‘Blues has always been here’ 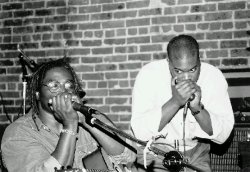 Just call them Charlie Parker and Dizzy Gillespie. Gary Wright and Phil Proctor (above) are part of the Red Bank band Terraplane Blues.

These words, like his music, come straight from the heart of Gary Wright, a 44-year-old Red Bank blues singer and guitarist who has dedicated his life to the art form of traditional Delta blues and its rich musical legacy.

"I remember I was about 3, and I heard this song ‘I Put a Spell on You,’ by Screamin’ Jay Hawkins," he said.

When Wright was a child, even his Sunday church experience included a main ingredient of the blues: black gospel music.

"I remember going to a Baptist church and hearing the music when I was little. I’ll never forget it," he said, "because I was dancing."

A few decades later, Wright remains true to his calling, singing the very music he grew up with. Through every popular music trend from the techno-pop and industrial music of the ’80s to grunge to Garbage and Ricky Martin, Wright has been singing the blues classics of Muddy Waters, Elmore James, Robert Johnson and B.B. King.

"It’s part of a rich culture," he added. "We should let it be heard, and not just on beer commercials."

The vehicle for Wright’s blend of original blues tunes and legendary classics is his band Terraplane Blues, a six-piece outfit that, in addition to himself on guitar and vocals, comprises his wife, vocalist Jennifer Wright; Philip Proctor on harmonica; Joseph Santora on guitar; Rod Rodelius on bass; and Debbie Shreck on drums.

Terraplane Blues can be heard every Wednesday night at 9 p.m. at Jason’s Jazz and Blues Night Club, Belmar. The band also plays regularly at Red Bank’s Walt Street Pub on Monmouth Street and at the Globe Bar and Grill on East Front Street. Every other Sunday (next on March 19), three members of the band — Wright, his wife and Proctor playing his harp — perform at a blues jam at the Downtown Cafe on West Front Street.

The band’s name comes from a song of the same name, written and recorded by Robert Johnson in 1936.

"The Terraplane was a high-performance car in the 1930s, made by the Hudson Motor Company," Wright said.

"The car is a metaphor for his girlfriend, whom he lost to another man. And now someone else is driving his car and his girl around," he explained with a slightly embarrassed laugh. 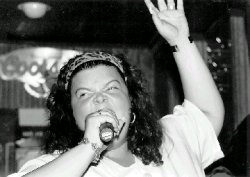 Jennifer Wright’s vocals (right)help drive the band’s bluesy spirit. Not pictured are three members of the band: Joseph Santora on guitar, Rod Rodelius on bass, and Debbie Shreck on drums.

"There’s more support for blues here in Red Bank, and Riverfest seems to get bigger every year," Wright said, referring to the annual jazz and blues festival held in Marine Park.

B.B. King, who is one of Wright’s favorites and one of the few surviving blues legends, recently played his annual gig at the Count Basie Theatre.

"I think B.B. said it best," Wright said, " ‘When you’re not singing, you’re singing through your guitar.’ "

With childlike enthusiasm, Wright describes the simple ingredients of the music that has brought comfort and joy to anybody who’s ever been down on their luck. Wright emphasized the role of passion and rhythm in blues music, which has its roots in Negro spirituals, gospel music and the emotional struggles of blacks, particularly in the South from the times of slavery and the Great Depression to the present day.

"It’s got a life force to it. You can’t take that and package it like a box of Wheaties, because it comes from the heart," he said. "It’s a part of me."

Wright’s passion and sincerity seem to reach listeners of all ages and ethnic backgrounds.

At a recent show at Jason’s Jazz and Blues Club, a 10-year-old guitar player, accompanied by his father, sat smiling and nodding his head to the rhythm, as a table of jazz musicians older than his father did the same.

As Wright says, "Blues is a universal form of music that everyone can relate to."

Wright spoke of the close relationship between blues music and jazz. He said that in terms of radio play and music television stations, both genres have received more attention in recent years as a result of the rerecording of classic blues hits such as those by Eric Clapton and the popularity of young retro swing bands like the Squirrel Nut Zippers.

"In some respects, John Coltrane influenced me, even though I’m not playing jazz," he said. "It’s an attitude.

"I don’t consider myself an accomplished harmonica player, but sometimes when Phil (Proctor) and I are playing together, I like to close my eyes and imagine that he’s Charlie Parker and I’m Dizzy Gillespie — even though we’re not," he said, laughing.

For a complete list of upcoming performance dates, or to find out how to get the Terraplane Blues CD Yesterday’s Blues, check out the band’s Web site at www.terraplaneblues.com.