Rubenstein gets revenge at Region 5 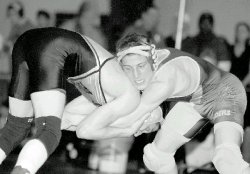 he 1999-2000 wrestling season was rolling along flawlessly for Dan Rubenstein. The North Brunswick Township High School senior had been undefeated at the 135-pound level, compiling some 25 pins or technical falls, and generally making mincemeat of opposing matmen. Then he ran into South Brunswick’s Anthony Fidacaro in the District 20 finals.

"When I wrestled Anthony I was nervous," said Rubenstein, who won the districts last year. "And he just went out there to beat me."

That he did, by a 10-8 overtime decision. Instead of caving, however, Rubenstein drew strength from his first defeat.

"Everyone said after that loss that it was better to lose in the districts than in the regions, and that the true mark of a champion is to come back from adversity," he said. "I got pumped up and got myself a better game plan."

It worked, as Rubenstein defeated Fidacaro by a 5-1 margin in a Region 5 rematch, then blew out Jared McCaffrey of Voorhees with a 15-0 technical fall to capture the regional championship and bring his record to 32-1.

"I got a four point lead right at the start over Anthony and I just sat on it," Rubenstein said. "Then in the finals I went out to go for it all."

Raider Coach Mark Salge agrees that the district loss turned out to be oddly fortuitous.

"They say everything happens for a reason," he said. "It’s good that the loss came when it did. It took some pressure off him for the regions.

"Dan’s been just unbelievable this year," added Salge. "He’s one three outstanding wrestler awards this year (for the Regions, and after winning the Greater Middlesex Conference and JFK Mustang Invitational tournaments)."

Rubenstein began wrestling at the age of 5, but really hit his stride in ninth grade.

"I started competing for clubs and in freestyle tournaments," he said. "Then I also wrestled as a freshman for the varsity team."

He was named Freshman of the Year by the squad, in fact, compiling a 6-1 record and then participating in some 100 matches during the off-season with his club, The Edge.

The next year, Rubenstein went 22-7 at 119, finishing second in the districts and fifth in the GMCs. He followed up that performance with a 29-5 effort as a junior 135-pounder, a campaign in which he won the districts, placed third in the regions and finished in the state’s top 12.

This year, his natural weight would be about 152, but Salge counseled him to stay in the 135-pound bracket.

"The hardest thing is keeping the weight down," said Rubenstein. "I eat a lot of salad and tuna, which provides the protein. And no soda. But it’s always better to cut weight. You’re always stronger."

Aside from weight maintenance, Rubenstein said the most difficult aspect of the sport is something he has yet to deal with.

"It would be very hard," he said, "to be wrestling for a team that didn’t have a lot of kids pushing you and rooting for you."

With hopes of attending Penn State or perhaps Rutgers next year, the future computer science major sets his more immediate sights on this weekend’s state tournament at the Meadowlands Continental Airlines Arena.