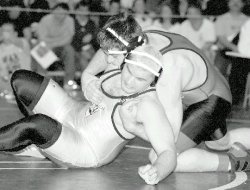 In a show of Viking solidarity at tournament time, each member of the South Brunswick High School wrestling team recently bleached his hair blond. It’s one of those zany, wacky things athletes do to pump themselves up, like butting helmets or wearing rally caps. Figuring it couldn’t hurt, Coach Joe Dougherty viewed the gesture with bemused tolerance, but he drew a line in the sand.

"They asked me over and over again if I’d bleach my own hair," Dougherty said. "And I said no. But they kept after me, so finally I said ‘Okay, if you win the districts, I’ll do it.’

"Needless to say," he adds, "I’m now a bleached blond, and so is the rest of the coaching staff. My wife won’t stop laughing."

To be sure, Dougherty’s grapplers were making merry themselves after the comeback victory over Old Bridge, which earned the Vikes their third straight District 20 championship. South Brunswick had trailed by 5.5 points going into the last three bouts, but first-period pins by senior 189-pounder Chris Watson and, at 215, his classmate Marc Tainow, clinched the crown.

"After losing to Old Bridge twice this year," said Dougherty, "beating them this time was very special. We’ve geared everything we’ve done toward performing well at this time of year."

He is referring to the post season tournaments. After a 16-3 dual meet season the Vikings crowned five District 20 champions who were joined by five more Vikings at the Region 5 competition.

In the opening round of Region 5 action, junior 112-pounder Mike Dougherty lost on a pin, but there were four South Brunswick winners, including sophomore Kevin Fox (140, by a pin), senior Titus Nielsen (145, by an 8-3 decision), junior Pete Gibb (160, by a 5-4 decision) and junior 171-pounder Blake Sframeli, who won by a pin.

The five district champs who went to the mat Friday night were Watson, Tainow, Junior Jad Duca at 119, sophomore Kyle Nasdeo, in 130-pound slot and senior Anthony Fidacaro, who was named outstanding wrestler of the district tourney, an honor he earned by upsetting previously-undefeated Dan Rubenstein of North Brunswick by a 10-8 score in the finale at 135.

That bout was an up-and-down affair, as Fidacaro, who had lost five times previously to Rubenstein, took a two point lead with one second left. But Rubenstein tied it sending the battle into overtime. After 34 seconds, Fidacaro took the Raider down to win the title.

"Before the districts I said that winning that tournament was not our goal," Dougherty said. "Our primary focus was to advance as many kids as we could into and through the regions."

Nasdeo was the only Viking to come away with a title at Region 5 with Tainow as the only other South Brunswick qualifier.

Duca lost a tough semifinal bout 7-5 to Somerville’s Phil Dibetta before falling to Old Bridge’s Mike Carro 4-2 in overtime in the third-place match.

Fidacaro was topped by Rubenstein 5-1 in the Region 5 semifinal and lost a 10-8 match to Joe Mastrogiovanni of Piscataway in the final.

Watson lost his semifinal match to Bridgewater’s Jacob Warta and was topped by Perth Amboy’s Danny DeJesus 12-6 in the third-place bout.

Tainow lost to Hunterdon Central’s Mike Carr, but came back to pin J.P. Stevens’ Tim Karmaszin in 1:20 to advance to the Super Region in Red Bank on Tuesday.

Nasdeo, by virtue of his Region 5 title was assured a trip to the state tournament at the Meadowlands Continental Airlines Arena this weekend. He stayed alive for a gold medal with an 11-9 win over Freehold Township’s Rob Morello.

Tainow was eliminated by Jackson’s Mike McCabe in the preliminary round of Super Regions.