Rumors cause some SBHS parents to panic 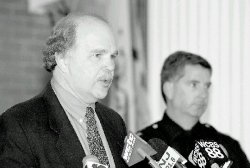 South Brunswick High School Principal Thomas Kietrys speaks at a news conference at the municipal building on Route 522 about a lockdown at the high school last week. Chief of Police Michael D. Paquette stands in the background.

The school was locked down for about two and a half hours as police and school officials investigated a false report of a gun being brought to school last Thursday.

Although the report turned out to be a hoax, about 150 anxious parents, reacting to rumors and early media reports, flocked to the Crossroads Middle School on Major Road to demand answers from police and Board of Education officials.

"Some of the reports were saying that shots were fired at the school," South Brunswick Police Lt. Ron Schmalz, the department’s public information officer, said.

Schmalz said that the parents were calmed once they were updated on what was really going on at the high school.

Police ended the lockdown at 10:45 a.m. when they determined the threat to be a hoax, and the school returned to its normal full day schedule.

According to Schmalz, sketchy news reports early on during the incident, and word-of-mouth rumors, gave parents several different pictures of the incident, many of them inaccurate.

Reporters from several news organizations arrived on the scene shortly after the lockdown started at 8:15 a.m., and one radio station provided live updates on the situation, Schmalz said.

Reporters used information provided by students calling out of the building on cellular phones, or their parents, for their reports.

"It is like the game of telephone," Schmalz said during a news conference at the municipal building following the incident.

In the game, one person in a line tells the next person a story and each person relays it in turn. By the time you get to the last person, the story has changed, sometimes dramatically.

By the time the news conference was called, between 11 a.m. and noon, about 25 reporters from around the region had filled the main meeting room for the official briefing.

"Word does get out," high school Principal Thomas Kietrys said following the conference.

Kietrys said that school policy does not allow cellular phones or pagers to be used by students in the building, but that consequences are not severe for those students who continue to use them during school.

"We certainly won’t frisk anybody," he said, adding that the devices should be kept in students’ lockers.

Kietrys said that he hoped that the events of the day would show students the dangers of giving out misinformation.

"They need to be accurate in their communications," Kietrys said.