FREEHOLD — Few third-generation enterprises that have evolved since World War II have been more involved with the renaissance of the county seat’s downtown business district than Ace Aluminum on the South Street side of the Market Yard.

The firm’s president, Barry Fisher, 56, of Marlboro, as was his father before him, and as his son, David, 26, is expected to be, have been key players in attempting to improve the business atmosphere in downtown Freehold.

Gustave Fisher, who started the business in the early 1950s, was born in Austria, emigrated to England and then to Brooklyn, N.Y., in the mid-1940s, before arriving in the Freehold area.

"My father was actually an accountant with Brooklyn Jewish Hospital," Barry Fisher recalled in a recent conversation. "Then he became involved in the home improvement business with an uncle in Long Island."

It was not long before the elder Fisher moved to Western Monmouth County, where he started an egg farm on Robertsville Road in Freehold Township. 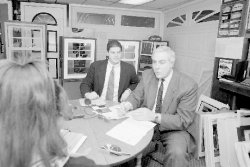 JERRY WOLKOWITZ
Barry Fisher and his son, David, talk with a customer at Ace Aluminum Products, Freehold Borough. David, the firm’s vice president, is the latest family member to join the business. Barry Fisher is president of the company that his father, Gustave, founded in the 1950s.

"The farm was not doing well," Fisher said. "My father discovered that line of business was for the birds, and he got out of it."

In the early 1950s, Gustave Fisher got involved in the home improvement business, opening a store on South Street in the vicinity of where Freehold Glass is now located. Family members were part of the business, according to his son.

"My father started by selling to local farmers such things as storm windows and doors," Fisher said. "We eventually moved to our current location in the Market Yard in 1962. I became a partner in the business in the 1960s. The business started as Ace Home Improvements and later was changed to our current name, Ace Aluminum Products. Although a lot of products are not aluminum now, we have kept the name Ace Aluminum because that is what people have always known us as."

Barry said his father, who died in 1977 at the age of 74, got into the business at the right time and business flourished right from the beginning.

"By the 1950s, aluminum was the big thing in siding for buildings, and my father was right there with the product," Fisher said

He recalls that his father was one of the movers and shakers in the town’s business development in the 1960s as a member of a downtown merchants organization.

"My father was a proponent of the Urban Renewal Program, a federal program during the 1960s," Fisher said. "It almost became a reality but was narrowly defeated by the Borough Council. It would have had an impact on Market Yard and Mechanic Street businesses, right in the vicinity of where our business is located."

In the 1980s, Barry Fisher followed in his father’s footsteps, becoming actively involved with business development in the downtown area. In the mid-1980s, Fisher became a member of the now-defunct Economic Development Committee, an advisory body to the council.

Fisher and other members of the committee, including James Mancini and Paul DeJesse, developed proposals to help alleviate parking problems in the downtown area. Their proposals would have included the creation of an indoor parking facility, although that never materialized.

Through the partnership’s efforts, a Special Improvement District was created and implemented in 1992 to oversee activities in the downtown area.

Now, David Fisher has joined his father in the family business as vice president of Ace Aluminum.

Before joining the family business in January, David had been working with an accounting firm in New York City. While he still lives in Manhattan and commutes to Freehold, he said he plans to relocate to this area in the near future.

David, who grew up in Marlboro, attended Rutgers Prep in Somerset and graduated from the University of Maryland, College Park, with a bachelor of science degree in accounting.

His specialty in the business will be developing computer programs which will be geared toward designing home im-provements for customers using company products.

In becoming the third generation of his family to join Ace Aluminum, David will help launch the family business into the 21st century with the latest technology.