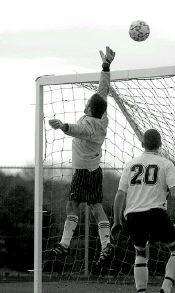 Colts Neck may have won Friday’s Central Jersey Group I championship game, 4-1, but it didn’t keep South River Coach Eric Clays from believing that his Rams were winners as well.

"I can’t find any fault with our effort," Clays pointed out. "The kids left their hearts on the field. It’s easy to walk off the field with my head high after they played like that. They kept fighting the entire game. I applaud them."

The Rams provided the surprise of the state sectional tournament by upsetting the top seed, Highland Park, in the semifinals. That win took the Rams to Colts Neck to play the No. 2 seed for the sectional crown.

The momentum the Rams had built up with two tournament wins was more than neutralized by the swift wings of the Colts Neck Cougars. Right from the start of the match, the Cougars were attacking on the wings and had the Rams on the defensive. It led to a very quick goal. 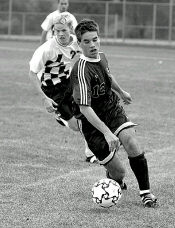 Just 2:25 into the game a hand ball in the penalty area gave the Cougars a penalty kick. Ryan Sova, one of the forwards who had been getting behind the Rams’ defense, converted the penalty kick with a low line-drive into the right-hand corner of the net.

Although the Cougars had the wind in their faces in the first half, they were able to be the more aggressive team, consistently taking the ball to the net.

It looked like South River would be in for a long day when the Cougar defense made a mistake. They failed to clear a ball deep in their own end, and Iuri Pinto was there to make them pay for it. He chipped the ball over Cougar goalie Christian Roche, who was caught between a rock and a hard place on the play. Roche left the net in an effort to get the loose ball, but Pinto beat him to it and showed great touch in lofting the shot for the equalizer 21:31 into the match.

The second-seeded Cougars, making their second appearance in the state playoffs and their first in the state sectional finals, did not lose their edge after giving up the tying goal. Sal Avino put the home team up 2-1 in the 33rd minute.

South River had one more chance to tie it shortly afterward when the Cougars again misplayed a ball in their end of the field. Felix Danso broke through the Cougars’ defense on the right wing and headed toward Roche one-on-one. However, the Cougar held his ground and a made tough save to keep Colts Neck up 2-1.

Before the half was over, the Cougars put their stamp on the game when Sova struck again, scoring off a play that started with an outstanding upfield run by Frank Caltigirone. That gave them a 3-1 lead at halftime.

Trailing by two and going into the wind in the second half, the Rams did what they could to get back into the game, even moving everyone up to try and create scoring chances. But they were unable to sustain the pressure on the Cougars, who seemed one step ahead.

"Their speed gave us trouble," said Clays. "Both Highland Park and Colts Neck were excellent teams that were well coached. Colts Neck’s speed was the difference."

Defense was South River’s strength in 2000, led by sweeper Pedro Marques and fullbacks Thiago Lopes and Rahul Shah. Goalie Nelson Marques played well and kept the Rams in games. The Cougars were able to strike at the Rams’ strength with athleticism.

Midfielders Mario Nawrocki, Ryan Jones, Jonathan Krempecki, Martin Petrik and Pinto were solid two-way players who could help out on defense as well as force the attack.

South River finished the season at 12-10-3, but the team proved it was much better than its record. Clays said an upgraded schedule may have hurt the team’s win-loss record, but made them a dangerous tournament team.

"We played a lot of quality teams this year," he said. "It gave us some losses but it helped us become a better team.

"I thought that if we made the state tournament, we could be a handful because of the quality of the teams we had played," he added.

One thing that was consistent about South River all year was their effort.

"We lost two all-state kids to graduation who were tough to replace," Clays remarked. "We had no superstars and weren’t loaded with talent. What we were is a blue-collar team that tried to outwork people.

"We’re a young team that should be strong next year if everyone continues to work hard," he said.