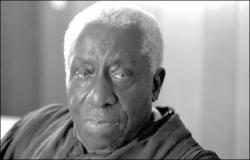 FARRAH MAFFAI In the 1970s, Philip N. Gumbs of Aberdeen went from being mayor of Aberdeen (then Matawan) Township, director of the Monmouth County Board of Freeholders, to a state workers’ compensation judge, a position he held for 25 years until his retirement yesterday.

From his days playing baseball in Cliffwood and running through farm fields to his days on the judge’s bench, where he spent the past 25 years, Gumbs has seen a great deal during his time in the township.

"Before Strathmore, everything was farmlands," said the lifelong resident. "When Strathmore and the developments came, the population of the town more than doubled and we needed to build everything new — we needed new roads, sewers, and five new schools.

"There had to be so many changes," he added.

Although Gumbs said he did not feel a strong pull to run for office at the time, he accepted the nomination when the local Democratic Party asked him to run for mayor of then Matawan Township.

Holding a law degree and being part of a successful partnership in a Keyport law firm, serving in the Pacific theater building air fields during World War II, and having an extensive knowledge of the community in which he was raised and chose to return to, Gumbs figured there probably was no one who could serve the town better.

"I said to myself, all these other fellows can run for office, so I can as well," he recalled.

Successful in his bid for municipal office, Gumbs was serving as Matawan [now Aberdeen] Township’s first black mayor, from 1972-1974, when the county Democratic Party asked him to run for freeholder.

No longer a reluctant politician, Gumbs accepted the bid and went on to win a spot on the Monmouth County Board of Freeholders, where he became the first black freeholder director.

"Monmouth County was largely Republican, and a Democrat hadn’t won in years," Gumbs said. "Everyone was so surprised when I won. At that time the county was growing quickly and, coming from a township that had had a population explosion, I understood how to deal with that."

Gumbs, who ran on a ticket headed by Gov. Brendan Byrne, caught the eye of some influential people in state politics during his short tenure on the board of freeholders.

Byrne offered the young, budding politician a seat on the judge’s bench, which he accepted — although it meant the end of his short, but successful, political career.

"I think, had I not become a judge, I probably would have gone on to run for state Assembly or Senate. Who knows what would have happened," said Gumbs.

"I chose to sit on the bench. Politics is variable. You might not be there tomorrow."

After accepting the appointment, Gumbs spent the next 25 years as a workers’ compensation judge in New Brunswick, Newark, Freehold and Toms River. He officially retired yesterday, Jan. 1.

Although he took himself out of the political arena, Gumbs remained involved in the local community, serving as chairman of the board of trustees of St. Mark’s AME Zion Church in Cliffwood, where he also taught Sunday school.

"Growing up back in Cliffwood when I did, I never dreamed I would be as successful as I’ve been. My parents insisted I get an education and study, and I took advantage of that," said Gumbs, who urges all the children he taught in Sunday school over the past 30 years to do the same.

"With all I’ve done, one of the things that makes me the most proud is watching some of the kids that I’ve taught go on to have success in their lives," he said, noting the presence of many doctors, lawyers and military officers among the young men and women he taught.

Looking back, Gumbs said he misses the old Aberdeen sometimes, but that the new one has its perks as well.

"Sometimes I miss the open fields where we would have to make our own baseball fields when I was a kid. We would spend all day out there," said Gumbs. "But I look around at everything today, and I can say I helped do that."