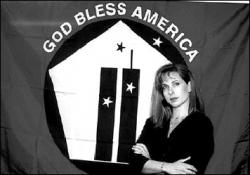 Gwen Loiacono stands next to the Remembrance Flag she created to honor the victims of the Sept. 11 terrorist attacks on America.

A vision in one woman’s dream, experienced a week after the tragic events of Sept. 11, has now become a means of honoring and remembering the victims who perished in the disaster.

Former Freehold Township resident Gwen Loiacono, who now lives in Wilmington, N.C., and owns a flag company, Cono Flags, with her husband, Richard, said she was overcome with grief and a feeling of helplessness about a week after the attack on America.

She recalled how one night before going to sleep she prayed, asking God to show her what she could do to help the families in some way.

"That night I had an incredibly realistic dream about walking in New York City at ground zero. I saw all the rubble from the fallen tower," Loiacono explained. "I was amazed at all the debris that surrounded me. I looked up and saw a huge flagpole right in the center of the debris. My eyes then glanced up to the top of the flagpole where I saw a large American flag flying, backlit by the sun. Then I saw another flag flying beside it. It was what is now known as the Remembrance Flag."

She said her husband was very excited about her dream and her sketch and insisted that they go to the shop immediately and design the flag on a computer.

Loiacono explained the meaning of her flag design.

"The red background of the flag symbolizes the lost lives and bloodshed of our fellow Americans, past, present and future," Loiacono said. "The pentagon and two rectangles represent three of the most recognized structures on United States soil. The stars symbolize the airplanes that were needlessly sacrificed.

Loiacono added that the "God Bless America" slogan has been adopted to represent the hope and faith of the nation.

That weekend the couple made a prototype of the flag and sent one to President George W. Bush. This was done before the end of September.

Loiacono said she ordered 200 flags in September to present to politicians, police stations and fire stations.

"By the time those flags arrived on Dec. 11 things had already moved in a different direction," she said.

She explained that an old friend from New Jersey, Karen Codacovi, of Freehold, called, and after Loiacono told her about the "flag project," she said her friend began telling everyone "up North" about it.

"Two days later I received a call from Monica Iken, who is the founder of the organization ‘September’s Mission’ in New York City," Loiacono said.

In a conversation with Greater Media Newspapers, Iken, 31, said her late husband Michael, 37, was working on the 84th floor of one of the twin towers at the World Trade Center when the aerial terrorist attack was launched on the building.

According to Loiacono, her meeting with Iken occurred through a mutual friend. As a result of the events of Sept. 11, Iken’s foundation is seeking to have a memorial built on the site of the World Trade Center.

"We want a memorial built to represent our loved ones," Iken said, explaining that the foundation is seeking to have 16 acres of the site set aside to create a monument, a museum and a park.

"We need to do this for the children. There are 10,000 children who have been directly affected by this tragedy," Iken explained.

Iken said she plans to help to promote the Remembrance Flag as a means to help fund September’s Mission’s cause.

Loiacono said the net proceeds from the sale of the Remembrance Flag will go to four large organizations at this time; September’s Mission, Give Your Voice, the Sept. 11 Widows and Victims Family Association and the World Trade Center United Family Group.

"All of these groups want to adopt the Remembrance Flag to help with their fund-raising efforts," she explained, noting that 50 percent of the profits will be donated to the four organizations and 50 percent will donated to other charities such as the United Way, the American Red Cross and the Salvation Army.

"I don’t want it to be commercialized," Loiacono said. "I just want the flag to memorialize the events so that the victims are never forgotten."

All 200 flags that were initially produced have been distributed. The flag company is now taking orders for the future.

"We want every family to have a Remembrance Flag before Sept. 11, 2002 so that everyone can fly the flag on the anniversary to honor their loved ones," she said.

The flag Loiacono saw in her dream is now flying at many locations. Locally, it can be seen on at the Freehold Center for Health and Wellness, Route 33, Freehold.

Loiacono said any corporation or individual may sponsor a victim for $25. A flag will then be sent to the victim’s family with the corporation’s name or the individual’s name printed on it.

Loiacono said she never imagined that the visual image in her dream would take on such a diverse direction, and she said she is very happy that she is able to do "something to help," which is what she prayed for the night she experienced her propitious dream.

She said she recently received a call from first lady Laura Bush’s press secretary asking for information about the Remembrance Flag as well.