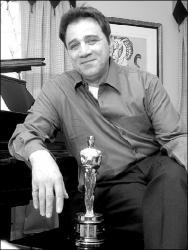 JERRY WOLKOWITZ Franke Previte shows off the Academy Award he won in 1987 for the song “(I’ve Had) the Time of My Life” from the movie Dirty Dancing. At right is the platinum record that hangs in his Middletown home.

It was the last song submitted for the movie’s final scene, and Franke Previte’s tune galvanized the cast of Dirty Dancing and helped make the movie a huge box office hit.

"(I’ve Had) the Time of My Life" turned out to be the song that would define the coming-of-age romance for the actors (and audiences), but the Oscar-winning songwriter didn’t find that out until the night of the Academy Awards ceremony in 1987.

"I didn’t meet Patrick Swayze until the Academy Awards ceremony, and when we met, he said, ‘I need to know who did the demo tape.’ I said, " ‘I did. Why?’" Previte recounted.

"Because we filmed out of sequence and that last scene was the first thing we filmed," the Dirty Dancing star told him. "We didn’t have our song, and a tape came in. It was the last tape on the last day, and that tape had four songs on it. ‘Time of My Life’ was the fourth song — the 150th song submitted. 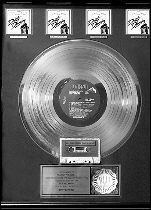 "As soon as it played, everyone knew that was our song," Swayze continued. "We filmed that day to your demo, and it created a camaraderie we didn’t have before. The scene came out so phenomenal it created the rest of what you know Dirty Dancing to be because we knew we had this tremendous ending."

The Academy Award for Best Original Song in 1987 came after Previte, along with composers John DeNicola and Donald Markowitz, garnered a 1987 Golden Globe Award from the Hollywood Foreign Press Association for Best Original Song in a Motion Picture and a Grammy nomination from the National Academy of Recording Arts and Sciences the same year for Best Song Written for a Motion Picture.

"My dream was that one day I would get nominated for a Grammy, so winning an Academy Award, a Golden Globe and a Grammy nomination was beyond my dream," said Previte.

In 1988, the American Society of Composers, Authors and Publishers recognized "Time of My Life" as Song of the Year.

"It was played 1 million times that year, the most-played song in the country," explained the Navesink resident.

To date, 42 million copies of the song have been sold.

Previte, who also wrote the hit "Hungry Eyes" for the movie, admits he was stunned by the announcement his song had won an Oscar, even though he was psyched to win.

"I hate to say this, it sounds pompous, but after we got nominated, I visualized myself winning the award. I felt so positive about it," he said. "So I sat there, and they said my name, and even with thinking I was going to get it, I was in shock."

With barely a minute in which to thank others for their help, Previte credited the man responsible for prompting him to write the song for Dirty Dancing.

"I thanked Jimmy Einner, president of Millennium Records," Previte said. "He called me and said, ‘I want you to write a song for this movie.’ I said, ‘Jimmy I’m trying to get a record deal, I don’t have the time,’" Previte said.

Einner told him, "You make the time. This is going to change your life."

"He told me the deal was that I had only two weeks to write the song and there were 146 songs submitted already for the movie’s final scene," added Previte, who asked what the movie was about and got a five-minute briefing.

With no script to draw on, he put a track together and called Einner back.

"I played it for him over the phone, and he liked it," said Previte, who spent the next two weeks in pursuit of inspiration.

Soon after submitting the song, Previte heard from the film company. "I got a call from the choreographer for the film," he said. "He’s screaming on the other end of the phone. ‘You did it!’"

For the Oscar ceremony, Previte had to wangle an extra ticket so that both of his parents could attend. His father, a professional opera singer, and his mother, also a vocalist, had met while taking voice lessons.

"There was always music at home," Previte recalled about his boyhood in New Brunswick. "Music was there all the time, and it was so easy for me to have that in me."

With his parents’ encouragement, Previte sang in choirs and at benefits, and that experience reverberated throughout his life.

"There was no question in my mind. I always knew that was what I wanted to do," he said.

When he was in high school, Previte wasn’t interested in looking at colleges like other high school seniors.

"I wanted to be a singer. That’s all I wanted to be. My parents said, ‘Get an education, and you can be anything you want to be.’ So I went to college and was a business major," he said.

The day he was supposed to graduate, Previte was on the road in Boston with his band the Oxford Watch, which signed with Mercury Records.

"It seemed like for whatever reason, there was this destiny I was to fulfill. I felt driven to do this," he explained.

"It was a heavy riff-rock group, and the sound was loud, very loud, driving music," Previte said. "The music drove us so hard."

After two years and two albums, Previte’s voice was getting tired, and when the group broke up, he moved back home, where a relative helped him refine his musical talent.

"For six months my cousin, Dusty Micale, sat with me and taught me music theory," he recounted. "I would tell him the music I heard in my head, and he would tell me what the chord changes were that I was playing."

By the early ’80s, Previte was vocalist/songwriter for the band Frankie and the Knockouts. The group was signed by Millennium, and their hits included "Sweetheart," which reached No. 9 on the Top 10 charts before the group disbanded in 1985.

By the time Dirty Dancing came along, Previte was ready to put the demands of performing behind him.

"Performing is a great drain. There’s no time to be creative," he explained.

Winning an Oscar changed his life in predictable ways.

"Now I can work on projects that I love, and I can be very selective. It gave me financial security, and it opened major doors the day after I won the Oscar," explained Previte, who, in short order, was asked to write songs for other movies and currently has songs in several upcoming films.

"I write when I have a project," he noted. "I don’t pressure myself. If I can get a chorus, a verse or three lines that day, I’m happy. It flows through me when it decides to flow through me."

His focus these days is on mentoring young bands and bringing the fun and excitement of music to a children’s arts project, the Children’s Cultural Center at Red Bank, for which he is a board member.

Previte remains somewhat in awe of having touched so many lives with his hit tune.

"People come up to me and say ‘The Time of My Life’ was their wedding song, their song at graduation, a song they share with their girlfriend or boyfriend. Somehow it touches their lives," he said.

"When I see royalty statements from Hong Kong, Russia, Spain, Italy, from all over," he said, "I say, ‘My God, how many people are listening to what I had to say?’"