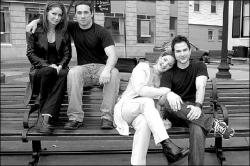 FARRAH MAFFAI Members of the cast of Never Among Friends, to be filmed in the Freehold area this summer, include (l-r) Debra Yeskel, Kevin Interdonato, Natalie Durante and Pete Capella.

FREEHOLD — Smile, Freehold! You never know who may be watching you!

Beginning on May 25, if you’re walking around town, make sure you have your makeup on if you’re a gal and at least your comb with you if you’re a guy. You may be caught either inadvertently or intentionally by filmmaker Jason M. Allentoff and end up having your "mug" in a motion picture he’s filming in the borough.

Freehold Borough, which served as the backdrop for the movie Grownups when that was filmed in the summer of 2000, will once again be featured in the film Never Among Friends.

Grownups is currently being shown at film festivals as its producers pursue a distribution deal.

Never Among Friends, a feature-length film to be shot on digital video in the borough, is co-written by Allentoff and Roger Troy Schneider, directed by Allentoff, and produced by Jason L. Liebman.

According to a press release, Allentoff has studied film and television production for eight years. Allentoff, a graduate of Freehold Township High School and a resident of Howell, has done many short videos and documentaries, including one that featured interviews with Katie Couric and Matt Lauer of the Today show. He was born in Brooklyn, N.Y., and has lived in Howell for the last 11 years.

The writing process for the 81-page screenplay written by Allentoff and Schneider began on Jan. 16 and was completed by March 3. The two writers were friends all through their years at Freehold Township High School.

Liebman, the film’s producer, has written two unproduced screenplays and was an associate producer on Grownups. He is also currently producing a documentary about the Fire Department of New York and the events of Sept. 11.

According to Allentoff, auditions for the cast of Never Among Friends were held on March 9 at the Freehold Township municipal building. Members of the cast include Peter Capella, who plays Steve Wilson. A Middletown resident, Capella has been featured in commercials and television pilots. He teaches acting and improvisation at the Sandy Roeser Studio in Red Bank.

Kevin Interdonato will play Sean Glen. He has starred in five independent films and has been featured on the daytime dramas One Life to Live and As the World Turns.

Natalie Durante will portray Jane Rumsfield. A graduate of Marlboro High School, Durante made her film debut in the independent film Nostalgic Poison.

According to the film’s producers, the movie is about friendship and betrayal.

"Steve Wilson is 22 years old and on top of the world. He’s just graduated college, has a beautiful girlfriend and a publisher has just picked up his first novel," the producers said. "Steve’s best friend, Sean, on the other hand, hasn’t been so lucky. A car crash has cut short his promising baseball career, and with his dream of playing in the major leagues destroyed, Sean turns to alcohol. His shiftlessness and his drinking have begun to jeopardize his relationship with his sultry girlfriend, Tracy, with whom Steve is secretly infatuated. Seduction strikes and Steve’s and Sean’s lives may never be the same again."

According to the press release, upon completion of the film, the production team plans to submit the movie to film festivals around the country.

Allentoff said the cast and crew are all volunteers for this production. He said there will be ample opportunity for "extras" to get involved with the film. The film team plans to announce an open meeting for anyone who wants to join the group of extras in the movie.

Allentoff said Freehold is a very important "character" in the film. He said Freehold Borough and Freehold Township, where some scenes will also be filmed, will serve as the perfect locations for what he said the filmmakers are trying to achieve.

According to the press release, "Free-hold Center is also very important to the plot. A few sequences take place on the street and various businesses, including the Court Jester and the Main Street Bistro restaurants and the Especially For You florist shop.

According to the release, other confirmed filming locations for the movie include Easy Video, Hands On nail salon, Baccio’s Ristorante and Sunquest tanning salon.

Speaking about the filming of another movie in the borough, Mayor Michael Wil-son said, "Anything that helps to put Free-hold on the map is a great thing." With a touch of levity, the mayor said the borough may well be "the Hollywood of western Monmouth County."

Wilson said having a movie filmed in the town is a great idea.

"We’re the hub of western Monmouth," Wilson said. "We have a downtown area which they can enjoy and set up the movie. Our town is a perfect tangible reminder of the way things used to be. We are ‘Down-town USA.’ "