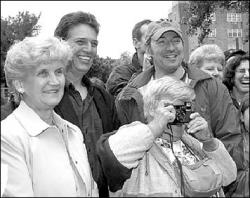 JERRY WOLKOWITZ Smiles were the order of the day on Saturday when friends and family members gathered at Center and Jackson streets in Freehold Borough to dedicate Vinyard Park. Two people on hand, (l-r) George Theiss and Bruce Springsteen, were members of the Castiles, a band managed by the late Tex Vinyard.

FREEHOLD — A park across from the Rug Mill Towers at Jackson and Center streets was dedicated on Saturday to a couple native son Bruce Springsteen called "two of the unsung heroes of rock and roll."

In a ceremony held by borough officials at the site of what will now be known as Vinyard Park, two people who nurtured the career of young musicians in the late 1960s, most notably Freehold’s own Bruce Springsteen, were honored.

After a pounding rainfall, the cold dampness of the late-morning air did nothing to dampen the spirits of those who came to honor Marion Vinyard and the memory of her late husband Tex.

Marion was escorted down Center Street to the site of the park by two people she endearingly referred to as her "boys," Springsteen and George Theiss. 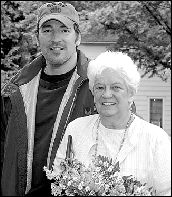 JERRY WOLKOWITZ Bruce Springsteen joins Marion Vinyard for ceremonies dedicating Vinyard Park in Freehold Borough to Marion and her late husband, Tex. In the 1960s the couple offered their home to Freehold’s teen bands as a place to practice and hang out.

Springsteen and Theiss, both acting more like Marion’s sons, were close by for the ceremony — two kids who made music due, in part, to the kindness, compassion and open hearts of the Vinyards.

The couple lived in a house that once stood on the site the park now occupies. The home, torn down in the 1970s, was once a "safe haven" for young musicians to practice, to hang out and to study their craft in an atmosphere made conducive to their work by the motivation and encouragement of Tex as well as the gracious nurturing support from his wife Marion.

The story goes that Tex walked into the duplex next door, where Bart Haynes lived. Haynes was the drummer for the Castiles. Tex told the kids to turn down the music. Theiss suggested that Tex might want to help out by managing the band.

Tex accepted the offer and shortly thereafter the teen-age Bruce Springsteen auditioned for and earned himself a spot in the Castiles.

The Vinyards’ home eventually swelled with the music of young neighborhood bands reaching for a dream as well as local kids who came to listen to the music and hang out on the porch. The young couple helped these musicians walk in stardust and opened their home to others who just wanted to be a part of the magic.

On Saturday, friends and residents came to honor Marion and Tex. All in attendance agreed that by giving of themselves with no hidden agenda they helped to create a legacy of music that will live on forever.

Following the unveiling of the Vinyard Park sign, the event moved into the new YMCA of Western Monmouth County community center in the Rug Mill Towers.

Mayor Michael Wilson, a friend of the Vinyards, was admittedly one of the kids "hanging out" at their home. The town’s mayor was once the lead singer in a band called Legend and the Vinyards’ home holds special memories for him.

Wilson told the audience as he directly faced Springsteen that they were all standing in "the old textile mill across the railroad tracks." No one needed any explan-ation. The moment was almost spiritual for those who remembered the mill the way it had been when Springsteen wrote about it in his song "My Hometown."

Wilson shared memories of growing up in what he said was a "great time in the 1960s." He also remembered Haynes, the original drummer for the Castiles who was killed in Vietnam in 1967 at the age of 19.

"Marion and Tex were like our second parents," Wilson said. "They kept us off the streets. Some of us became very successful," he smiled, then looked at Spring-steen, and added, "and some of us became mayors. Tex and Marion will always have a special place in the history of Freehold Borough. We love you, Marion."

Borough Councilman Kevin Coyne, the town’s historian, presented Vinyard with a plaque recognizing the contribution of the couple to the town and to music.

"Some people are known for deeds that go well beyond themselves," Coyne began. "We have a rare and rich community because of people like Marion and Tex who opened their lives, their homes and hearts with a generosity of spirit. Young musicians had a place to practice and an opportunity to be with people who believed in them, including one of the most important artists in American culture."

Coyne said the credit for the idea to dedicate the park to the Vinyards went to Carl Beams, a native of the borough who suggested it to Coyne in a casual conversation one day.

Vinyard accepted a bouquet of flowers and told those in attendance she was "so very honored" with the tribute. In a later conversation, she said she knew Tex would have been very excited and happy about the occasion.

Wilson then called Theiss to the front of the room.

Theiss jokingly told the audience that everyone who preceded him had "stolen all his lines."

"Marion fed us, she talked to us and Tex bought us strings, amps and anything we needed to make music," he said. "Their presence in my life affected me so much."

The musician thanked the Borough Council and mayor, saying, "It’s wonderful to be doing something like this for Marion and Tex. It makes me very proud."

Last on the roster of speakers was the "Boss." Springsteen began by stating that if Tex were here today he would have been "insufferable," teasing that he was known good-naturedly as a "grump." Looking at Marion, he said the park should have been named St. Marion’s.

"Tex and Marion opened their house, their hearts and their wallets," Springsteen began. "They came in and let us turn the music up when all the other adults told us to turn it down."

Springsteen told the group that what happened at the Vinyards’ home was a very unusual situation.

"I’m sure there are some mirrors of what went on here in other towns all over," he said, citing that Tex and Marion, along with others who followed their path, were the "unsung heroes of rock and roll."

"They gave us a chance to hone our craft. Every Friday after Tex got his paycheck, he’d go out and buy us microphones, guitar strings, whatever we needed. And long after Tex stopped managing my band, I went to him for help. I once needed a co-signer for a loan, and he put his name on that piece of paper while I promised to make the payments," Spring-steen said.

Springsteen then became serious as he tried to express the depth of his feelings for the couple and for their presence in his life.

"It’s a very unusual thing. I don’t think I can quantify how much they meant to my musical development and to my life in general," he said. "The texture of the town you grow up in becomes a part of who you are internally, and I’ve carried this with me long after I moved out of Freehold."

He suddenly became reflective and looking up, appearing momentarily distant, said, "In my mind, I can still see the open windows in this building and hear the clanging of the looms."

The musician expressed his heartfelt thanks to the Vinyards for their kindness, compassion and understanding and said they were a very important part of his life.

Springsteen then turned and lovingly embraced the woman who had not only been such a presence in his young life but remains so today and said, "I’m very happy for you, Marion, and I love you so much."