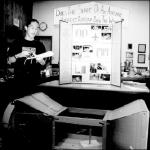 DAVE BENJAMIN Manalapan Englishtown Middle School pupil Richard Lin explains his project, “Does the Shape of an Airplane Affect the Airflow Over the Wings?” Richard constructed two models which he tested in a wind tunnel he built.

At a recent meeting of the Manalapan-Englishtown Regional School District Board of Education, the students presented their projects.

White said, "Project Science is a very special class for any student who chooses to be in the class. It is an opportunity for [students] to do their own scientific research project on any topic that they choose."

The students follow the scientific method, choosing a hypothesis, designing their experiment, collecting data, organizing the data and then drawing conclusions and reporting back to the class.

Richard Lin described his aerodynamics project, "Does the Shape of an Airplane Affect the Airflow Over the Wings?" He described the historical aspects of his project dating back to the 1950s when the United States Air Force conducted experiments on different aircraft designs.

Richard described two types of airplanes, the conventional design and the flying wing design, using models he built. He said he wanted to see if there was a difference in the airflow over the wings of the two types of planes.

Richard built his own wind tunnel and two model airplanes which he built to aerodynamic specifications. He attached strings to each plane at six points so that he could measure the airflow in the wind tunnel. He then showed graphs with his results and explained what the results meant.

Richard concluded that after all of his hard work, his results were inconclusive.

"There was such a small difference between the two airplanes that I could not make a definite conclusion," he told the board.

Richard said he is contemplating a future in the Air Force or the Marines where he can apply engineering skills.

Matthew Panariello described his project, "Is it More Efficient to Use an Unfamiliar Computer Program or Pencil and Paper to Solve Problems with Geo-metric Shapes?"

Matthew said that when most people get a new computer program, they don’t read the instruction manual.

"I know that I don’t," said the eighth- grader.

Matthew said he created his own computer program using Excel and Visual Basic. He said his program was designed to solve problems involving properties of eight geometric shapes, noting as examples the area of a circle or the volume of a cube.

Using eight students from a fifth grade science class as test subjects, he divided the students into two groups. Some subjects used only pencil and paper to solve the equation problems, and other youngsters used the computer program.

Matthew collected his data in chart form after repeating the process several times. He found that the computer group did far better than the paper and pencil group.

He concluded, "Even though people don’t generally read the instruction manuals on how to use computer programs, the manual can be very helpful."

Jason Flamendorf presented "How the Curvature of a Bean Plant is Affected By the Size of its Stem." He explained how four different kinds of hormones trigger changes in plants and plant activities. He also noted the effects of light, shining a light on one side of the plant compared to shining a uniform light on the bean plant.

Jason said he became interested in the project after watching the plants in his home. In the process, he germinated nine lima bean seeds and transplanted them into cups of potting soil. He divided the plants into three groups. The first group was the control group. The second group was treated with indoleacetic acid on the dark side. In the third group the acid was applied to the side, where the light was shining.

Jason recorded his data using angles and curvature lines. Additionally, he photographed his subjects, the beans, and made a photo album to use as a visual representation of his project.

He said he got the idea by watching road crews use salt during the winter. Rohit said he wondered if the salt was used just for friction or if the salt had a chemical reaction on the ice.

He took two bowls and poured 200 milliliters of water into each one. In one bowl he put 20 milliliters of salt. He added one ice cube to each bowl, both cubes being the same size, and tested which ice cube melted faster.

The youngster said he realized while he was doing his project that when the salt was added to the water, it created a brine which made a lower freezing temperature than normal water.

"When you add salt it, can bring it down to negative four degrees," said Sharma. "It made the water less resistant to get colder faster. So it melted the ice quicker."

Kyle Caputo, another eighth-grade winning science student, was not available for the presentation to the board.