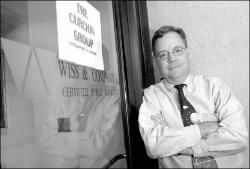 VERONICA YANKOWSKI Bob Fouratt stands at the front door of the office that will house the now separated companies, the Curchin Group and Wiss & Co.

Like marriages, some mergers are made in heaven, but two local accounting firms found their union wasn’t and have decided to call it off.

After just two and a half years, partners Curchin & Co., Red Bank, and Wiss & Co., Livingston, decided their practices weren’t compatible and dissolved their merger effective July 1. The two firms merged in January 2000 under the Wiss & Co. name.

Clients of Curchin recently received a letter informing them that the four original partners were reviving the Curchin name and starting a new firm, The Curchin Group LLC. The partners of Curchin are Robert C. Fouratt, Douglas P. Stives, David L. Ferullo and Peter Pfister.

"We returned to the name because it is so well-known in the community," said Fouratt, who is managing partner.

The firm will remain in its present offices at 125 Half Mile Road in Red Bank and will retain files, including computer records, of its 2,800 clients throughout the state.

"There were no legal issues (between the companies)," he said. "It was a difference of style, not substance. There were no accounting practices we were uncomfortable with.

"They’re a much larger firm from a different part of the state, and our cultures were dramatically different," he added.

"The atmosphere of the firm was certainly different from what our culture was here in our Red Bank office," Fouratt said. "Things were a little more impersonal. I think it had to do with their size. That gap between our cultures was just too large for us to bridge.

"Our departure has been quite amiable," he said. "We all kind of looked at one another and said, ‘It’s not working.’"

"Each of us had to learn new core competencies, and we found after the merger that we were not compatible and that it was easier for us and for them to continue to focus on what we do best."

Clients got letters from Wiss, telling them that after evaluating key areas such as compatibility of practice areas, both firms agreed it would be best for each "to focus and concentrate on markets and areas of expertise they serve best."

The firm, which has offices in Livingston and Woodbridge, will keep a presence in the county. Michael Lee will be partner in charge of Wiss’ Red Bank office on Half Mile Road.

Curchin & Co. was founded in Long Branch in 1974 by George Curchin, Stives and H. Alan Schneider. The partners moved the firm to Maple Avenue in Red Bank in the mid-1970s and to 125 Half Mile Road in 1992.

Fouratt, who had been with Curchin since graduating from college in 1978, said the merger with Wiss reflected an industry-wide trend.

"The trend in our industry has been that firms are growing very large or very small," he explained. "The need for capital and specialized services is driving mergers and acquisitions throughout the industry."

Wiss has 13 partners, Fouratt noted, and the merger gave Curchin, a mid-sized firm, a wider capital base and access to more services and more technical expertise.

"Wiss is a solid firm known for technical expertise. Their average client is larger than ours, and they service several publicly traded companies," said Fouratt.

"We have people that are experts in particular areas," said Fouratt, who focuses on audits of credit unions. Pfister handles individual tax clients and closely held businesses. Ferullo specializes in homeowners associations, while Stives handles finance and estate planning. The staff of 22 also includes certified business valuation specialists and a certified fraud examiner.

The longstanding Monmouth County firm has built a practice based on close relationships with clients, Fouratt said.

"We become more than the accountant; we become their adviser," explained the Shrewsbury resident. "That’s what builds long-term relationships. It’s been a culture here that we’ve all grown up with, that the founding partners instilled. We try to have that permeate the firm."

The unwinding of the merger has been amiable, and Curchin will retain the practice the firm had when the merger occurred, he said.

"I kept the clients I had," Fouratt added, "and there were a couple I left behind because they would be better served staying with Wiss. You always do what’s best for the client, and everything else will take care of itself."

Wiss has 13 partners in addition to a staff of 80 professionals who provide accounting, tax and consulting services to middle market companies.

The firm’s practice is focused on litigation support, corporate recovery, bankruptcy, turnaround management and the Securities and Exchange Commission.

"Technical expertise is one of our strengths," said Campo, who joined the firm straight out of college in 1983.

The Livingston-based firm was formed in 1983 through the consolidation of two firms, Wiss Pachman and Nechemie Goldberg.

"Not many firms handle the depth we do," he noted. "It’s one of our fortes."

According to Campo, the merger with Curchin gave Wiss entry into the Monmouth County market.

"Part of it was to get coverage throughout the state," he explained, "as a springboard for expansion into other areas of the state and into New York City."

Curchin represented about 16 percent of Wiss’ total revenue base when the firms combined, he said.

The firms have different marketplaces and will continue to cross-refer customers, he said.

"I think very highly of (Curchin)," Campo said. "It was an amicable decision on both parts."

Campo said unwinding the merger had some legal aspects but hasn’t been a difficult process because of the partners’ mutual respect for each other.

The decision on splitting staff and clients was uncomplicated, he said.

Since the firms’ practice areas were different, he said, undoing the merger allows Wiss "to concentrate on what we do well."

The firm will continue to pursue merger opportunities in Middlesex County, New York, Princeton and Philadelphia, he said, "with firms that complement our existing practice in medium-sized businesses."

Fouratt said it is business as usual at Curchin, where the four partners have a combined experience of over 100 years.

"We get along and like one another. We share the same philosophies and values," he noted. "We’re very heavily connected to the community, and we’re all excited about continuing to grow, serving our clients, and being involved in Monmouth County."