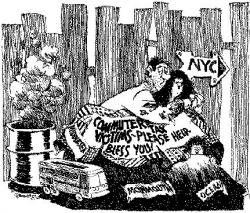 Facing a $7.4 billion budget deficit over the next two years, New York City Mayor Michael Bloomberg is looking outside the city to commuters in order to pay $1 billion in additional taxes to help bail the metropolis out of its fiscal troubles.

It’s nice that the mayor wants to lower the personal income tax burden on his residents while they face an 18 percent property tax increase next year.

The mayor went on to say at a Nov. 14 press conference that city residents "will actually see their tax burden reduced as a result of this reform."

In essence, Bloomberg is looking to make things better for his residents on the backs of those who have been paying their fair share over the years.

In addition, New Jersey commuters already pay a New York state income tax for the privilege of working in the city.

What’s next? A city borough tax? A city neighborhood tax?

When Bloomberg announced his proposal last month at a press conference, it was made with the knowledge that businesses have pulled up roots in the city and moved to New Jersey, Connecticut and the New York suburbs in the wake of the Sept. 11, 2001 terrorist attacks on the World Trade Center.

Despite the loss of business, Bloomberg said he is not worried that commuters will seek employment outside of the city to avoid the additional tax.

"And because three-quarters of corporate employees that work in New York live in New York and pay local income taxes, tax reform will minimize any long-term effect on city employment," Bloomberg said in a written statement.

How much does he think New Jersey commuters can take? The cost of commuting ranges from $250 to $450 or more per month while commuters pay state income, municipal and school taxes.

Now commuters are being used as pawns by the city’s mayor to ease his constituents’ tax burdens. Whatever happened to the concept of no taxation with representation? New Jersey commuters certainly won’t have any say with the proposed city tax.

Maybe Bloomberg should put his money where his mouth is and take $1 billion of his reported $3 billion personal fortune to fill the gap he wants the commuters to fill.