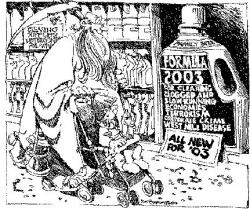 It will take all of the political support the Monmouth-Ocean County region can muster to advance a plan for passenger rail service through this area of New Jersey that continues to explode in population.

Published reports indicate that in the next decade it is expected that approximately 25 percent of New Jersey’s population will reside in Monmouth, Ocean and Middlesex counties.

A series of public hearings on NJ Transit’s plan to restore passenger rail service to central New Jersey went about as one could have anticipated in recent weeks.

In Middlesex County, where residents and officials have so far raised the most vocal objection to the Monmouth-Ocean-Middlesex (MOM) rail plan, most of the crowd was anti-train.

The hearing in Ocean County was a mixed bag, with some residents against the idea, and county officials squarely in the corner of getting the service re-established.

At the Monmouth County hearing, residents and officials of the area, which presently seems to bear the worst of Route 9 traffic, were mostly in favor of the MOM line.

The three routes being studied are:

• a passenger rail line from Lakehurst, Ocean County, through western Monmouth County, and into South Brunswick, Middlesex County, to connect with the Northeast Corridor Line. This plan has been dubbed the MOM line;

• a passenger rail line from Lakehurst, through western Monmouth County to Matawan, connecting to the North Jersey Coast Line;

• a passenger rail line from Lakehurst, through western Monmouth County to Red Bank, connecting to the North Jersey Coast Line.

The cost of constructing the MOM line from Lakehurst to South Brunswick has been estimated at about $400 million, according to published reports.

A regional mass transportation option that will take people to jobs and other destinations in New Jersey — and bring people from other areas to work and enjoy our region — is sorely needed.

Elected officials from Monmouth and Ocean counties have expressed their support for the MOM rail plan and must continue to do so. The Brick Township Council once again recently passed a resolution in favor of the MOM. Councilman Frederick Underwood, who also sits on Brick’s Planning Board, lauded the project as a prime example of "smart growth" and solid planning.

The Lakehurst to Red Bank and Lakehurst to Matawan routes don’t make sense because they eliminate travel through western Monmouth County and to points such as Trenton, Philadelphia and New Brunswick. There’s already a train station in Matawan for area residents who want to reach New York City.

State Sens. John Bennett and Joseph Kyrillos (both R-Monmouth) put it succinctly in a joint statement when they said, "Rush hour traffic congestion in the MOM area has become a serious quality of life issue. A MOM rail line would provide a viable option for New Jersey’s commuters. It would provide a long-term solution to a worsening problem. Stated simply, the area needs this service."

We couldn’t agree more and suggest that residents make their feelings known to NJ Transit during the ongoing public comment period that runs through Jan. 31.