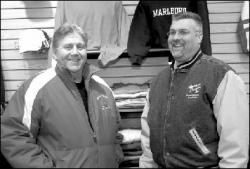 FARRAH MAFFAI Steve Barnett (l) and Todd Berman, owners of Apparel Zone on Main Street in Matawan, stand inside their store which screenprints T-shirts and does embroidery work for clients that include local sports teams, religious organizations and schools.

MATAWAN — The rush-hour commuter traffic on Route 79 south has been like free advertising for Steve Barnett’s Main Street business.

Commuters heading home from work who get stuck in traffic may find their eyes wandering to the lights set up at Apparel Zone, a clothing embroidery shop at 123 Main St.

Barnett said he uses the strategy of lighting his signs just after rush hour to help showcase his business.

"[At] the location here, the exposure is phenomenal," Barnett said.

"Main Street, at this point, is not a heavily trafficked area on foot," he said. "After five o’clock, [commuter] traffic at the Main Street area is incredible."

While the traffic may spread the word about Barnett’s business all the way to New York, pedestrian traffic in Matawan is slow, he said.

"I pick up a lot of business from people from New York knowing that we’re here," Barnett said.

Barnett’s business is embroidery and screen printing on T-shirts, sweatpants, sweatshirts, polo and golf shirts, hats, gym bags, pants, shorts, backpacks, and bath and beach towels. He deals mostly with schools, churches and temples, and sports teams, rather than people just walking in and making a single purchase.

He currently requires bulk orders, but he is in the process of moving most of his embroidery equipment from his Eatontown industrial facility, where shirts were made, so he can accommodate smaller orders from walk-in customers.

"If [Matawan officials] made changes and attracted more shoppers here, it would definitely attract more business," Barnett said. "I don’t need that for my business, that would be like icing on the cake. If there were more shoppers in the area, with our new embroidery business, we can cater to them."

Pedestrians could come in with a T-shirt order and have it filled in an hour, he said. Barnett, however, said he does not get this type of request since there are not many pedestrians walking through Main Street on a given day.

"It would add another dimension to our business," he said.

Barnett, of Aberdeen, and his partner Todd Berman, Manalapan, recently upgraded their store, changing it from what Barnett called a novelty shop to a department store.

The store’s main customer base is organizations that come back for a yearly bulk order, he said.

"With a school, the parent-teacher organization comes in and wants to run 400 or 500 shirts, and a lot of them take those and give them to kids and a lot use them for fund-raisers," he said.

"There were people from Matawan who were among those killed," Barnett said.

On top of printing the shirts for the authority, the store sold shirts to the public and donated the money to a fund set aside for survivors of Port Authority police officers who died in the attacks.

The store has a basement and separate floor for retail space totaling 6,000 square feet.

Four years ago, Apparel Zone took over the space formerly occupied by Harris Hardware. Apparel Zone took the opportunity to knock down its walls and expand the building two years ago when its neighbor, Bayshore Window, moved out.

"We moved and started to cater to businesses and organizations that wanted to advertise through apparel," Barnett said.

Apparel Zone first opened in Morganville over 10 years ago as a retail business. The business grew and the company that manufactured its merchandise became unreliable, Barnett said.

Due to customer dissatisfaction, the company picked up, moved to Matawan, and began to manufacture its own product, he said.

"We just saw a niche to be filled in decorated apparel," Barnett said.

Barnett and Berman have worked together for about 20 years, Barnett said. Prior to Apparel Zone, the two worked in Manhattan, N.Y., selling wholesale men’s sportswear to major department stores throughout the country.

There’s a large variation in the prices for Apparel Zone’s services, which begin at $3.75 and go up. All work is guaranteed.

"We only use brand names for the goods we deal in," Barnett said.