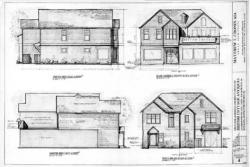 An artist’s rendering of the renovated and expanded British Cottage Antiques store. The plans call for the addition of living space above the expanded retail floor space which would be occupied by the owners.

Signs of a west-side renaissance continue to appear. Change is coming to the culturally and ethnically diverse sector of Red Bank that is unofficially delineated by Maple Avenue, but more accurately partitioned off from the borough’s downtown and east side by the NJ Transit railroad tracks.

Major projects planned for the west side that have gained the approval of the borough within the past year include a $3.5 million state-of-the-art theater on the Blais­dell Lumber site on Bridge Avenue, a decidedly upscale microbrewery and res­taurant which will occupy the vacant Anderson Ware­house near the railroad station and two major office complexes which will in­clude the world headquarters of home buil­der K. Hovnanian.

Perhaps more significant are projects that will bring an influx of new residents to the area, including a proposed 35-unit condominium/townhouse development at the corner of Monmouth and West streets that is controversial because it received variances to more than double the permitted density of development on the property.

Developers are already lined up to bid on a 2-acre parcel of the Blaisdell tract on Bridge Avenue which developers of the new theater complex will sell off for mixed use, expected to include a multi-unit residential development.

After a yearlong negotiation with the borough, construction will begin in late spring on a 16-unit townhouse development with units priced in the mid-$300,000 range on the site of the former Belle Haven estate on Locust Avenue, in the heart of the west side where additional high-density residential development is likely to take place.

There are many signs of a willingness to reinvest in the west side.

A few days prior, David Prown disclosed that he had signed a lease for showroom space for Prown’s Home Improve­ments at 135 Monmouth St.

Prown recently shuttered the 77-year-old Prown’s Has Everything retail store on Broad Street.

Within walking distance of the train station, Cranford-based Synergy Bank is proposing a branch on property running from Monmouth Street to Oakland Street that is now the site of an auto repair shop.

Within this context, the Red Bank Planning Board recently heard two applications for expansion of west side business properties.

The board approved an application to expand the site of an established west side antiques business into a mixed-use property by adding retail floor space and an apartment for the owners.

The board approved the application of Keith and Tricia Nelson, Rumson, to construct a two-story addition to the existing building currently housing British Cottage Antiques at 126 Shrewsbury Ave.

The appli­cation sought approval for variances including side-yard setback — a setback of 10 feet is required by ordinance while one of 7 feet is proposed in the application — and parking, with 10 spaces required and two provided.

Architect Matthew Cronin told the board that by expanding the commercial area and adding an upstairs apartment they will occupy, the Nelsons "are doing exactly what the intent of the [NB] zone is."

The Nelsons gained the space for the expansion by acquiring the adjacent private residence at 128 Shrewsbury Ave., which Cronin described as a "public nuisance" with numerous violations.

The structure was demolished to make way for the addition.

Tricia Nelson told the board she and her husband had paid up $25,000 in back taxes owed on the property, which Cronin said was in foreclosure.

The application calls for the addition to increase the display area for the antique pine furniture that the store specializes in to 1,996 square feet, and an 1,800-square-foot, two-bedroom apartment above.

The entrance of the store will be relocated to the front of the new addition, and a separate entrance will provide access to the apartment.

The design of the addition will repeat design elements of the building where the business has been located for 17 years, including the gabled roof and covered entrance, Cronin said.

"I commend the Nelsons for taking over the property. Just demolishing it improves the neighborhood," remarked Borough Ad­minis­trator Stanley Sickels, a board member.

According to Sickels, conditions in the demolished house were so onerous that code enforcement officials had to enter the premises wearing protective gear, including respiratory apparatus.

At the same hearing, the board put off a decision on a proposed expansion at Walt Street Pub, 180 Monmouth St.

The proposal would add a two-story, 650-square-foot addition onto the rear of the structure, but because public notice of the hearing failed to specify the eight variances being sought, the application had to be held. The matter was rescheduled for April 14.

Rumson architect Jack Cain told the board the proposal would expand the pub kitchen on the first floor and provide office and storage space upstairs.

According to Mustillo, the expanded kitchen will make the 35-seat pub a full-service restaurant able to capitalize on the spate of projects planned for the area around the Red Bank Train Station.

The kitchen expansion would add storage space and make it possible to serve an expanded menu.

A lifelong Red Bank resident, Mustillo noted that the pub has been a Monmouth Street fixture for 20 years and was the first in the area to offer live music.

But neighboring property owner Sylvia Harte told the board the expansion would have a negative impact on her properties, which include a building that houses a dry cleaner. Harte complained that the project would eliminate parking spaces at the rear of the property and block access by customers and tenants.