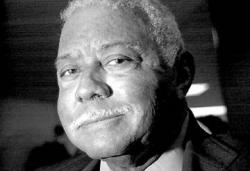 FARRAH MAFFAI Having worked for years as an electrical engineer at Fort Monmouth, Thomas E. Daniels now works on behalf of the African-American Heritage Association of Monmouth County.

Since the 1940s, the laboratories at Fort Monmouth have been the setting for major achievements by black scientists and engineers, including creating technology that ushered in the space age and the development of the Global Positioning System (GPS), a satellite navigation system with wide civilian and military applications.

"Fort Monmouth was known as the Black Brain Center of the U.S.," said Thomas E. Daniels, an electrical engineer at the U.S. Army installation for 35 years.

Daniels has written extensively about the achievements of black scientists and engineers who worked at Fort Monmouth beginning in the early 1940s and reaching a peak in the late 1970s and early 1980s.

A resident of Oakhurst, Daniels and his wife Maxine founded the African-American Heritage Association of Monmouth County, which recently presented an exhibit on black achievements in science, engineering and technology at the Student Center at Monmouth University in West Long Branch. The exhibit, which Daniels also has presented at area high schools, is part of an outreach designed to highlight the history of achievements by blacks, particularly in technical and scientific fields.

According to Daniels, who began his career at Fort Monmouth and retired in 1989 as assistant director for space and strategic systems at the Pentagon, while other research facilities were closed to blacks, the laboratories at Fort Monmouth — known as the center of electronic development for the Army — provided a place where black scientists and engineers could find jobs and advance in their careers.

The move into government jobs gained impetus from the desegregation of the military ordered by President Harry S. Truman in 1948, Daniels explained.

"The services have been kind of a model in terms of desegregation," he said. "As a result, they were able to benefit from the knowledge, experience and leadership of blacks."

Yet, Daniels said, outside the fort little is known about their contributions in fields where blacks traditionally had not worked, including positions as highly skilled technicians, engineers, mathematicians, physicists, computer specialists, scientists, logisticians, and managers.

‘They have invented many devices and equipment used by the Army," he wrote in an article for the Journal of the National Technical Association. "They have forged new frontiers in science. Their calculations have been used to send signals to the moon. Many have received patents for their scientific discoveries."

In addition, the outbreak of World War II, Daniels said, created opportunities for black women who secured positions as engineers, technicians and draftspersons in U.S. Army laboratories. Corrynne Godwin, of Middletown, was hired in 1942 and rose to become one of only two black female electronic engineers at Fort Monmouth to attain the level of senior engineer. Mary Tate, of Fair Haven, was hired at Fort Monmouth as a laboratory technician and rose to the position of computer specialist in the Communications Research and Development Command.

The period from 1979-82, according to Daniels, "witnessed the largest number ever of high-level black civilians and military" in positions at the fort, including three blacks at senior executive level (Daniels was one of those), and, on the military side, a major general, 10 full colonels who headed major technical operations, and 11 lieutenant colonels who were deputies of major technical units.

"We had so many black engineers in one place. You could go to other places and find one and two, but we had over 100," he noted.

Among the most notable achievements of blacks at Fort Monmouth was the work of the late Dr. Walter S. McAfee, a theoretical physicist, who did the mathematical calculations that made it possible for a team of Fort Monmouth scientists and engineers to bounce radar signals off the surface of the moon in 1946. His work as part of Project Diana at the Camp Evans Signal Laboratory, in Wall, ushered in the dawn of the Space Age, Daniels noted.

McAfee’s theoretical genius was recognized by the Army, which awarded him the prestigious Army Research and Development Achievement Award in 1961.

Other important scientists cited by Daniels include:

William Benjamin Gould III, who was among the first group of black electronic engineers at Fort Monmouth in 1940, worked on the early warning radar system, long-range guided missiles and the application of radio and radar for meteorological purposes.

John Carter, of Belmar, a senior physicist and former branch chief in the Electronics Devices and Technology Laboratory of the Electronics Research and Development Command, was recognized for his work on microwave ferrite devices with the Army’s second-highest award, the Meritorious Civilian Service Award. Carter was one of the most prolific black inventors at the fort, holding 26 patents, Daniels said.

John Perry, of Tinton Falls, was a chemist and team leader in the Electronics Technology and Devices Laboratory, specialized in development of batteries and power sources for communications electronics and laser equipment. Perry holds four patents on fuel cells.

Walter E. Johnson, of Fair Haven, was a project engineer, responsible for work on voice and data security equipment.

Bernard Smith, of Ocean, was a top physicist who was awarded 23 patents, including a patent for development of amplifier devices used in military radar, communications and electronic warfare jamming equipment.

Samuel Dixon, of Neptune, served as a senior electronics engineer at the Electronics Technology and Devices Laboratory, where he worked on microwave and millimeter wave devices and systems in the areas of radar, communications, electronic warfare and satellite systems. Dixon was awarded 20 patents.

Daniels was hired as a draftsman at Fort Monmouth in 1953 and progressed rapidly through a series of positions with the Electronic Warfare Laboratory, the Avionics Laboratory and Navigation Control Systems. During his career, he rose to the level of senior executive service, the highest level for civilian managers. In 1981, he became deputy laboratory director for combat surveillance, and in 1985 transferred to the Pentagon where he served as assistant director for space technology until his retirement three years later.

"In the early days, nobody would give me a project worth more than $25,000 to manage," he said, adding that he progressed to positions in which he managed multimillion-dollar programs.