Skip to content
Mary Gatta tackles issue as director at Rutgers U. Center for Women
By gloria stravelli
Staff Writer 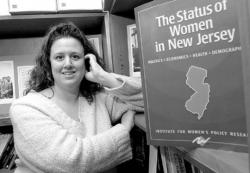 VERONICAYANKOWSKI Mary Gatta’s own experience in low-wage jobs has provided insight for her research at Rutgers University’s Center for Women and Work.

Summer jobs during high school and college provided Dr. Mary Gatta with more than a source of income. The low-wage jobs she held, like waitress and sales clerk, gave her unique insight into issues of women and work that are the focus of her professional life.

"I was a working woman in college. I worked as a waitress, a ticket taker, in retail and in other service sector jobs," explained the director of research and analysis at the Center for Women and Work (CWW) at Rutgers University, New Brunswick.

The center’s research and public education programs are focused on the economic and intellectual advancement of women and to challenging the status quo in the organizations that educate, train and employ women.

"Waitresses, sales clerks — they’re working for low wages, little to no benefits, and not much room for advancement,"’ noted the Long Branch resident. "Many are single moms. At the same time, I was studying feminist theory and public policy. I found there’s a real disconnect."

What Gatta learned was that waitresses deal with a lot of sexual harassment from customers and coworkers while earning only $2.12 an hour plus tips.

That’s less than men earn for comparable work, according to the Rutgers Databank, which was developed by the CWW in conjunction with the Institute for Women’s Leadership.

Despite the fact that women make up 50 percent of the workforce in the service sector, data shows they do not earn what men do for the same work.

The theme for the second annual Women’s Day Program was "Women in a Post 9/11 World." Topics ranged from "Women’s Emotional Well-Being" to "Understanding Long-Term Care and Insurance."

At the Center for Women and Work, Gatta’s areas of expertise include women’s work in the service sector, gender earnings inequality and sex segregation studies.

According to Gatta, 28, occupational sex segregation continues to be a major issue in the workforce, which is 47 percent female — a percentage that continues to increase.

"A great deal of occupations are still predominantly seen as women’s work," she explained. "For example, nursing is still 93 percent female, and this has real policy implications."

The current shortage of nurses is exacerbated by the fact "that 50 percent of the potential labor force is locked out because nursing is considered a traditionally female occupation," she said.

Another example is predominately male high-tech jobs, she said.

"Women make up less than 10 percent of the highest level IT [information technology] positions," she noted, "and research shows we are facing a shortage of qualified workers in that field. Again, we are missing 90 percent of the population because we are not training young women for these jobs."

Another CWW focus is nontraditional jobs for women.

Gatta is working with the state AFL-CIO on a program to increase the number of women in the building trades, a sector where women currently make up only 3-5 percent of the workforce.

The reason? Union jobs — from carpenters to parkway workers — offer good salaries and benefits that will give women the opportunity to become self-sufficient, she explained.

"We’re trying to put together resources so women know about this option," she said. "Many don’t think of the building trades as a career."

Gatta also is a staff member of the Council on Gender Parity in Labor, a joint initiative of the state Employment and Training Commission and the CWW, for which her focus is the role of gender equity in different occupational fields.

The council assesses the effectiveness of state programs designed to provide gender equity in labor, education and training, recommends and reviews current and proposed legislation and regulations, and educates the public on issues and developments in gender equity.

Last month, Gatta moderated "Economic Realities of Being a Woman," the first in a series of roundtable discussions on women’s issues sponsored by the council and the McGreevey administration held at Douglass College.

Gatta told roundtable participants that 99 percent of all U.S. women will work for pay during their lifetimes. Among Latino women, she said, 1 percent earn more than $75,000 a year, while 75 percent earn less than $25,000 per year.

In addition, she told the meeting, half of all women who work in traditionally female fields don’t have pensions.

"Women heads of households with children have the highest probability of living in poverty," she said. "The poverty level for a family of four is $18,000, and women are one-third more likely than men to be among the working poor."

The way to improve this dismal picture, she said, is to increase the skills and education levels of working-poor women, and Gatta is in charge of a pilot project for the CWW that will provide online skills training to 100 single, poor working mothers.

The project, known as "Women in the 21st Century Workforce," is funded by a $500,000 grant from the N.J. Department of Labor Women’s Bureau.

Women eligible to participate in the five-county program that includes Monmouth and Middlesex counties must be working in the state, meet income requirements and have at least one dependent child 17 years or younger.

About 100 women are enrolled in the program, which, according to Gatta, could become a national model.

Women enrolled in the program receive a computer for use at home, Internet access, and interactive, online instructional courses for a year. Courses include Microsoft Office, Basic Skills, Life Skills and Team Building.

"The goal of the program is to help build skills," Gatta said. "The program clearly gives women access to something they wouldn’t have had before. It’s giving them skills training, which is essential in this economy. A high school diploma is not enough. Unless we offer programs like this, we will continue to see both high schoolgrads and nongrads without real economic opportunities, and there will continue to be working poor."

In addition to change on an individual level, Gatta said the center’s research affects change when shared with "a broad audience of people who can make a difference."

"For example, the Gender Council reports are shared with the [governor’s] administration and different state agencies, and that helps to move the agenda for women forward and makes for positive change. It’s not just research happening in a vacuum; it’s an active role, and it brings attention to those issues."

An important component of the CWW’s work is debunking myths about poverty, Gatta said.

"There are so many misconceptions about poverty," she said. "There are an incredible number of men and women who are the working poor in New Jersey and in the U.S. It’s hard for people to get their minds around the fact that you can be working full time and be in poverty. There are a lot of hard-working women and men who can’t get ahead because of issues like child care, transportation, education and skills training. We need to find ways to address these issues."