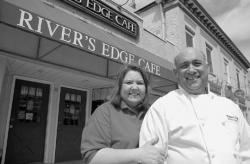 CHRIS KELLY Robert Guido and his wife, Christine, are relocating their business, the River’s Edge Cafe, to Broad Street in Red Bank. The move will make more space available to accommodate the growing number of patrons.

"We were at the point, especially on Sunday mornings, when we had so many regulars that people would come in and there’d be no place to wait. They had to stand there, and they were frustrated," said the proprietor of the popular eatery, which has a devoted following for its casual American menu, particularly its homestyle breakfasts.

"Also, I lost a lot of opportunities to have private parties because I didn’t have the space."

While Guido knew it was time to expand, he didn’t anticipate moving to two separate locations, which is the scenario that has developed.

If the move went according to plan this week, patrons of River’s Edge Café could have eaten breakfast at the West Front Street eatery Thursday morning and later in the day strolled a short distance south for dinner at the café’s new Broad Street location.

That’s what proprietor/chief omelet maker Guido had in mind when he planned the same-day move of his restaurant from 38 W. Front St. — within view of the Navesink — to 35 Broad St., the former home of Mulberry Street Ristorante at Mamma Lucia’s Restaurant.

When summer kicks off, The Deck at River’s Edge will begin serving lunch and dinner, Thursday-Sunday, in the 85-seat eatery perched dockside overlooking the Navesink.

Guido didn’t set out to double his venues; things just worked out that way. His original plan was to add the outdoor dining spot at the marina formerly occupied by The Navesink Café as a seasonal location.

"Everything happened at once," he explained. "I was talking to Chan [Irwin, owner of Irwin Marine] about taking over the café at the marina when I saw an ad for a restaurant for sale on Broad Street.

"I wanted to be on Broad for a long time. I realized I was reaching the point when I needed more room. The cafe was limited by the small space it occupied."

At 1,100 square feet, River’s Edge Café had room to seat only 50 diners. Even though an efficient staff managed to maximize the space, serving up to 350 patrons for breakfast, Guido said customers would often be forced to wait for seating, but the small space provided no room for waiting.

Guido purchased the Broad Street restaurant business, negotiated a 10-year lease and more than doubled his restaurant’s seating while gaining space for waiting customers and private parties. In its new location River’s Edge Café will be open seven days a week for breakfast, lunch and dinner.

At the same time as he is upgrading the kitchen and hiring staff for the new Broad Street location, Guido is installing a new kitchen at The Deck at River’s Edge, which he has leased for a year.

"He’ll do great there," said John Sharp, who operated the Navesink Cafe since it was added to the marina in 1991.

Sharp said not having a year-round restaurant to offset the effects of inclement weather made it difficult for the outdoor cafe to succeed financially — a problem Guido won’t have, he noted.

"We were at the whim of the weather, and it kicked our butt," said Sharp, who will focus on festivals and off-premises catering in the future.

Channing Irwin, owner of Irwin Marine, said he and Sharp parted ways at the end of last summer, adding The Deck at River’s Edge will give the marina-based eatery a much-needed new format.

The dockside eatery will be open for lunch and dinner Thursday through Sunday, Memorial Day through Labor Day and will serve a casual menu focused on salads and sandwiches.

A retired teacher, Guido decided to satisfy a lifelong passion for cooking by opening his own restaurant in Red Bank in 1990.

"I had a couple of places — I was always dabbling in it. It was something I always wanted — to have my own place," explained the Monmouth College grad.

The spot he found on West Front Street had been vacant, and he credits his wife, Christine, for giving River’s Edge a welcoming persona.

"My wife was responsible for making it homey," said Guido of the handmade tablecloths in homey prints like calico and tartan and the Tiffany-style light fix­tures that characterized the cafe.

Guido spelled out the philosophy that made River’s Edge a thriving business.

"Make it as if it’s your home and your mother is in the kitchen cooking," advised Guido, whose mother, Mildred, recently retired from River’s Edge after working there for years.

"Everything is homemade. I make sure everything is always fresh and serv­ings are copious. We crack our own eggs, cook our own potatoes for home fries. I cook as I go, I don’t precook. It’s more work, but people appreciate your taking care, and that’s very important to me.

"Part of me wanted to stay there, but what would I say to customers? ‘You can’t come in because there’s no room?’ "

But stepping up is a challenge, he acknowledged.

"It’s a tough spot to be in," he said. "It will be more work. I’m raising the bar a lot. But I have an experienced staff. You need the people behind you, and most have worked for me for five, six and eight years."

With 125 seats at the cafe’s new quarters on Broad, Guido said he could up the number of people served at breakfast to 500 and accommodate pri­vate parties of up to 75 people.

Guido said he will keep the River’s Edge menu and prices the same and hope the increased seating capacity will offset the higher overhead.

He has expanded the cafe’s classic American dinner menu, while keeping entrées in the $15-$25 range and his wife is again tweaking the décor, adding garden elements like lattice to the restaurant interior.

In its new location, the café will be open seven days a week for breakfast, lunch and dinner. Guido is selling the business at his former location so that site is likely to remain a restaurant, he said.

According to Guido, his greatest business asset is one that transports well.

"My philosophy has always been to give people consistent quality," he said. "You will get the best I can give. I’m not going to cut corners.

"The best comment I can get is if someone says, ‘The food was as good as always,’ " he noted.

"It’s been a love relationship with the food and with the people. I have real loyal, steady people.

"I’m not worried. I know my break­fast and lunch people will come. I’m try­ing to tap into a diverse market," he added.

"It won’t be easy; it’s a big step, but I know I can make it. We’re going to make it as comfortable over here as it was there."