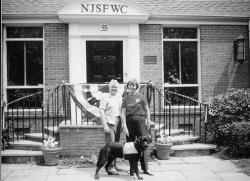 Ann Quinn, president, and Anne Redlus, third vice president of the N.J. State Federation of Women’s Clubs, show off Ripley, one of the puppies that the Federation supports as part of a statewide project to help the Canine Companions for Independence organization.

According to a capsule history of the international General Federation of Women’s Clubs (GFWC), the motto is "Unity in Diversity." The aptness of the motto is evident in the diverse interests of members who have implemented a broad range of programs and projects tailored to meet the needs of their communities.

In New Jersey, there is diversity in age groups, too. Besides the Woman’s Clubs there are 55 Junior Clubs for women between ages 18-40, and 13 Juniorette Clubs for 12- to 18-year-olds.

"But women can join either the Junior or the Woman’s Club. We try to connect each person with their interest," said Ann Quinn, president of the New Jersey State Federation of Women’s Clubs.

"Each club is a grass-roots organization that works for the community. Like the Molly Pitcher Club that raised money for the overlook [at Monmouth State Battlefield] or the Freehold Township Woman’s Club that raises money for Operation Smile. Operation Smile is an ongoing project [providing reconstructive surgery to children overseas] that many Woman’s Clubs like to support," Quinn said.

In addition, almost every club takes on a family in need. Over the years, members have donated 1,431,404 hours and $4,689,090 in cash and in-kind donations to their communities, she explained.

According to GFWC literature, the women are from all walks of life. They include teachers, business owners, professionals, corporate executives, retirees, homemakers and mothers. They are joined by their concern for their community, but each member brings a different perspective that enhances the organization, while the club structure broadens and strengthens an individual’s skills.

The organization supports club presidents and chairwomen by offering training at the district and state level and provides them with resource materials to assist them in their volunteer positions.

These clubs are not single-issue organizations, Quinn said. Members work on a variety of projects that include the arts, preserving natural resources, promoting education, assisting the homeless and people with disabilities, helping international health organizations, and encouraging safety programs.

The interests of the members determine the projects chosen by each club. The NJSFWC and GFWC provide resource information and suggestions for implementation of these projects. Since so many individual club projects assist local needs, donating items to shelters, scholarships for high school seniors or women returning to work, delivering meals to the homebound, providing items for nursing homes, donating books to libraries, participating in story hours, supporting food drives, collecting items for the homeless, etc.), the club’s efforts are often not as visible to members of the community and other potential volunteers as they should be, Quinn said.

Project diversity is evident when you look at some of the clubs and what they are doing:

The Woman’s Club of Colts Neck recently completed a cleanup of the Laird Road Recreational Area. Members have adopted this section of town and participate in a cleanup three times a year. Money raised is returned to the community. The club will also be sponsoring an apple pie contest at the Colts Neck Fair. The club meets during the day on the second Thursday. It also has an active Evening Department. For more information call (732) 946-8118.

The Freehold Township Woman’s Club collects food items on a continual basis for local food pantries. With the help of other members of community, the club also collects S&H Greenpoints from Freehold Foodtown. The manager converts these donated points into certificates, which are also given to the pantries. The club meets in the evening on the first Monday. For more information call (732) 462-7398.

The Molly Pitcher Woman’s Club of Freehold Township recently held the opening of the Molly Pitcher spring overlook at Monmouth Battlefield State Park, Manalapan, which became a reality by working with members of the community. Members are still seeking help to improve the pathway and install a large display marker and bench. Members were also present for the recent re-enactment of the Battle of Monmouth. The club meets in the morning on the third Tuesday. For more information contact (732) 462-8894.