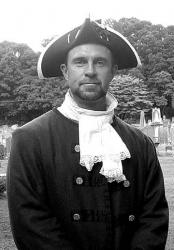 Charlie Zahm of Narbeth, Pa., performed a rich repertoire of historical music, ranging from the ballads of the Scottish Highlands to the American Civil War era. The capacity crowd was treated to old standards and lesser-known tunes.

The musical event was sponsored by the Friends of the Olde Yellow Meeting House and the Olde First Baptist Church.

Organizer Bill Wentzien, Upper Freehold, a pastor and Civil War re-enactor, noted that the Olde Yellow Meeting House, dating from the 1730s, was the mother church of all Baptist churches in the area.

Zahm remarked that he enjoyed singing his songs in historic structures, since the topics that are dealt with in the Revolutionary-era and Civil War-era songs were discussed in those very places, by the people for whom they were contemporary issues.

Zahm recited the Declaration of Independence, and then sang a ballad written by Thomas Paine, author of Common Sense.

The song, "The Goddess of Liberty," was written in response to the events of Sept. 11, 1777, when British Gen. William Howe brought his troops up the Chesapeake and engaged Washington’s army at Brandywine. The defeat of the Continental Army led to the British occupation of Philadelphia.

Songs were a great vehicle, Zahm explained, especially in an era when much of the population was not able to read.

He also sang a song commemorating the victory of John Paul Jones and his ship the Bonhomme Richard over the British warship Serapis, particularly noteworthy since Jones’ ship was on fire, but he still managed to get the British to surrender.

The audience joined in on favorites such as "The Bonnie Banks o’ Loch Lomond," the Shaker hymn "The Lord of the Dance," and "Marching Through Georgia."

Zahm noted the many re-enactors in the audience, and the resurgence of patriotism in America, as an answer to this old soldier’s question.

The evening closed with "The Battle Hymn of the Republic."