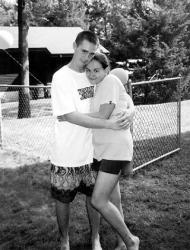 Derrick Palmer and Erin Ervin, who met in Kuwait while they were serving with U.S. military forces, celebrate their engagement at Ervin’s Jackson home. Both soldiers saw duty in Iraq.

Life is a search for the things that fulfill it. Earlier this year, while serving in the Middle East, Jackson resident Erin Ervin, 19, found two of those sought-after items — a man she could love and a career they both could share in service to their country.

On a visit home three weeks ago, Mayor Michael Kafton presented Pfc. Ervin, a food specialist attached to the Sixth Army Infantry Unit, with a plaque in recognition of the young woman’s dedication to her country, while her fiancé, Pfc. Derrick Palmer, 19, of Chicago, a mechanic with the army’s Sixth Transportation Battalion, looked on.

Erin is the daughter of Joseph and Gillian Ervin.

"Thank you for the service you bring to this community," Kafton said after the brief ceremony which was held in Ervin’s backyard.

Jackson Mayor Michael Kafton presented Ervin with a plaque of appreciation to thank her for her service in Operation Iraqi Freedom.

Ervin’s photo appears with those of other Jackson residents on the township’s Wall of Pride at the entrance to the municipal building. It is a tribute to those residents who are currently serving in the military.

After the mayor’s presentation of the plaque, with family and friends in attendance, Palmer got down on one knee and formally asked Ervin for her hand in marriage, holding out a box with an engagement ring in it. Ervin said yes and the two kissed.

"I want you to know I perform weddings," Kafton said in jest, as the couple stayed locked in embrace.

According to the couple, they plan to marry in December 2005 — a time much further off in the future than the entire length of their whirlwind courtship, which began in February while the two were stationed in Kuwait.

"A mutual friend introduced us," Palmer said. "I figured [at the time that] she needed someone extra for a card game, but instead she introduced me to Erin."

Palmer said the friend knew he had just ended his last relationship before Christ-mas. He said he had been unprepared to begin another until he met Ervin.

"I walked in and she had her back to me, but then she turned around. I thought, ‘Oh, my gosh, you’re beautiful!’ " he said.

Ervin said she was just as unprepared for their immediate chemistry.

"When we first met, I was just looking for a cool person to talk with, and it just grew," she said.

The two became fast friends and went out on a date the following evening.

One week later, it became apparent to both that there was more to their relationship than friendship.

"Erin worked up at the dining facility where she supervised the native Kuwatis working for the U.S. [military]," said Palmer, who had come to visit her there. "I was supposed to be back at midnight, but instead we played cards and talked until dawn."

When asked if she could cook since she worked in food service, Ervin laughed and confessed she did not, but said that she would like to learn.

"Derrick said as long as I learn to cook spaghetti, I’ll do fine," she said.

That was all he needed, said Palmer.

"As long as I have my spaghetti and steak, I’m good," he said.

Palmer said both he and Ervin were considering a career in the military.

The two will go to Chicago, then to Fort Eustis in Newport News, Va. After that, they may find themselves stationed once more in Iraq.

"They’re telling us we may go to Baghdad" after that," said Ervin.

The thought that they may be placed in harm’s way did not trouble the couple.

"As long as I get more money," said Palmer, referring to the military’s hazard pay of $125 a month.

For Ervin, however, the motivating fac­tor in accepting another tour of duty in a war-torn country was even more basic.