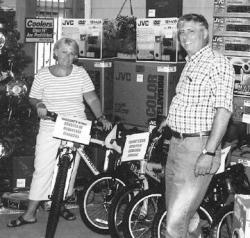 PLUMSTED — New Egypt Speedway was recently home not only to race cars, but also to more than 2,000 toys.

A special Toys for Tots fund-raiser was held July 12 with a Christmas in July theme, complete with holiday decorations and Santa Claus, according to speedway spokeswoman Buffy Swanson.

The mission of the U.S. Marine Corps Reserve Toys for Tots program is to collect new, unwrapped toys and distribute those toys as Christmas gifts to needy children in the community in which the campaign is conducted, according to the Toys for Tots Internet Web site. The program is traditionally held in October, November and December, although New Egypt Speed-way likes to put its own summer stamp on the collection.

According to the Web site, the primary goal of Toys for Tots is to deliver, through a new toy at Christmas, a message of hope to needy youngsters that will motivate them to grow into responsible, productive, patriotic citizens and community leaders.

The New Egypt Speedway effort also got a boost from Plumsted resident Gene Stravinsky who, for the fourth straight year, donated items such as TVs, VCRs, bicycles, DVDs, air conditioners, CD players and stereo systems to the Night at the Races.

Stravinsky is the owner of Advantage Financial Mortgage Bankers.

"It was great," Stravinsky said of the toy drive. "I wanted to do a promotion, and I decided this would be a good cause."

Stravinsky donated at least $15,000 in money and gifts to the cause.

Racing fans who brought toys to donate to the Toys for Tots drive received a raffle ticket for each toy they donated and had a chance to win a prize.

Representatives of the Marines were on hand for the track’s special event.

"They made a presentation and helped out by taking the toys after the night was over," Swanson said.

"The Marines were thrilled by the outcome of the event," Swanson said.

Staff Sgt. Jack Santelli is the coordinator of Toys for Tots in central New Jersey and was pleased with the show of support.

"It went very well," Santelli said. "It was one of the better years we’ve had. A lot of people were motivated, and it was widely publicized."

The Marines will hold onto the toys that were collected at the speedway until the Christmas season and then make sure they wind up under the trees of children who might not otherwise receive gifts, Santelli said.

Toys for Tots has been a tradition since 1947, and it has grown every year. In 2002, the Toys for Tots campaign in central New Jersey collected 65,000 toys that went to more than 20,000 needy children.

"We get a lot of support from the Marine Corps League, the Veterans of Foreign Wars, the American Legion and the Navy League," Santelli said. "We rely heavily on civilian volunteers. They assist us a lot. Our main focus is to help needy children to have a decent Christmas."