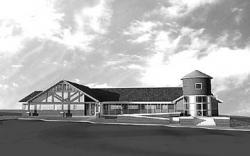 Therefore, plans for a new municipal building to house more offices were presented at the Township Committee meeting last week.

At the meeting, architect Thomas Kocubinski said the new building, which would house the construction office, would be behind the current municipal building on Route 539. A portion of the new facility would be built on what is now the parking lot.

Kocubinski explained that the design would create a campus plan, keeping the buildings close together.

"It enhances the architecture and planning of the community," he said. "It looks like a community of buildings."

Under the plan, there will be a courtyard with concrete pavers. Space for future expansion of the new building has been factored into the plans.

The entire building will be 6,500 square feet, including a 2,000-square-foot storage area in the basement for municipal records, which state law mandates must be kept.

Kocubinski said the building was designed to reflect the township’s agricultural past, with a silo effect at one end and beams at the other. The one-story building will have walls 6 inches thick and will be energy efficient. The architect said that it will be constructed with as many recyclable materials as possible.

The project is expected to be put out to bid by October. Preliminary cost estimates are in the $1.2 million to $1.3 million range.

Republican Township Committee candidate Sal Diecidue asked where the trucks for the Public Works Department, also situated behind the current building, would go.

Township Engineer Glenn Gerken replied that there would still be a direct drive to the DPW building and recycling area, but the width would be increased to make it two lanes.

Former Mayor Robert Abrams commented that there seemed to be "no plan to slow down growth so there would be no future expansion. I was against [the current municipal] building 30 years ago.

"I’m not against this but would like to see the justification. We have increased school taxes and increased services," he said.

Abrams noted that the building was described as reflecting Upper Freehold’s agricultural past.

"By the time the next generation comes around, we’ll have no agriculture, just development," Abrams said.

He added, "The public has had no input. We just had renovations in this building. How are we going to afford to live here?"

Resident Mark Kovitz agreed, saying he would also like to see justification for a new building for the construction department.

Mayor William Miscoski said it was possible that a lot of contributions would be coming in from the construction office, to minimize the amount paid by residents.

Committeeman David Horsnall said, "It’s frustrating to some folks, but there is a definite need to create more space for this township to carry on its business. One of the busiest departments is the construction department. To serve the community that’s growing, right or wrong, we need those kinds of spaces to deal with all this business going on in the township.

"These are issues we are faced with. We need more space for finance, taxes, the assessor’s office. As the municipality grows, it needs more space," he added.

Kovitz said it would have been nice to take some of the money for construction and use it for open space.

Committeeman John Mele said, "We’re still having difficulties with [the current] building. Heating and air conditioning is still a nightmare. We have four or five people working in a small space — this building is very, very tight. We need to look into the future."

Mele also said most people were not happy with the architecture of the present building.

When asked if additions to the current building were considered, Kocubinski said that it had been looked into, but due to the road system and proximity to Route 539, the best solution was a new building.

"Putting more money into this building is throwing good money after bad," she said.

Abrams disagreed with Mele’s assessment of the current building’s architecture.

"The shed design of this building is the oldest design in this country," he said.

He also asked the Township Committee to wait until January, when new members will join, before putting the contract out to bid.

Mele said that, in his opinion, the Township Committee was always going to be changing, so waiting on business for that reason was insufficient.

Resident Sue Kozel asked if organic landscaping could be used.

However, resident Roger Bullock disagreed, saying it would be very expensive to maintain such plants and would require a full-time groundskeeper.