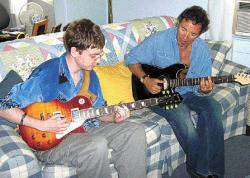 Michael Antrim, 17, enjoys a jam session with Bruce Springsteen on June 29. Springsteen paid a visit to Michael’s Red Bank home to sign a portrait of himself that Michael had painted. Photo below shows Michael, then 15, with the award-winning portrait “Hometown Hero.”

He’s "The Boss," he makes house calls, and now Michael Antrim has one heck of a story to tell his kids someday.

Freehold native Bruce Springsteen, one of the world’s greatest rock and roll icons, recently paid Michael, 17, a visit at home. Honest. It was Springsteen’s way of making good on a promise he made more than a year ago.

The story began in December 2002 when Michael entered "Hometown Hero," his portrait of Springsteen, in Freehold artist Elaine Smith’s annual art contest at the Freehold Public Library in Freehold Borough. Michael’s work earned him the Best in Show award.

At the time, Michael, who suffers from a serious form of Crohn’s disease, was participating in a Make-A-Wish Foundation program while receiving treatment in New Brunswick. His wish was to have Springsteen autograph "Hometown Hero." 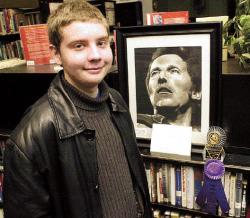 Knowing her student’s wish, Smith took it upon herself to see what she could do and in early 2003 she dropped a note to Springsteen telling him about Michael.

Her letter produced an almost immediate response from Spring-steen, who sent a note congratulating Michael and apologizing for not being able to attend the art show. He also said he would love to come and sign the portrait at another time.

On June 29 a knock at Michael’s front door in Red Bank revealed that Springsteen is a man of his word.

The rest is a story and a day that Michael Antrim will never forget.

His mom, Kathleen, calls the experience a "once-in-a-lifetime occurrence." She referred to Springsteen as "a sweet guy, a regular guy, just like you and me."

She said it was a great experience to have Springsteen come to her home and take the time to visit with her son, as well as to honor Michael’s request to autograph the portrait.

Oh, and one more thing.

Michael had another wish — to play a tune or two with his favorite musician.

Springsteen honored that wish as well. Sitting on a sofa in the living room, the two musicians jammed on guitar a bit. Michael got his wish and his mom had a chance to hear the duo play her favorite Springsteen song, "The Promised Land."

Michael said the 90-minute visit was unforgettable. He said that after introductions and handshakes, Spring-steen sat with the family and "just talked for a good while."

The conversation ranged from Spring-steen asking questions about Michael’s music and his artwork to recounting memories of getting his own band started and what it was like when he was growing up. Michael said Springsteen shared stories of his early days playing "gigs" in clubs with his band "up and down Route 9 in the Freehold area."

Springsteen then picked up Michael’s acoustic guitar and began to play. The teenager described it all in a manner that could not contain his enthusiasm.

"Then he played my electric guitar," Michael said. "He said he liked my guitars. He said they were very cool.

"He told me he thought I knew what I was doing on the guitar," and that is a compliment that from this day forward will be hard to beat, according to the young man.

After the music and the conversation, Springsteen sat down at the dining room table and, as promised, signed Michael’s artwork.

Springsteen signed "Keep the faith" on Michael’s original "Hometown Hero" portrait and "To Elaine. We did it!" on a print of the portrait that Michael had made for Smith.

"That was for Miss Elaine. She was such a big part of this whole experience," Michael said.

Michael has been taking lessons with Smith at the Around the Corner Art Center in Freehold for six years. This fall he will be a senior at the Visual and Performing Arts Academy at Red Bank Regional High School, Little Silver, where he is a member of the National Honor Society.

Michael said Springsteen told him he "loved my artwork." He said that remark and Springsteen’s earlier comment about his guitar-playing ability will stay with him forever.

"Compliments like that? I mean, these are from Bruce Springsteen!" the teen said.

When it was time for Springsteen to leave, "he kissed my mom on the cheek. She’s such a big Bruce fan. Then we shook hands and he gave me a hug and he headed out," Michael said.