LINDA DENICOLA This carved wood plaque marks a new nature trail in Shrewsbury, dedicated to Esther Hymer. At right, Hymer as a young woman. Below, she celebrates her 100th birthday at the United Nations in New York. SHREWSBURY — This morning Shrewsbury officials and residents dedicated a nature trail in honor of a remarkable woman who settled in the borough in 1941 and whose life’s work improved the lot of women worldwide.

The Esther W. Hymer Nature Preserve is a quarter-mile-long nature trail of wood chips on top of gravel located on Williamsburg Drive in the Azalea Farms development. The dedication took place at the western entrance, between house numbers 237 and 241 Williamsburg Drive. 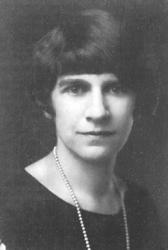 Esther Hymer The walking trail will be marked by a large wooden plague with a smaller plaque below stating that no pets or bicycling are permitted.

Hermann Allen, who was chairman of the Environmental Commission at the time the project was developed, had known Hymer since 1991 when he joined the commission and she was already a member.

According to Allen, the nature trail project was initiated by the Environmental and Shade Tree commissions shortly after Hymer died in 2001. 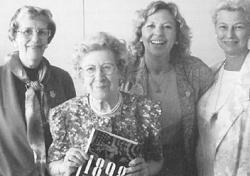 He said Hymer was not only concerned about the plight of women worldwide, she was also concerned about preserving the natural beauty of her own property and the community.

Hymer lived on 11 acres in a gracious old Victorian on Sycamore Avenue. According to Allen, she said on a number of occasions that contractor/developers would call her about once a week and offer to purchase her property.

They would remind her that she wasn’t going to live forever. She would reply, “Don’t count on it.”

The house, on the west side of the road just east of Route 35, is in the process of being renovated, but, said Allen, the developer is going to build six additional houses on the property.

Councilman Donald Burden said of Hymer, “She was such an instrumental force in the women’s rights movement, not only in Shrewsbury and Monmouth County, but around the globe. Her many activities toward heightening and elevating the contributions of women remains a lasting legacy.”

“The borough missed doing anything on her 100th birthday, so when she was 103, we decided to recognize her contributions to the community. We asked her what she would like to have. She said, ‘A new lap top computer.’ ”

Added Allen, “She always liked to keep up with what was going on in the world.”

In 1990, Hymer won the Women as Agents of Change Award from the New Jersey Division of the American Association of University Women (AAUW). At the time she said the award was the most important she had ever received.

She had received a number of awards by that time in her life, including the World Badge of Honor from the International Federation of Business and Professional Women, an organization for the advancement of women in 46 countries, and the Peace Messenger Certificate in recognition of a significant contribution to the program and objectives of the International Year of Peace — 1987.

After 1990, she won many more awards, among them the Monmouth County Woman of the Year, 1996 and the New Jersey Women of the Achievement award from the state Federation of Women’s Clubs in 1998.

Hymer has been called “A legend in her time,” and a book was written about her accomplishments.

The book, “Esther W. Hymer, A Bus to 42nd Street,” was written by two women and published in 1999 by BPW International, London, England. BPW International is the acronym for the International Federation of Business and Professional Women, a development partner with the United Nations.

The book includes an official United Nations photograph of Hymer as a young woman with a short bob and intelligent dark eyes. The one long strand of pearls she is wearing seems to be the only adornment.

The book is a history of the United Nations and the evolution of the Commission on the Status of Women, how nongovernmental organizations (NGO) came to be and movements toward peace.

It tells the story of Hymer’s role and work with both the United Nations and BPW. As the book states, it illustrates the commitment and determination of one woman and her belief that every person should have the opportunity to fully develop their potential and use it for building a more just and peaceful world.

There is a picture of her at her 100th birthday celebration at the United Nations. She is holding a piece of paper with her birth date in bold letters, 1898. She doesn’t look 100 year’s old. She could pass for a woman 30 year’s younger.

According to the introduction, on the day of the celebration, Hymer wrote a message for BPW members around the world.

First she extolled the existence of the U.N., an organization that is even more beleaguered now than it was in 1998.

“It is time for action by all members to make known more widely the constructive work of the United Nations and its related bodies, especially those that are improving the position of women. What is done by people now may help determine whether succeeding generations will be saved from the scourge of war,” she said.

(Hymer died in April, before 9/11 and the war in Afghanistan and Iraq.)

Kofi A. Annan, secretary-general of the United Nations, sent her a congratulatory letter.

“Your untiring efforts influenced almost all the resolutions of the General Assembly and its subsidiary bodies, which affect the status of women. Your devotion and determination encouraged important strides in the achievement of gender equality.”

Hymer was an alumna of the University of Wisconsin, Madison. Her alumni association obituary described her as an early peace activist and feminist. While a student in 1920, she marched for ratification of the Nineteenth Amendment, which gave women the right to vote.

She became an aide to Margaret Hickey, who represented the National Federation of Business and Professional Women’s Organizations at the 1945 conference that established the United Nations.

Later, Hymer served as the federation’s director of international relations and as a non governmental representative to the U.N. for six decades.

Hymer is one of the women profiled in the book, “Past and Promise: Lives of New Jersey Women,” created by the Women’s Project of New Jersey Inc.

Although Hymer has died and her home is being renovated and property developed, her legacy as an advocate for women and peace still stands. The nature trail is a reminder of what one determined person, from a small town in New Jersey, can accomplish.