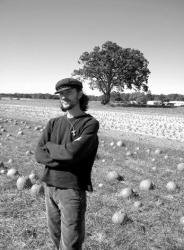 Steve Rogers of Red Bank plans to travel the state, stopping to record the unique stories of people he encounters. To paraphrase a former governor, New Jersey and the automobile are “perfect together.” Whether it’s the view from the turnpike at 55 mph, a midnight ride through a deserted urban landscape or a cruise through the Pine Barrens on a perfect fall day, many people form their impressions of New Jersey while riding in a car.

So it’s appropriate that “Driving Jersey,” a new documentary by Steve Rogers, of Red Bank, currently in preproduction, will capture the state’s spirit through the faces and voices of the people the filmmaker encounters during a series of road trips.

Rogers plans to travel the state collecting the oral histories that comprise the film with his lifelong friend, Ryan Bott, and fellow filmmaker, Cindy Fand. Rogers will write and direct “Driving Jersey,” Fand will handle the technical aspects, and Bott will compose and record original songs for the soundtrack, which will also include music from other New Jersey singers and bands.

“I’m not looking for stereotypes. To say that New Jersey is a ‘Sopranos state’ doesn’t work for me.” – Steve Rogers Although “Driving Jersey” will focus on the contemporary culture of the state as seen through life stories of a wide array of New Jerseyans, the idea grew out of Rogers’ experience creating three historical documentaries about Long Beach Island.

“We were all over the Jersey Coast, meeting people who just wanted to start telling us their stories. That’s what happens when you are making a film, people want to tell you about themselves.”

Rogers credits his relocation to Red Bank after 10 years of living inManhattan and watching the varied New Jersey landscape on his morning commute as inspirations for the film.

“My original intention was to make a strictly historical documentary about my home state,” he explained, “but after talking to countless Jerseyans about their perspectives on and of history, I quickly switched my focus to the contemporary culture of the state.”

He selected his co-filmmakers for their interview skills.

“Cindy and Ryan are the kind of people that people open up to. Sometimes people are reluctant to comment on film. These are people who will help me pry the truth out of people,” he said.

Although the trio originally planned to travel the state randomly collecting oral histories, they are now asking for recommendations and volunteers from the general public. They have received over 60 responses so far.

“We’re interested in having the people of the state shape what this film is all about right from the very beginning,” Rogers said. “We’ve been soliciting stories and ideas of interest from Jerseyans throughout our preproduction through classified ads and on the Web through craigslist.com.”

Rogers described their outreach process as “trolling and fishing for people,” and they intend to cast a wide net.

“No one will be considered too absurd or too anything to be included. Unique, outspoken characters are welcome and encouraged,” he explained in an e-mail. “We’re looking for people who typify their place and time, but also folks who are parts of bygone eras, from the ‘large and in charge’ to the nearly extinct and everything in between.”

The trio will be working with two digital cameras and will travel with a fourth person to handle sound. Each of the trio will participant in the interview process.

They are still developing their production schedule, which originally called for only one week on the road. They are now considering a week in September, another in December and a third the following June.

Their original route has been modified in order to meet the people who have responded, but they still plan to visit all of New Jersey’s major cities as well as places like the Meadowlands and the Pine Barrens.

“I’m not looking to get stereotypes. To say that New Jersey is a ‘Sopranos state’ doesn’t work for me,” Rogers said. “Are there those types in New Jersey? Yes. Is it typical? No.

“We’re simply going to show all people and try and treat it as if we are making a film about each person. We want to get to the heart of what each person is and what they are all about,” he added.

Among the local people already on Rogers’ list are Charles Parisa, head chef at the Savannah Restaurant in Red Bank who bikes everywhere, and Pinky, Red Bank’s own impressionist painter.

In addition to volunteers and people they encounter on the road, the filmmakers have also approached a number of New Jersey experts whom Rogers describes as “long shots,” including New Yorker and Vogue contributor Robert Sullivan, who wrote a book about the Meadowlands, John McPhee and Bruce Springsteen.

Rogers, who was born in Weehawken and later moved to Long Beach Island, has been interested in filmmaking since high school. After receiving a degree in literature from Stockton State College in 1993, he moved to New York City, where he researched and wrote “After Me, The Deluge,” a film about the life of writer Jack Kerouac, and wrote for the television show “Northern Exposure.” He currently works for the National Television Academy as the senior national correspondent and manager of the Emmy Awards.

Ryan Bott grew up in Ocean Acres, a small residential neighborhood in Manahawkin. A graduate of the Institute of Audio Research in New York, Bott is a professional sound engineer and a singer/songwriter who will compose music for the film during the road trips.

Born in Connecticut, Cindy Fand holds a bachelor of fine arts from the School of Visual Arts in Manhattan and has worked on reality TV shows for ABC, NBC and VH1.

Tom Smith, a Manahawkin bed-and-breakfast owner and producer of singer/songwriter shows, will serve as executive producer. He previously produced several plays Rogers directed in the mid to late 1990s.

“Our plan is to go out for the first week, edit it down and approach funders,” Rogers said.

According to Rogers, NJN has indicated an interest in running the film when it is completed. Other distribution plans for “Driving Jersey” include the festival circuit and selling copies in bookstores.

The group plans to create a Web site where they will post photos taken during the trips and longer versions of individual interviews.

For Rogers, this film may be only the first in a series. Like his idol Jack Kerouac, he dreams of pursuing his art through a life on the road.

“I dream of one day, once this film is complete, to have the ability to do this as my own life’s work,” he said. “I’d like to travel around as a journeyman and record contemporary American voices for all 50 states.”

To make suggestions or to volunteer to be in the film, send an e-mail to