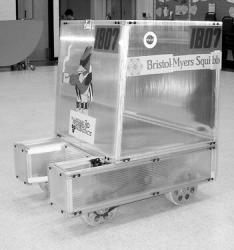 Allentown High School’s Redbird Robotics team will take this robot to compete in The Brunswick Eruption 2006 in North Brunswick on Saturday. ALLENTOWN – Its lean, mean machine is ready for another rumble on Nov. 4.

Allentown High School’s Redbird Robotics will face off against other local robotics teams in a postseason competition in North Brunswick on Nov. 4. The all-day event is free, and the public is encouraged to go out and support all the teams.

Redbird Robotics began its second year in the FIRST (For Inspiration and Recognition of Science and Technology) Robotics program in September. FIRST is a multinational nonprofit organization that aims to transform culture by making science, math, engineering and technology exciting through the development of robots for competitions held all around the nation.

Last year was a banner rookie year for Redbird Robotics, consisting of 17 core students who led the team to the FIRST championship competition in Atlanta, according to Wicks.

“This year, we are already on our way toward a great season,” Wicks said.

The team gave the public a chance to drive its robot in a booth at the Allentown Harvest Festival, which took place earlier this October. The team will now head to North Brunswick Township High School to take part in a postseason event called The Brunswick Eruption 2006.

“Our first competition of the year is actually a postseason event using last year’s robot, with our most current upgrades,” Wicks said. “Students spent time this summer retrofitting the robot with a proper collection system that automatically picks up balls to deposit them in the hopper.”

The postseason competition will take place Nov. 4 from 8 a.m. to 5 p.m. at the high school on Raider Road in North Brunswick.

According to Lynn McLean, a team parent for North Brunswick’s Raider Robotix Team, The Brunswick Eruption is an exciting robotics competition sponsored each year by Raider Robotix. Now in its fifth year, the exciting, fast-moving competition features teams from over 20 high schools in New Jersey, New York, Pennsylvania and Connecticut, she said.

The Redbird team will not only be competing against Raider Robotix, which placed second in the FIRST national championships last year, but it will also face local teams from West Windsor and Hightstown.

The hard-hitting competition will feature a total of 27 teams, each with a 120-pound robot that will battle for offensive and defensive dominance on a 54-by-26-foot playing field.

Wicks said, “People should expect to see many local teams not only competing, but showing gracious professionalism toward each other – even helping other teams succeed. It is a most interesting kind of competition.”

The event will also feature games and giveaways from noon to 2 p.m.

The Redbird team will start its new competitive season in January, when it will learn what type of games the robots will have to compete in for the 2007 competition.

“After our kickoff event on January 6, we will be running against the clock to create our next design in a six-week time frame,” Wicks said.

The team will need to have the new robot ready for its first competition at the Sovereign Bank Arena in Trenton on March 1-3.

Last year, funding for Redbird Robotics came from donations and grant money. Participating companies included Bristol-Myers Squibb, the National Aeronautics and Space Administration (NASA), TAH Industries Inc. in Robbinsville, and Chase Manhattan, which was represented by Robert Cheff, a former member of the Upper Freehold Regional Board of Education.

This year, the team hopes to gain funding from some of the same sources and from new donations and grants. The team will partner with the Upper Freehold Regional Education Foundation to provide prospective sponsors with a tax-deductible means of supporting the team.