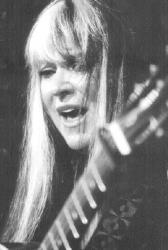 Popular ’70s singer Melanie will perform at Monmouth University’s Pollak Theatre, West Long Branch, on Saturday. In the early 1970s, a young woman who went solely by the name of Melanie emerged seemingly from out of nowhere with a series of stylistically diverse hit singles that ranged from the soulful “Lay Down (Candles in the Rain),” inspired by her experience as a performer at the legendary Woodstock music festival in 1969, and teasingly playful “Brand New Key,” to the nostalgic country-honk of “Look What They’ve Done to My Song.”

Within a musical landscape that included such contemporaries as Joni Mitchell and Carole King, she laid the foundation for a long-playing career that has made the Queens, N.Y.-born Melanie Safka something of an internationally acclaimed ambassador of peace, love and cross-cultural understanding.

Throughout those Woodstock-era years of broad-based stardom, Melanie and her husband-manager, producer Peter Schekyryk, chose to make their home within the quiet precincts of Lincroft, far removed from the world of national TV appearances and major concert tours that claimed the souls of many a less-grounded pop star.

While she and her partner of 39 years live in Nashville these days, Melanie returns to Monmouth County on Saturday for a concert appearance at Monmouth University’s Pollak Theatre that’s being billed as a “homecoming” for a performer who’s become a real citizen of the world in recent years.

“New Jersey always wanted to claim me,” observed the singer, who last returned to the area upon her mother’s passing three years ago. “But really, when we first moved [to Long Branch] from the city, it was then very provincial; they hadn’t seen the likes of me.”

Although closely identified with the culture of the Woodstock era, the self-proclaimed “outcast and oddball” has always rejected the “hippie” pigeonhole in favor of an outlook she describes as “more of a beatnik.”

“I was a New York street rat, into new trends,” the artist maintains of her often frustrating teen years on the suburban Shorescape. “In my third year of high school, I ran away from home and made it all the way to California, something that was a lot easier to do back then.”

Young Melanie did make her way back east in time to graduate from Long Branch High School and, between hours spent at the original West End location of the Inkwell coffee house, would land her first singing gig at local landmark The Quay in Sea Bright.

Recalling her evenings at what was to be her only local Shore venue, Melanie explained, “I was supposed to do 20 minutes on, 20 minutes off, but I was so shy at the prospect of just having to hang around and talk to people that I wound up singing for four hours straight.”

Within just a few years, however, Melanie Safka’s world was a much bigger and much different place. Marriage to musician and record producer Schekyryk in 1968 presaged a recording contract and chart-topping hits in France and the Netherlands, even before her history-making stop at Woodstock.

Having the courage and conviction to follow The Who in their explosive prime at the 1970 “Isle of Wight Festival” cemented her fanatical following in the UK, and ecstatically received appearances on TV’s “The Ed Sullivan Show” and “The Dick Cavett Show” served to pave the way for her tenure at the top of the American charts.

The next time Melanie sang on a Shore-area stage, it was as the headliner at Asbury Park’s Convention Hall.

The ensuing years were a time of firsts and foremosts for Melanie, including being the first female artist to release records through her own label imprint.

By the latter part of the 1970s – a time when disco ruled the billboards, punk got the press, and the Boss proudly stood as the standard-bearer of the Jersey Shore sound (“He had friends here; I didn’t”), Melanie had curtailed her high-profile musical activities in favor of raising a family.

Today, the Schekyryks can boast of three musically inclined offspring as well as two grandchildren. Daughters Jeordie and Leilah Safka have appeared with their mom in between their solo pursuits, while son Beau-Jared Schekyryk is an accomplished guitarist who now accompanies his mother on all of her global touring jaunts.

Despite her dialing it down a notch in her young mom years, Melanie never turned her back on her career, and she continues to compose and release new music between performances for international audiences that often number in the tens of thousands.

In 2006 alone, she and Beau-Jared have taken their two-person concert act to cities in the United States, Holland, Belgium, Germany and Austria as well as South Korea, a nation that has long been a passionate Melanie fan base.

“The first show I did was at the Olympic stadium in Seoul; they were really big shows,” she explains of her most recent visit to a country where at least one popular native performer has built a career on emulating her look and style.

So big is she in South Korea, in fact, that her very early song “The Saddest Thing” has been a Top 10 record there for a downright surreal 30 years.

The dramatic high point of the Korean tour occurred when Melanie was invited to perform a special “Concert for Peace” at Imjingak, a memorial site just a few miles from the demilitarized zone between the two Koreas.

The show came just a matter of days after North Korea announced that it had crashed the nuclear “club,” and has played a crucial role in the establishment of the “World Peace Train Tour,” for which the Schekyryks seek to enlist other musicians from all corners of the globe.

“This is not a left/right thing, it’s a survival thing,” explained the singer. “We all know what we hate; we need to focus on what we love.”

One of the songs featured prominently at Imjingak, “Motherhood of Love,” was inspired by the teachings of Amma, the Hindu spiritual leader noted for employing the hug as the basis of her ministry.

While asserting that the song does not promote a particular religion, Melanie has incorporated some of Amma’s teachings into her live performances, and speaks firsthand of a life-altering experience with the woman who’s been described as a “modern saint.”

The singer promises a genuine cross section of material at Saturday’s intimately scaled appearance – songs that range from vintage favorites like “Beautiful People” (and, yes, “Brand New Key”) to newer compositions, possibly including the post-Katrina meditation “Ordinary Rain,” and on into “things I haven’t even recorded yet.”

“I have a definite spiritual bent … it pulls people in, along with people who just love ‘Brand New Key,’ ” the artist explained. “I believe in music; I basically think that the world can be changed with a song.”