Skip to content
Veteran, twp. resident for over 50 years has road named in his honor
BY JENNIFER AMATO Staff Writer 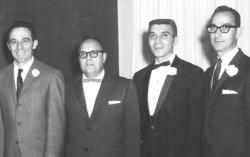 Fifty-year resident Rocco Adamo and his family will be honored with the naming of Adamo Way off Old Georges Road as part of the Township Council’s street-naming program, which focuses on new streets in town being named after veterans of all foreign wars.

“I was really honored to have our name perpetuated in a town this size, which will be 40,000 [residents] soon,” Rocco said.

Rocco joined the Air Force on May 20, 1942, at age 18. The former automobile parts salesman was airlifted the same day and attended the Air Corps School of Cryptography. He became a cryptographic technician, responsible for coding and decoding secret, confidential and restricted military messages. 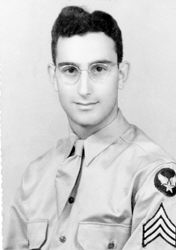 “I wanted to go to the Air Force. I would have ended up in the infantry; even though I wore glasses, it made no difference then. They had 10 million soldiers go in – they said, ‘If you can’t see, just shoot.’ I just didn’t want to be in the Army or Navy,” he said.

He served during World War II in Algeria-France, Morocco, Tunisia, Naples-Foggia, Rome-Arno, northern France, southern France, the Rhineland, the northern Apennines and central Europe. He recalled one instance when he and his outfit had to live underground. They couldn’t get through Naples but had to get to Germany, so the military brought planes in. Flares and bombers were constantly dropped on the site.

Rocco was awarded a Bronze Star for crossing the Rhine into Germany, working for 40 hours without sleep to try and get all the aircraft in the air to bomb Germany. He also received a Good Conduct Medal, a Distinguished Unit Badge with four Oak Leaf Clusters and a European African Middle Eastern Service Medal.

Rocco’s brothers were enlisted in the military as well. Dominick was a corporal engineer in the Army Signal Corps; he fought in the thick of the Battle of the Bulge. Tony was a medical technician with the 64th Field Hospital in Baccarat. Frank, who was an Air Force corporal mechanic, stayed behind in Arizona.

The only time Rocco served with his brothers was in the spring of 1945 when he and his fellow soldiers were driving through Leone, France. When they pulled over another Jeep, it happened to be Tony’s outfit, so the two men spent their two-day leave together before going across the Rhine. They toured parts of Europe and at that time found out that Tony was going to be a father.

“I just felt it was one of the best experiences an individual could have,” the 83-year-old Rocco said of his military service. “Maybe not during wartime, but if you want to serve, it’s a great experience. … I wouldn’t want to do it again, but … I would say, if you have to join the service, then look for a job that’s good. Learn something, but know how to take orders. They say go, you go. They say sleep, you sleep.”

After being honorably discharged on Oct. 1, 1945, Rocco went back to Barnesboro for three months. After their releases, Tony went to Pittsburgh, Dominick stayed in Pennsylvania to work in the coal mines, and their two sisters, Mary and Sara, moved to Connecticut. Mary is now 87 years old.

Rocco lived in Franklin Township for a few years but then followed Frank, who moved out of Pennsylvania to avoid working in the coal mines, to North Brunswick. He met his wife, Connie, in August 1947 and got married the following June, and they have now been married for 58 years.

They have lived in town for 56 years, with Rocco first helping his uncle in Trenton in the garment industry and then becoming a management analyst for the military. Retired at age 55, he worked for the township police department and part time as a travel agent. He officially retired in 2000 but remains involved with the Office of Emergency Management board, the Memorial Day and Columbus Day parades, the North Brunswick Housing Corp. and Meals on Wheels. He joined the first aid and rescue squad, the Knights of Columbus at St. Mary of Mount Virgin Church in New Brunswick, American Legion Post 459 and Veterans of Foreign Wars Post 2319. He was previously on the library board for 15 years, and served as a member of the senior center’s Pioneers organization, the Carnevale Italiano committee and the Local Assistance board.

He is also the recipient of the Heritage Day Award in 1993 and the Mary Slye-Ann Marie Chandlee Community Service Award in 2002. He was also the grand marshal of the Memorial Day Parade in 1981. He was inspired by his brother Dom, who told him that wherever you live, you should be a volunteer.

“I think living in a town for a long time, this is how you learn about all the people that live with you and how you feel about people you work with … and this town gave me a lot. This town owes me nothing; I owe the town a lot. That’s why I’m into volunteerism,” he said. “I think I’ve met the requirements of a normal citizen and I think I have fulfilled my purpose in life in being in the town and serving this town.”