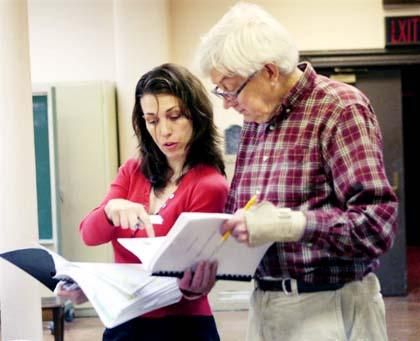 Conposer Peter WSestergaard: ‘(Lewis Carroll’s characters are) ‘so highly individual and such fun. Something a little bizarre is actu

A cast of seven will play 38 roles. Twelve English handbells, along with a few whistles, tambourines, drums and other percussion paraphernalia, will make up the orchestra. A projection system will create the special effects neededfor the vastly changing size of the set.
What may sound like a backyard production by young people is actually an ambitious professional staging of an adult opera by composer Peter Westergaard, based on a children’s classic.
The world premiere of “Alice in Wonderland” is set for 8 p.m. Thursday in Richardson Auditorium of Alexander Hall at Princeton University. At 8 p.m. Tuesday and Wednesday, June 3 and 4, the opera will be performed at the Peter Jay Sharp Theater in Symphony Space, Broadway at 95th Street in New York City.
Reviewer Anthony Tommasini of The New York Times described a semi-staged reading of the first half of the opera in 2006 as “dramatically fantastical and musically modernistic.”
The work is the sixth opera by Mr. Westergaard, who transferred to emeritus status in July 2001 after 33 years on the Princeton University music faculty.
“I’ve been thinking about ‘Alice in Wonderland’ for four decades,” said the composer, who also will direct the production. “Most of my opera ideas cook for a long time. Then when I feel ready, it’s the next one.”
The opera is true to the Lewis Carroll tale. It follows a girl named Alice as she falls down a rabbit hole into an astonishing world populated by strange creatures.
Soprano Jennifer Winn will play the role of Alice. The rest of the characters — ranging from the hookah-smoking Caterpillar to the violent Queen of Hearts — will be performed by six singers: countertenor Marshall Coid; mezzo-soprano Abigail Fischer; soprano Karen Jolicoeur; bass Eric Jordan; tenor David Kellett, and soprano Amaia Urtiaga. Five of the singers sang the first half in New York two years ago, and Mr. Kellett is a veteran of Mr. Westergaard’s operas — this is his third. Their costumes have been designed by Sarah Cubbage for rapid changes.
The singers also will make up the orchestra, playing a set of 19th-century English handbells loaned by collector Scott Parry of West Windsor, a member of Princeton’s Class of 1954, as well as a variety of other percussion instruments andcontraptions for sound effects. Conducting will be Michael Pratt, conductor of the Princeton University Orchestra and a longtime collaborator with Mr. Westergaard.
“The bells are the stabilizing factor — they provide pitch anchors for the singers,” Mr. Westergaard said. “There are some percussion instruments that might help — tuned rototoms, for example — but you can’t really get a pitch from a drum like you can from a bell. So the bells represented a way of solving the problem, but also as I began to work with them I realized what a marvelous sound they produce and how beautifully they blend with voices. They don’t stick out as being something separate — they really become part of the vocal ensemble.”
To deal with the issue of Alice as she grows larger and smaller during the course of the story, scenic designer Alison Carver and lighting designer Christopher Gorzelnik are using a rear projection system to project the scenery at different sizes. If Alice is larger than normal, the table next to her will be projected smaller than normal. Video also will be used in the opera at one point.
Mr. Westergaard, who earned his master’s degree from Princeton in 1956, said he was particularly drawn to the idea of writing an opera based on “Alice” because of its characters.
“They’re so highly individual and such fun,” he said. “Something a little bizarre is actually better for opera, which is already bizarre because people sing instead of speak. You create an alternate reality, and to do that you don’t have to make things the same as they are in real life — you just have to make them consistent.
“Carroll played ‘what-if’ games with children,” Mr. Westergaard added. “That works very well for opera because that’s what you do. You say, ‘O.K., in this world, these are the rules of time and space.’ Having a logician like Carroll running your dream is more or less ideal. It’s sort of made to order. Once you take that leap of faith, it cries out for a musical equivalent.”
The performances of “Alice in Wonderland” are being presented by Princeton’s Department of Music and the Center for Contemporary Opera in New York.
Tickets for each performance are $45 for general admission or $10 for students. They are available for the Princeton performance online through University Ticketing at www.princeton.edu/utickets/ or by calling (609) 258-5000. They are available for the New York performance online at www.symphonyspace.org or by calling (212) 864-5400.
— Office of Communications, Princeton University