Members of the New Jersey League of Community Bankers were treated to a presentation on the benefits and future of the radio market by Peter Smyth, president and chief executive officer of Greater Media Inc. 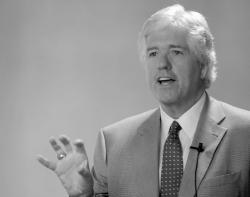 Peter Smyth, president and CEO of Greater Media Inc., speaks at the annual marketing conference of the N.J. League of Community Bankers, on June 10 at Forsgate Country Club, Monroe. Smyth joined Greater Media in 1986 as general manager of WMJX-FM, Boston, and was appointed vice president/general manager the following year. InMarch 2002, he was named president and chief executive officer of the company, which is headquartered in Braintree, Mass.

The New Jersey League of Community Bankers, celebrating its 100th year, is a business league promoting the growth, development and common interests of those in the community-banking business in New Jersey.

“I want to draw some parallels between what I see as the great community involvement of your industry that really dovetails well with our own,” Smyth told those assembled.

Greater Media’s first radio station in New Jersey,WCTC-AM, was based in New Brunswick and is the organization’s oldest property, Smyth said. WCTC was one of the stations that introduced GreaterMedia to the radio business and provided an understanding that being community based is a key to success.

Keeping that mind-set of community, the company has since expanded to include 23 radio stations in Boston; Charlotte,N.C.; Detroit; New Jersey; and Philadelphia. Greater Media also publishes 13 community newspapers and is involved in the telecommunications tower business.

Radio is a successfulmediumbecause it is personal, innovative and versatile, Smyth explained. Receiving a license to broadcast is a privilege, Smyth said, and leads to the belief that stations must give back to the communities they serve.

There are nearly 1.2 billion radios in the United States, giving stations the opportunity to connect to and inform their listeners, Smyth explained.

At the moment, there is a transition from an analog signal to HD digital. HD radio eliminates the static, hiss, pop and fades commonly associated with analog signals. AM-band broadcasts will sound like an FM station, and FM-band broadcasts will have a digital CD sound quality. The wireless data feature allows text information on songs to be seen directly on the receiver display screen.

This digital broadcasting is a renaissance for the radio community, Smyth described. The digital format will offer more to the listener, including niche formats, which would help provide a more customized advertising campaign for various businesses.

To inform the community bankers why they should choose radio as an option for their marketing strategies, Smyth said, “The key is that radio creates an incredible brand awareness.”

Radio ads make an emotional connection with the listener, establishing the locations, the offerings and other details of the business. The CEO shared two success stories including one of Magyar Bank’s opening of a new branch in Branchburg. Working with Greater Media radio station Magic 98.3, the bank was able to create a customized publicity program.

When asked about satellite radio, Smyth expressed his opinion that he believes there is room for the service, but it should stay as a national service.

Smyth also expressed his belief that no one should have to pay more for access to media. Using the example of the high costs related to cable television providers, Smyth said, “I think there is a point where you have to say enough is enough.”

With consolidation of stations onto a satellite band, Smyth said he felt the sense of community would be lost.

“Our company is heavily invested in every syndicate that we operate in, inmaking sure we leave that community a little better than we found it,” Smyth said.