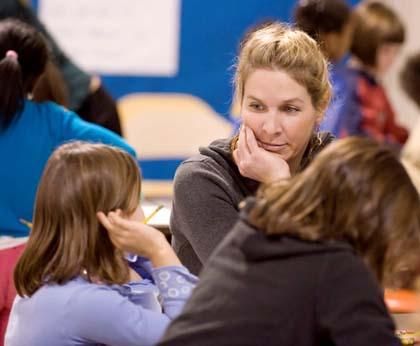 Special to The Packet
Artist and Princeton native Beth Livingston visited Littlebrook Elementary School last week to explore with first-grade students what art reveals about the artist. Her appearance served as a prelude to the seventh annual exhibition of original art and fine crafts by disabled artists known as ArtFirst!, sponsored by the Auxiliary of University Medical Center at Princeton.
Ms. Livingston, a disabled artist and one of the exhibitors, asked the children to write down three things their classmates might not know about them on the back of a piece of drawing paper. She then asked them to draw a picture on the other side revealing the information, and invited them, if they desired, to share their creations with the whole group.
The most dramatic audience reaction came as the children showed their drawings. One of the girls declared: “I take ballet at the YMCA,” and held up a realistic portrait of herself in her ballet costume. While the other children drew themselves as small in relation to the page, the ballerina drew herself as covering most of the paper.
“Oh, wow,” the children said, looking at their classmate’s self-portrait.
Ms. Livingston capitalized on the moment to illustrate that the clue found in this artwork was the size of the self-portrait, and it demonstrated the confidence that the girl has in herself and her dancing. “When you create a picture, it says something about you,” she told the children.
Ms. Livingston also shared and showed slides of her own art, from bethlivingstonart.com. Her online exhibit includes paintings, sketches, photographs and some three-dimensional pieces incorporating objects with interesting shapes in appealing new ways.
“I like to use things that other people might throw away,” she said.
For example, a harrow — a tool for tilling the soil, with sharp curved blades on a wheel — was decorated with doll’s eyes and an antique camera in a piece called “Les Yeux,” French for “Eyes.”
Whimsical, academic, unconventional and charming are the clues in Ms. Livingston’s work that reveal much about the artist. What people would not know from her art is that she is disabled. She became paralyzed from the waist down from a car accident that happened shortly after she graduated from Parsons School of Design.
Ms. Livingston’s pieces will be among those on display and offered for sale at ArtFirst!
“Twenty-five percent of the proceeds will go to the Auxiliary of University Medical Center at Princeton for the establishment of a Trauma/Critical Care Room at the new hospital to be built in Plainsboro in 2011,” said Betsy Rosen, this year’s co-chair for ArtFirst!
“The main point of ArtFirst! is that we stress the art over the disability,” said Leslie Seybert, president of the Auxiliary of University Medical Center at Princeton, adding that the information about the artist’s disabilities will be listed in the exhibit catalogue, but the signage hanging with each piece will state only the artist’s name and title of the work.
“If you have a disability, it does not necessarily stand in your way,” said Amy Rabner, a member of the ArtFirst! Steering Committee, who was the link to Ms. Livingston’s art lesson at Littlebrook. Ms. Rabner’s daughter, Dara Rabner, is a first-grade teacher there.
For the ArtFirst! exhibition, the jurors considered 715 submissions and selected 40 three-dimensional pieces, including pottery, jewelry and sculpture, and 280 two-dimensional pieces, including drawings, paintings and photographs.
Photographer and Lawrence resident Leigha Cohen will be joining Ms. Livingston as a returning artist to ArtFirst! She creates beautiful photographs despite living with bipolar disorder and chronic pain stemming from a car accident and the illness fibromyalgia.
Ms. Cohen said that art restored the sense of identity and self-esteem that she lost when her disabilities made her too ill to work as an electrical engineer.
She manages to fit together enough pieces of time to pursue her art, which includes many richly detailed renditions of Lake Carnegie, the D&R Canal, and the Delaware River at sunset or in fog. More information is available at leighacohenphoto.com.
When she became disabled, Ms. Cohen said she had a choice.
“I could have said ‘Life has ended for me,’ but I chose to say ‘Here is a chance to further challenge myself,’” noting the art became a healing force in her life.
“I got some recognition as an artist, so I was not defined solely as a disabled person,” she said.
The preview party for ArtFirst! will take place on Saturday, May 2, at University Medical Center at Princeton, and the show will remain on view through June 12. To attend the preview party, go to www.princetonhcs.org, click on University Medical Center at Princeton, and then click on Auxiliary.