To express the power of “we,” the North Brunswick Abilities Council held its first Disabilities Awareness Day Sunday at the township high school. 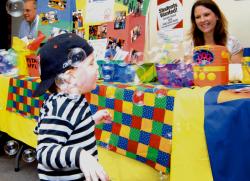 SCOTT FRIEDMAN Jason Henry, 2, has fun with a bubble machine while standing in front of a display for Jumpstart Kids Club. His mother, Sandra Henry, was one of the vendors at the first Disabilities Awareness Day, presented by the North Brunswick Abilities Council on Sunday. The event was designed as a social gathering for people and family members affected by developmental disabilities to meet the community, have fun and have access to resources beneficial to them. Organizers plan to hold the event annually.

“Since the death of my precious niece, a big part of my life is clarifying goals that are important to people with developmental disabilities. There are so many issues that seem at first to be barriers, but when a community gets together to promote awareness by holding a disabilities awareness day, it gives us all a better understanding why the Abilities Council is so important for the citizens of North Brunswick,” said Robin Turner, the chairwoman of the Abilities Council.

Turner’s niece, Danielle Gruskowski, 32, suffered from Rett syndrome, a neurological disorder that affects motor movements and the ability to communicate. She passed away on Nov. 4, 2002, after caretakers at her Edison group home failed to identify multiple symptoms as life threatening and did not call 911.

“Only by really walking in a disabled person’s shoes or sitting in their wheelchair and actually having to get something done is when you start to comprehend the magnitude of the challenges people with disabilities go through every day. For them, every day is disability day. But it’s their ability that will make your day,” Turner said.

“It’s a wonderful place for children with disabilities — there are mats, slides, a ball pit, manipulatives and toys, a place to stimulate their imaginations, a playhouse area, even a pirate ship,” she said.

Based on Mommy & Me or Daddy & Me classes, Henry said integrating children with and without disabilities work to the advantage of all involved.

Angela Guerriero of Tempo! Music Therapy uses music to help achieve therapeutic goals such as increased attention span or motor skill improvement or enhanced communication for children with or without challenges — and especially those affected by autism — by playing the piano, singing with a microphone or writing songs.

“Music is a universal language and is very motivational,” she said. “Kids are just attracted to music.”

The North Brunswick Buddy Ball program was also highlighted, bringing attention to the spring and fall soccer leagues that pair teenage volunteers with special needs residents for one hour every Saturday. Sponsored by the North Brunswick Soccer Club, the goal of the program is “to teach about soccer, but the main idea is to have fun,” according to Ned Geiger.

“This gives kids who many not otherwise have this opportunity to get out and run around, all at their own pace,” Geiger said, noting how it also provides parents a break to converse with other parents on the sidelines.

Walter Endler, of the North Brunswick Office of Emergency Management (OEM), was on hand to provide registration forms for anyone who has special needs, is on a respirator or dialysis machine, is bedridden, is critically ill, is visually or physically impaired or who is wheelchair bound.

The personal, medical and emergency contact information will be sent to the county OEM and disseminated to individual towns, so that police, fire and rescue squads know the condition of someone who may be impaired when they arrive on scene, especially in case an evacuation is necessary.

“This here is going to give us the correct information so we can help people with special needs,” Endler said.

Anyone interested in registering can visit the township at 710 Hermann Road.

Another device to aid first responders is a refrigerator magnet that was being distributed by members of the North Brunswick First Aid & Rescue Squad, which lists medical data and emergency contacts in case a person is unable to give or cannot remember information during an emergency.

On the advocacy front, Kathy Wigfield and Monique Dujue-Wilson were providing information about the need to keep the disabled out of institutions.

Frankie Macias has been at the New Lisbon Developmental Center since 1994, Wigfield said, although he was only supposed to be placed temporarily due to his affliction with Cornelia de Lange syndrome.

Wigfield said his condition is deteriorating, and she claims he has suffered physical, psychological and sexual abuse. There is a petition at www.FreeFrankie.com to ask Gov. Jon Corzine to help release Macias.

“Institutions are breeding grounds for abuse and neglect,” Wigfield said.

Dujue-Wilson, on the other hand, fought to have her 22-year-old son Khary back home. He had pancreatitis at age 15 and was hospitalized for a year in seven different places, but was told he had no supports at home and had to be institutionalized. She said she has been self-directing for the past five years.

“Now, he is productive and is thriving in life at home and in the community,” she said.

Another special aspect of the day was a proclamation given to the parents of Byron Goundrey, 18, a North Brunswick resident who passed away in April 2007 after suffering from spinal muscular atrophy. He graduated from North Brunswick Township High School and went on to study political science and Middle Eastern studies at Rutgers University, where he was part of the Rutgers University Emerging Leaders Institute. He was also named the American Legion Jersey Boys State governor in 2005.

“Our son was very lucky, very fortunate, to have grown up in this town, which accepted him from the time he was a baby,” his mother Kathy said.

Several people and organizations volunteered their time or made donations to make the awareness day possible. Anne Brady led the Girl Scouts in sensitivity training, and the girls made sandwiches, made posters and used signed language during the Pledge of Allegiance.

Members of the township police and fire departments were also on hand.

In the near future, Turner said the Abilities Council will work toward various initiatives, and also has an ongoing project to collect donations of medical equipment to those in need.

For more information about the Disabilities Awareness Day contributors or the Abilities Council in general, contact AbilitiesCouncil@ northbrunswickonline. com.