Walk into the Hartshorne Gallery at the Monmouth County Historical Association’s museum on Court Street and you will encounter one of the county’s most beloved icons, boldly inviting visitors to view the exhibit of various sculptures and sketches from local artist Donald De Lue. 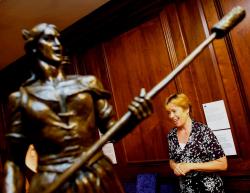 PHOTSO BY ERIC SUCAR staff Museum Curator Bernadette Rogoff gives a tour of the Donald De Lue exhibit, which includes a sculpture of Molly Pitcher (foreground), in the Monmouth County Historical Association Museum’s Hartshorne Gallery on July 22. Bronze medals sculpted by the world-renowned sculptor who lived in Leonardo are included in the exhibit. From 1966 to 1981 De Lue sculpted several small models of Molly Pitcher, mistress of the battlefields right here in Monmouth County, and had toyed with the notion of using a larger embodiment of her as the sentry to the historic site.

“I love the feeling of power you get when you first walk in and there she is,” said Bernadette Rogoff, curator of museum collections for MCHA. “The first impression is that this is a woman you don’t want to mess with.” 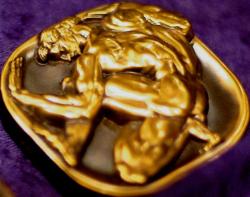 Powerful and muscular human figures seem to dominate De Lue’s work and are clearly embodied in “Molly Pitcher,” on loan to the MCHA’s exhibit from the Child’s Gallery in Boston.

Her hair hangs loosely down her back and her broad shoulders eventually taper down to a strong torso, flanked by chiseled arms, holding the rammer staff she wielded while loading revolutionaries’ guns during the Battle of Monmouth.

“Most of his pieces are very powerful,” Rogoff said. “There is nothing tentative or delicate or wispy about his figures. They truly reach out and grab you.”

From Molly Pitcher to fellow Middletown heroine Penelope Stout, De Lue sculpted historical figures as well as those of the mythological variety.

De Lue, best known for his sculpture “Rocket Thrower,” showcased at the 1964 New York World’s Fair, was originally from Boston but took up residence in the Leonardo section of Middletown after seeking more space for his sculpting passion.

“Actually, he wanted to move his studio to Rumson,” Rogoff said. “But the Rumson Zoning Board turned him down, so he found what he was looking for in Leonardo.” 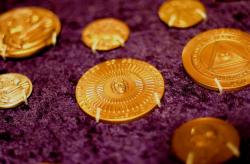 Some of the bronze medals crafted by De Lue. According to Rogoff, De Lue moved from New York City to Middletown in 1962 after outgrowing his studio in the city. Seeking more room to produce the “Rocket Thrower,” De Lue settled in Middletown. Twenty-six years later, De Lue would have produced much of his life’s work from his renovated home and studio at 82 Highland Ave.

“The theme for the 1964 New York World’s Fair was ‘Man’s Entry Into Space,’ and so his ‘Rocket Thrower’ piece was selected,” Rogoff said of the photographs in the gallery that depict the sculptor’s progress. “He created much of it right here in Monmouth County and worked on it in sections. However, the mold had to be dismantled and shipped to Italy to be cast because a foundry big enough here could not be found at the time.”

According to the New York City Parks and Recreation Department, the “Rocket Thrower” stands 43 feet high and is a heroic “bronze figure hurling a rocket heavenward with

his right hand and reaching for a constellation of gilded stars with his left; this version was based on designs for the theme of ‘Man Conquering Space,’ which De Lue prepared in the late 1950s for the Union Carbide Building (270 Park Ave., now occupied by Chase Bank offices).”

In 1962 De Lue was commissioned to make the “Rocket Thrower” and was given less than six months to execute the work at a cost of $105,000. But by June 1963, the full plaster model was completed and was shipped to Italy, where casting at the Fonda Artista in Via Reggio took almost a year. The sculpture was installed just prior to the fair’s opening on April 22, 1964, the department’sWeb site states.

“The need for space to work on the ‘Rocket Thrower’ is probably what brought Mr. De Lue here to Monmouth County,” Rogoff suggested.

Across the Atlantic, De Lue’s work can be seen in many places, but none so hallowed as the Omaha Beach Memorial at Saint Laurent Cemetery in France.

For visitors to the Hartshorne Gallery, there is more to gaze at than “Molly Pitcher” and the photographs of De Lue at work on “Rocket Thrower.” They will encounter dozens of small, palm-size medals commemorating all kinds of awards, distinctions and events, created by De Lue for dignitaries, societies and guilds.

“It is amazing how detailed these small medals are,” Rogoff commented. “I can’t help but marvel at how he was able to go ahead and design and sculpt 60-foot-high imposing figures and then put that same power and energy into something that you can hold in your hand.”

The relief and effects created from De Lue’s handsculpted medals certainly are marvelous.

“He loved to experiment with finish and size,” Rogoff said, motioning toward the three different medals bearing likenesses of American forefathers and heroes, designed for various honors. “The bicentennial also provided him with a lot of opportunity to create medals for various patriotic organizations such as the Daughters of the American Revolution.”

“He sculpted and donated a bust of the Rev. Dr. Martin Luther King Jr. for Brookdale Community College after the original had been damaged by vandals,” she said. “And he also sculpted local settler Penelope Stout on a medal.”

According to MCHA, Stout was an early settler in the Middletown area and was attacked by hostile natives who left her for dead, but she was found by a local Lenape Indian. Her rescuer nursed her back to health and she eventually recovered, married Richard Stout and bore 10 children.

The local sculptor’s pieces on display at the MCHA museum in Freehold are on loan from several different collections and galleries, Rogoff said.

“We don’t usually have fine art on display here, but this has been wonderful and people really seem to enjoy it. One of the collectors, Joseph W. Hammond, of Freehold, has been most helpful with supplying us with not only Mr. De Lue’s work but of history about the artist,” she said.

“We have had several people walk through and reminisce about their own time spent working with De Lue, or about knowing him from the community. From everything I have heard, he seems to have been a really nice man, rather low key and gentle.”

According to Rogoff’s research, De Lue, who was born in 1897, married Martha Naomi Cross in 1933. The couple never had children and instead devoted their lives to De Lue’s gift and passion for sculpting. After Naomi’s death, De Lue sculpted a headstone for her tomb, which is in Old Tennent Cemetery. De Lue lived in Leonardo until he died in 1988.

Rogoff said the Donald De Lue exhibit will remain open until Sept. 15. For more information about the MCHA and exhibits, visit www.monmouthhistory.org.