The challenges Patrick Dowling faced going into the Brick Township High School football season were as much in his own backyard as in the team’s challenging schedule in the Shore Conference Constitution Division. 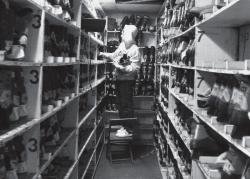 Brick’s Nick Lantieri, 15, retrieves a pair of skates for someone at the Ocean Ice Palace, Brick, on Dec. 27. CHRIS KELLY staff Not only did he have the unenviable task of replacing coaching legend Warren Wolf, who set a state all-time record for victories in his 51 years at the helm, Dowling also dealt with the staunch traditionalists who felt his approach shook up the school’s tradition too much.

And with the team finishing 4-6, the “honeymoon”— the grace period for the first season — is over. Many Green Dragons fans will carefully scrutinize how the team does next season, when returning players are more familiar with the playbook.

“I realize that it’s about winning, and I expect to be evaluated on that after every game,” Dowling said before the start of the season.

And his sometimes daring moves of going for a first down instead of punting from deep in his own territory as he did against Lacey Township High School surprised the “bleacher quarterbacks.”

“We’re in better shape offensively than when we came in,” Dowling said. “We had so much to deal with in the beginning with the critics.”

Quarterback John Applegate, who showed great athletic skill and leadership this season, graduates in June. He leaves a huge void to fill. Junior Sean Henry was one backup, but Dowling said, “We foresee he’ll play somewhere else next year.” Henry returns to the defensive backfield, but Mike Auriemma and Applegate are graduating. Brandon Kieslor, a sophomore, is being groomed for the quarterback spot, although he missed some playing opportunity early in the season when he suffered a broken thumb.

Junior Dylan McDonnell will be back running the ball again and playing at linebacker, where the team will lose Dan Brennan and Justin Kaymen to graduation.

Dowling feels there are enough young players returning and a good talent pool from the unbeaten freshman team. Wide receiver John Scandone graduates along with offensive linemen Kyle Layton and Tyler Mastria, but James Gibbons, Kyle Oliver and Ryan Cole return to the offensive line. Oliver, Gibbons and Cole return to the defensive line as well. Cody Schnebel also is expected to play an even bigger role next season as a senior wide receiver, along with sophomores Kevin Matthews and Ryan Griffith.

“We have a good core of juniors,” Dowling said. “For next season, we’ll have a better start with our linemen with the experience they got.”

Patrick Kearns returns as the kicker for one more season. But Dowling said the team “needs to improve punting,” where Schnebel and Jesse Lyon battle for the start there held by Applegate. Kearns also is expected to start at defensive back as he did later in the season and also may run the ball.