Devin Biscaha, a District 21 runner-up and fourthplace finisher in Region 6 last year, was ready for his most important challenge at 152 pounds for Jackson Memorial High School’s wrestling team. 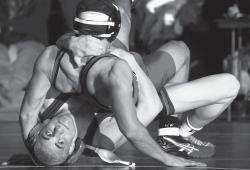 Dallas Winston, an unbeaten sophomore, won his sixth bout via pin to start off the evening at 171, and Drew Murphy pulled out a 4-2 overtime victory over Brian McCrossan at 189 as Jackson Memorial won six of its first seven bouts, a streak disrupted by a pin when Brick Memorial 215-pounder Bill Miller won by a pin at 3:08.

Jackson’s B.J. Young, a senior who is Spencer’s older brother, got a big win that slowed Brick Memorial’s comeback when he handed Jake Vescovi his second loss in only 13 outings at 135 pounds.

Unbeaten defending state champion Mike Morales of Brick Memorial won an 11-2 major decision over James Updyke for his 12th victory to cut Jackson Memorial’s lead to 28-19 and set the scene for Biscaha.

Brick Township High School, meanwhile, slipped to 1-3 on the season when it lost to Toms River High School South, 35-30. Evan Tarver won by technical fall at 215 pounds, and heavyweight Justin Aeling got a pin in the final two bouts to lift Toms River South (4-1) in a Shore Conference A South match.