Anthony Lobianco remembers last season when Brick MemorialHigh School’s hockey team made it to the Handchen Cup finals and the NJSIAA Public School quarterfinals before losing in both. 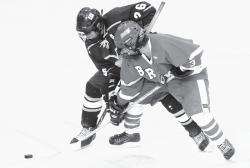 Brick Township’s Brendan Dowd (3) tries to beat out Marlboro’s Nicholas Haase (26) for a face-off during home hockey game at the Ocean Ice Palace on Jan. 15. CHRIS KELLY staff “We got a taste of it and want more of it, another chance in the cup finals,” Lobianco said.

He’s been doing his part, with 21 goals on the first shift line with the Person twins — sophomores Adam and Tyler.

Lobianco’s hat trick, which included a crucial goal late in the second period, lifted the Mustangs to a 6-1 victory over rival Brick Township High School on Jan. 11 at Ocean Ice Palace.

“I thought we played a good defensive game when Brick got into our zone and Kevin [Talty, the goalkeeper] came up with a few key saves that could have saved the game,” said Brick Memorial coach Chip Bruce, whose 9-3 team has won four straight. It was the first loss for the Green Dragons.

“I think we played a very good game, a total team effort,” Bruce said. “Offensively and defensively, on both ends we did well. The boys played hard.”

Bruce credited the defense of Jason Franceschini and Tom Lindquist on the first shift and Colin Trevors and Kyle Huhn on the other as being instrumental in the victory. Brick Memorial had a 24-21 edge in shots.

Freshman Nicholas Auriemma scored off passes from Patrick Kearns and Connor Noonan to pull Brick Township to 2-1 in the second period. Lobianco then connected on a power play goal off Brick Township goalie Dylan Beaver. Franceschini, Tyler Person and Mike Stopin scored the other goals for Brick Memorial. Bruce called senior forward Stopin the team’s “unsung hero” for some timely goals he has scored of late.

Bruce said he was a “little surprised” at the margin of victory over Brick Township.

“Going into the third [period], we had momentum and didn’t let up,” he said.

“We had to back-check better and play better defense than we did against Brick Memorial,” Brick Township coach Bob Auriemma said. His team bounced back strongly last week with a pair of victories over Howell, 4-1, and Marlboro, 7-1, to go to 9-1-2 on the season. Matt Gumina, who leads the Green Dragons with 10 goals and 16 assists coming into the week, fired in a pair against Howell, and Mike Auriemma and Kearns scored the others.

As for Memorial, Lobianco said he “thought we’d be one of the better teams, but not like this. As a team, we’re talking more than last ear — a lot of communication and just getting along and playing for each other. We have to just keep moving, shooting and passing.”

Lobianco said he is doing his part.

“I’m having a quicker start than last year,” he said. “I’ve had more of an opportunity putting the puck in the net, and I’m not missing as usual.”

Lobianco and Bruce credit the Person twins for setting Lobianco up for many of his opportunities. They had five assists between them against Brick Township.

“I’m 5 feet 10 and they’re bigger than me, and they always look to me and tell me where to go. They’re big and body really well,” Lobianco said.