When I first was contacted by Greater Media Newspapers in 2002 and given the opportunity to join the new Brick Bulletin staff, I realized it might be a daunting but exciting challenge to establish coverage from scratch in a somewhat unfamiliar territory. 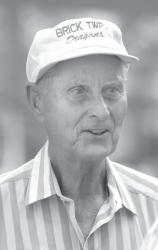 Warren Wolf But it didn’t take long to realize this is a town with a rich sports legacy where finding and developing sports features would be easy. I would find that the stories write themselves and, as I often would say, “the well never runs dry” with great stories to tell.

In my 40 years in the newspaper field, this was an easy “beat” to cover because there were stories to find and story ideas shared by our faithful readers. My reputation of writing unique stories was realized by some who would say to me, “Yeah, and I’ve got a story for you for this week.”

Even for this week, there were enough ideas to fill two more issues in the weeks ahead. Sadly, that will not happen. This is the end of the line.

But I often was happy to hear from coaches and readers that they enjoyed picking up a paper where they never knew what to expect, which I consider the highest compliment. There were stories that not only filled scrapbooks for some but gave perspective to many.

In less than a decade, there were so many memorable stories to report of athletes and teams that reached goals that seem so difficult to achieve. Many cannot be measured in statistics.

I remember early in my coverage how legendary former Brick Township High School football coach Warren Wolf commented on how one of the players on his team made a “heck of a play.” I misread my handwritten notes as a “hell of a play” and wrote that. Perturbed, Wolf spoke to me afterward and demanded a correction, which he got, because he said he does not use that word in conversation. I went on to learn that he is a church-going man. He held true to that moment throughout my knowing him.

Despite his stature, Wolf always returned my phone calls, which I cannot say for too many coaches, who could learn a lesson from him.

I was asked to write the top 10 stories under my watch, which I find nearly impossible. So I decided on the 10 most memorable to me, a list that grew to 11, not necessarily in order of preference:

1. Former Brick Township High School All-State hockey star Jim Dowd wrapped up an illustrious 14-year NHL career that included his scoring a decisive goal for a Stanley Cup championship team in 1995. In his final season three years ago, he led the Philadelphia Flyers to the biggest turnaround of any NHL team that season, ending in the semifinals of the Stanley Cup. Along with two different radio shows where he lends his great insight, Dowd also continues raising funds for worthy causes with his Shoot for the Stars Foundation.

2. Vanderbilt and the University of Maryland Eastern Shore battled for the NCAA women’s bowling championship before a national television audience on April 14, 2007, in a showdown that also pitted two friends and high school first team All-State players from Brick on opposite sides and captivated the TV broadcasters. They were former Brick Memorial star Jessica Worsley at UMES and former Brick Township High School star Karen Grygiel at Vanderbilt, which won its first national team title in school history. Worsley, a junior, was named to the All-Tournament team. Grygiel, a sophomore, had a 195 average that season in 60 games, 36 of them over 200.

3. Steve Healing made the improbable comeback from two Tommy John surgeries to pitch Rutgers University to its last Big East Conference baseball title in the 2007 season with a thrilling 6-5 victory over the University of Connecticut in which he was carried off the field afterward. Healing made second team All-Big East.

4. DeAnne Hahn emerged into national prominence in the shot put and set school records that likely will stand for a long time in the shot put and discus after transferring to Brick Township High School in her sophomore year. Qualifying for the Meet of Champions for all six indoor and outdoor seasons, Hahn now is setting standards as one of the best ever in the hammer throw at the University of Minnesota. Let’s not forget Ryisha Boyd, an outstanding sprinter from Brick Township, and Andrew Brodeur, a regular Meet of Champions qualifier in cross country and distance running events, off to college careers at the University of Illinois and Duke University, respectively.

5. Former Brick Township pitching star Joe Testa was considered too short at 5 feet, 10 inches to fulfill a dream of playing baseball professionally or even to compete on an NCAA Division I level. But Testa set virtually every meaningful pitching record as a starter at Wagner College and signed a free agent contract with the Minnesota Twins, where he worked his way up to the High A level, aptly pitching for the Fort Myers Miracle in the Florida State League in his first two seasons. He hopes to reach the Double- A level when training camp begins in a few weeks.

6. Brick Memorial’s girls soccer team accomplished a rarity in any sport — three state straight championships in 2002 to 2004. The program has become one of the standards by which many others around the state measure. Coach Bill Caruso has proudly established a tradition of excellence with a strongly supportive alumnae base, evident in last summer’s well-attended alumnae game. Fans can put the postseason tournaments on their schedules every year.

7. Sparked by state champion Steve Santos, with a 43-0 record at 152 pounds and off to a wrestling career at Columbia University, and Mike Morales, who went 40-2 at 130, Brick Memorial’s wrestling team won back-to-back NJSIAA Group IV titles, the toughest division in the state. Not to be overlooked was Brick Township High School’s team that won its first-ever Group III Central title behind 30-bout winner Ricky Bandejas at 112.

8. Legendary coach Warren Wolf concluded a career two seasons ago that likely will never be matched in New Jersey — 51 years at the same Brick Township High School where he started the football program and left with 361 coaching victories. He also started hockey there. His class and dignity in winning and losing has made him an exemplary figure among his colleagues. Wolf apparently will come out of a brief retirement to coach at Lakewood. Wolf wrote a book about the head coach under whom he served early in his coaching career at Memorial High School in West New York, titled “Joe Coviello: Master Mentor.” He also is completing an as-yet untitled book chronicling his 51 years with the Green Dragons football team.

9. Brick Memorial won its second state football sectional playoff title in six years in 2008, decisively beating Sayreville War Memorial High School. It also won the 2003 title behind tight end Garrett Graham, a projected third-round pick in the upcoming NFL draft. Graham concluded a career at the University of Wisconsin by helping the Badgers to a 20-14 victory over Miami in the Champs Sports Bowl. Graham had some great games on national TV but in this one, he fumbled away a 15-yard pass at Miami’s five-yard line. But it could not take away a great season in which he caught 51 passes for 624 yards and seven touchdowns. Also on that 2003 team was quarterback Chris James, who started for the past three seasons as quarterback at The College of New Jersey.

12. Bob Auriemma last season coached his 1,000th game for Brick Township High hockey – a lopsided victory where he has more than 600 victories and a treasure trove of Gordon cup and public school state titles. Auriemma, who played high school football at Memorial High School in West New York, took over the program started by Wolf in the late 1960s.

Also, not to be excluded: Brick cheerleading teams that have won national titles in recent years, and the Brick Dragons Pee Wees that saw their trip to the national finals come one game shy in the eastern regional finals after 13 wins.

Certainly, there are countless memories and friends that have made the last eight years seem more like a lifetime. But the great experience has been too short. Now I know how Conan O’Brien feels.