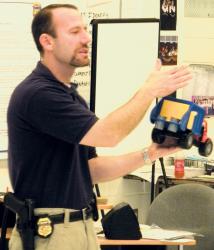 IRS Special Agent Rob Glantz visited the students at Sayreville War Memorial High School on Feb. 9 to enlighten them on the criminal investigations side of the IRS.

“It’s important for them to know the different types and to be knowledgeable of the different areas of accounting,” Feldman said. She heard about Glantz and his work through a mutual friend.

“I said, ‘I’ll have to get this guy to come talk to my kids at Sayreville,’ and that’s what I did. He was very responsive,” she said .

After taking her students on field trips to Rutgers and Rider universities, where Glantz was explaining the Adrian Project, a program that allows students to work with IRS investigators on tax cases, Feldman initiated contact and set up the presentations.

Glantz began by telling the high school students how he got into the position he has now held for almost 20 years.

“I was always intrigued by law enforcement, and growing up as a kid I had a few neighbors who were local police officers. I always thought their jobs were exciting. But I knew, for whatever reason, I did not want to be a street cop,” Glantz said. “When I heard about the special agent position at the IRS, it sounded like a really exciting job.”

Before beginning his work as a criminal investigator, though, Glantz worked as a tax fraud investigative aide. At the time, Glantz did not have enough accounting experience — he was a sociology major, he told the students— so he got in the door and worked his way up from there.

Glantz said he had to participate in an extensive field training program at the Federal Law Enforcement Training Center in southern Georgia, where he was instructed in both law enforcement and IRS practices.

Currently, Glantz works as public information officer for the IRS in New Jersey.

“My main role is to see that the cases the agents work on get publicized,” he said.

There are two goals for his job. First, to create publicity that serves as a deterrent for other criminals. If a business owner is caught violating tax laws, the news could stop other people from acting in a similar fashion. The second goal is to show the public the effectiveness of the system.

“The vast majority of Americans are hardworking, honest Americans who do the right thing. They want to know the system is fair in the sense that, if someone is doing something wrong and we at the IRS find out about it, we’ll do something about it,” Glantz said. “If they don’t see the consequences and don’t see the results, then the system breaks down.”

The criminal investigation side of the IRS, Glantz explained, includes only about 3 percent of the 100,000 IRS employees. They are sworn officers of the law who are allowed to make arrests and execute search warrants, among other tasks.

The blend of work, he said, is what makes the job so interesting.

“It has a great mix of both inside-theoffice work and out-on-the-streetwork. Every day is different,” Glantz said.

Illegal-source cases, Glantz explained, occur when someone receives income illegally, such as a politician accepting a bribe.

“Income from whatever source is taxable, so even if you take a bribe, you have to report that on your tax return,” he said.

The biggest pool of cases comes from the legal-source category — people who earn money legally but don’t report it.

No matter the type of case, the process is the same.

Following the money, Glantz said, often involves working with other agencies, such as the FBI.

“In this day and age, it’s not just a tax crime, there’s always something going on,” he said.

Regardless of who else is involved, the cases can take months, if not years. Following paper trails, obtaining warrants and conducting interviews all take time, but all are of absolute necessity.

“Criminal tax cases can be very complicated. They’re not complicated in the concept of the crime, but proving that case beyond a reasonable doubt has a lot involved,” Glantz said.

He pointed to two pieces of advice he received early on that help dictate how he tackles every case. First, “try and kill every case, try and get rid of a case, try and find a reason not to investigate a case.” The second is to assume that every case is going to go to trial. “By doing that,” he said, “you’re going to dig and turn over every rock.”

Finding mounds of evidence helps everyone involved. About 80 percent of the cases, Glantz said, do not make it to trial because of the evidence that is collected.

“I’ve had numerous defense attorneys turn to their clients and say, ‘Jim, you’re guilty as far as I’m concerned, so you better sign up.’ That’s how damning some of the evidence can be.”

Once the evidence is gathered, Glantz’s part of the case is done.

“All we do is gather evidence. I don’tmake the law, I reinforce the law. Does someone get indicted? I don’t make that decision, it is up to the grand jury,” Glantz said.

Feldman addressed a question on many students’ minds by asking Glantz about the gun holstered on his belt. Did he ever need to use it? she asked. Was he scared to use it?

Glantz said he brings the gun on every searchwarrant entry, to protect himself and his partners when stepping into a situation with many unknown factors. However, the only time he has ever fired his weapon has been during mandatory firearms training.

Being involved in a search warrant, he said, is not necessarily scary.

“Your adrenaline is always fired up when you’re doing a search or arrest warrant,” Glantz said.

IRS special investigators must also use their minds to think of creative ways to go about gathering evidence.

“Anything you can think of in law enforcement that you’ve seen on TV or heard in real life, we can do,” Glantz said.

He continued, holding up a toy plastic garbage truck. “I get to live out my childhood dream. You just have to think outside of the box a little bit,” Glantz laughed. A suspect’s garbage, he said, could contain valuable leads or evidence. Sometimes, in cases where a suspect does not leave their garbage out the night before it is collected, Glantz would dress up like a sanitation worker in order to get the bags he would like to look in.

At the end of the day, what keeps Glantz going, through the stakeouts and the hours of investigating cases, is simple.

“[It’s] knowing that at the end of every day, I have made a difference,” he said. “The honest taxpayers want to know that our tax system is fair in the sense that if somebody is intentionally cheating on their taxes, someone is going to do something about it. That is where IRS special agents come in.”