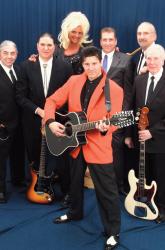 The Jerry Spathis Rockabilly Band is ready to take New Jersey by storm. The Jerry Spathis Rockabilly Band is a combination that works. The seven musicians who make up the Middlesex County-based band, which formed in October, all come with well-accomplished backgrounds, and they all have a common passion and love for music and describe their amicable union as “scary perfect.”

“There are no egos here,” said Gina Petner Ramos, vocalist and percussionist.

Baliya said what makes a band successful is how well its members get along.

“I was in a rock band where there were so much head games and so much tension, it was terrible,” he said.

Spathis, a Metuchen resident and a professional singer and entertainer, said he has always wanted to form a group that would provide a rockabilly sound while paying tribute to the likes of 1950s, ’60s and ’70s idols Ricky Nelson, Chuck Berry, Elvis, The Mammas and Pappas, The Monkees, and more.

The band rehearses every week at Mancuso’s residence in Milltown.

“We are rehearsing sets of 35 songs … our goal is to have 60 arrangements done,” said Spathis. “There is a lot of excitement. We just did our photo shoot, and we are recording our first demo this weekend at Paul’s studio, Suite 16, in Piscataway.” When setting out to form the band, Spathis said, he spoke to his wife about it and then reached out to Beilski and Sukovich, whom he has known for years. It snowballed from there, and auditions were held.

“I got excited because I liked what I was seeing and hearing,” he said.

Spathis said he almost cried when he heard Baliya play.

“He can play [these musical selections] with his eyes closed,” he said.

Spathis then set out to find a keyboardist.

“The keyboardist I had in mind was just not committed,” he said. “We then got in touch with Alex, who came by to audition. He said he would be committed and would rearrange his schedule for the band.”

Spathis stressed that this is no “garage band.”

“We are dealing with extremely experienced musicians,” he said.

In December, Spathis met Petner Ramos, an accomplished singer and a fan of all different types of music, though her niche, she said, is singing country music such as that of Bonnie Raitt.

“I was a frequenter at the Stone Pony,” she said, noting that she has sung with the likes of Bruce Springsteen.

Petner Ramos was at one of Spathis’ shows in December and went up to him afterward to tell him she was also a singer.

“I liked that about her — she wasn’t afraid,” Spathis said. “I needed a backup vocalist, and she came to audition.”

Petner Ramos had heard some rockabilly growing up but was not too familiar with it. She’d have to learn fast.

“It was a Friday and I had to learn 40 selections by Monday,” she said, laughing. “But it was fun learning the songs.”

Spathis said the response to the new band has been amazing. Sukovich said he believes that is because “a lot of people can relate when listening to the music.”

“Some of us didn’t know each other, but everybody fell into place with very little effort,” she said.

Spathis said the goal for the band is to perform around the state and in Pennsylvania, Connecticut and New York.

“We are doing what we love … it’s infectious,” said Baliya. “When it isn’t fun anymore, Iwill putmy guitar away. But that time has not come yet.”

Beilski said coming to rehearsals is not work for him.

“This is where I blow off the steam and I am as happy as I can be when I get home,” he said.

Spathis said he wants people who come to the shows to feel the energy the band members feel when they come together.

“I want people to have fun, dance and have the music bring out their feelings and emotions,” he said.

For listings of upcoming shows, visit www.jerryspathis.com. For more information about the band, email jdsword62@live.com and visit www.youtube.com/user/muttgang62.