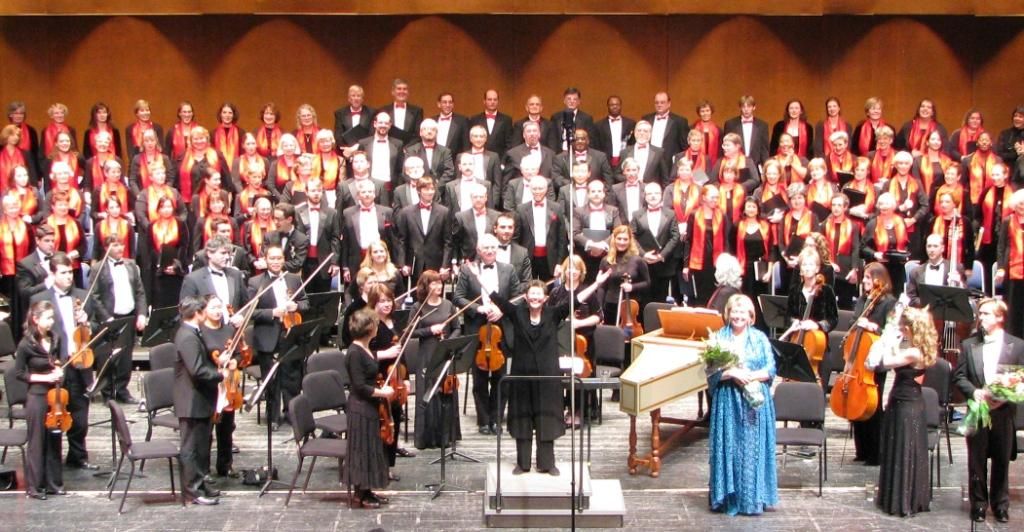 By Mary Trigg
Princeton Pro Musica to Present Handel’s Messiah for the 41st time
Princeton Pro Musica will present Handel’s Messiah for the 41st time on Sunday, December 11, at 3 p.m., at Patriots Theater in the Trenton War Memorial.  Frances Fowler Slade will conduct the 100-voice chorus and acclaimed orchestra with  soloists Julianne Baird, Amy Zorn, Scott Murphree, and Elem Eley.
This performance will be the last Messiah performance with Princeton Pro Musica for Founder and Artistic Director Frances Fowler Slade, who steps down at the end of June.  “Our first performance was at the War Memorial in 1982,” she says, “so it is fitting that this final performance of the Messiah for me as Artistic Director will be there.  I hope that the December 11 Messiah will be a summation of Princeton Pro Musica’s 40 preceding performances.”
Executive Director and Princeton Pro Musica singer Mary Trigg looks forward to singing “Messiah” under Ms. Slade once again. “Frances brings out the drama in the score, which makes this oratorio engaging and fun to sing. Her extensive knowledge of the text and the music adds a depth to our performance that I believe speaks to the audience on many levels.”
For this performance, Princeton Pro Musica is pleased to welcome back soloists who have delighted our audiences with their immense talent. Soprano Julianne Baird has been hailed a “national artistic treasure” (New York Times) and as a “well-nigh peerless performer in the repertory of the baroque.” It was also stated:  “she possesses a natural musicianship which engenders singing of supreme expressive beauty.” With more than 125 recordings to her credit, Julianne Baird is widely acknowledged as one of leaders in music of the 17th and 18th centuries.
Mezzo soprano Amy Zorn has sung under the batons of Seiji Ozawa, Henry Lewis, John Harbison, Craig Smith and Yves Abel.  She has been heard in the major operatic roles nationally and as guest oratorio soloist at Harvard and Brandeis Universities, Ithaca College and with the Schubert Music Society of New York City.  She served on the faculty of Ithaca College from 1990-95 and has been on the faculty at Westminster Choir College since 1996.
Tenor Scott Murphree is a distinguished singer of the concert, recital and opera stage. He will be the tenor sololist for the annual National Symphony Orchestra Messiah Sing -In at Avery Fisher Hall at Lincoln Center this year.. He has also created roles in several world premieres of operas , and he has sung with the Central City Opera, Glimmerglass Opera, Des Moines Metro Opera and Opera Delaware.
Bass Elem Eley has performed in leading concert and recital venues, including Carnegie Hall, Avery Fisher Hall, Alice Tully Hall, and other New York City venues. He has appeared with the Symphony Orchestras of cities throughout the United States. Mr. Eley sang the title role of Don Giovanni for his debut at the Operafestival di Roma and has appeared in productions with the Opera Companies in the United States and Europe.
Princeton Pro Musica was founded in 1979 by Frances Fowler Slade and has grown to be the premiere adult chorus in Central New Jersey.  The 100-voice auditioned chorus and orchestra exist to perform choral masterworks and other choral literature with uncompromising excellence.  Princeton Pro Musica is supported by Discover Jersey Arts, NJ Council on the Arts, and the NJ Cultural Trust as well as private foundations. Tickets may be purchased at the door, online at www.princetonpromusica.org, or by telephone at  609-683-5122.