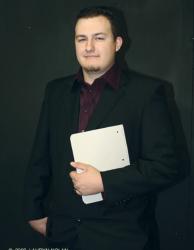 Harder has taken his passion for pro wrestling and created a weekly podcast called “The Hardway.”

“My purpose for this podcast is to explore the world of pro wrestling and get the stories of wrestlers that have been on different levels, whether it has been on television, in wrestling developmental companies, wrestling on Internet pay-per-view, or starting their careers,” Harder said.

It’s a unique challenge to take something as visual as wrestling and cover it in an audio format, Harder said.

“When you’re doing something with audio, it’s something totally different,” Harder said.

“As a pro wrestling commentator in the independent circuit, I am able to meet one on one with these talents and get in-depth, personal interviews with these guys,” he said .

But as much as wrestling is a passion, so is broadcasting.

In high school, Harder announced for a few basketball games for the local cable channel. And his favorite course at South River High School was telecommunications, he said .

Harder said he has been influenced by performer Uncle Floyd, who had a comedy and variety show for more than 20 years.

“I aspire to make this the ‘Uncle Floyd Show’ of wrestling podcasts,” Harder said, adding that he incorporates elements like comedy sketches into the podcast.

Harder has done a dozen podcasts to date, and a subscription to “The Hardway” is available for free in the iTunes store. There it has a five-star rating, and plenty of positive written user reviews. Harder said he has around 50 subscribers to date, with some as far away as the United Kingdom and Australia.

“I never expected to get anyone outside the tri-state area — or my family,” he joked. However, he said he would love to get more local traction. “I hope everyone in South River takes hold of it.”

Harder said much of the feedback has been both positive and constructive — such as advising him on the best placement of commercials on the podcasts, which are about an hour long.

“I’m a perfectionist,” Harder said, explaining that he appreciates hearing how he can improve. He records some elements — such as interviews — at wrestling events, and records his commentary from home.

Harder said his primary goal is to let audiences know the stories of those in the pro wrestling world.

“Alot of people look at the world of wrestling as something fake,” Harder said, adding that there’s much more to wrestling than what the audience sees at a match. “But the travel and injuries are real.”

Harder said it’s those stories he wants to tell.

He said he primarily focuses on local wrestlers, like Leon Saint Giovanni from Edison and Darius Carter from New Brunswick, but on occasion expands his reach.

Harder said he would definitely enjoy making a fulltime career out of podcasting.

“It’s still in its infancy,” Harder said. “You haven’t seen anything yet.”

To find out more, visit the iTunes store, or Harder’s websites, http://thehardway.podomatic.com and http://jonharder. xanga.com.