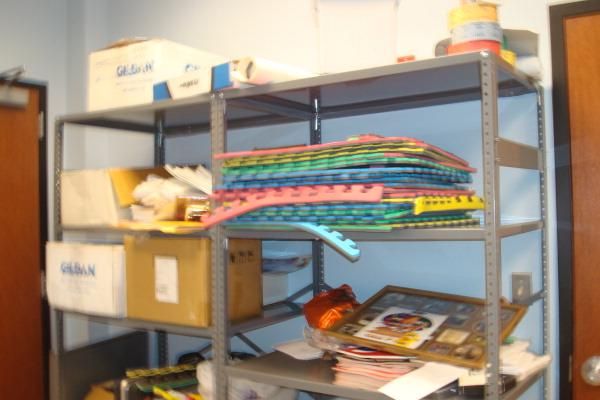 David Kilby, Managing Editor
CRANBURY — Sometimes police departments need fancy new technology to serve their community more efficiently, and sometimes they need something much less expensive like a more organized storage area, which is what Eagle Scout Joshua Diamond gave to the Cranbury police.
”We had some built-in shelves that were just not working the way we wanted them to work,” said Sgt. Ryan Dworzanski, who helped Joshua with the project. “There was equipment that was cluttered. We designed a whole new use for the (storage) area.”
He added, “Basically, it was just a storage closet. Everything was scattered throughout the building, in lockers, outside the closets, in the hallways. Now everything is neat and organized. It’s a one-stop shop.”
”It’s helping community,” said Joshua, a sophomore at Princeton High School. “This way, (police officers) can spend less time getting the gear ready. They can get dressed, grab their gear and go out on the road and protect the community.”
”It just allows for better storage of the equipment and better accessibility for the officers,” Sgt. Dworzanski added.
The storage unit has been used every day since it was finished about eight months ago, and it’s still as well organized as it was the day it was finished.
”We still get compliments on the efficiency of it,” Sgt. Dworzanski said.
Joshua said he wanted to do something for the Police Department because he has “always enjoyed the lights and sounds” of police work.
He said he got interested in the police profession when police visited his class for a project in second grade. The police showed Joshua and his class the equipment they use, like their pepper spray and handcuffs, and he was hooked.
”He’s always been drawn to the profession,” said Douglas Diamond, Joshua’s father. “He has his own influence. He knows what he wants to do, where he wants to go. He’s a very driven young man.”
The entire project, including the planning and fundraising, took more than 100 hours.
”I’ve been so involved in Scouts, and I’ve really enjoyed it,” Joshua said, adding he wants to be a rescue diver and police officer.
”He lives for Scouts,” Mr. Diamond said. “That’s his thing. He loves the camping, loves the camaraderie.”
About five to eight other Scouts from Troop 52 helped Joshua with his Eagle Scout project.
Thanks to the project, the portable radios, vehicle keys, defibrillators, patrol bags and coats are in one easy-to-access place. The closet also is convenient because it’s right by the door the officers use to enter and exit the headquarters so they can just pick up and drop off everything at the closet without the need to bring anything into the building.
”We walked back here, and the light bulb went off, and the eyes lit up,” Chief Rickey Varga said as he explained how the department came up with the project idea for Joshua. “We saw the mess, and we wanted to do something about it. We wanted something that would help officers in their everyday duties. When we saw what we had back here, it was obvious we could have a base made to help prepare officers for their job on the road. It really was a homerun all the way around.”