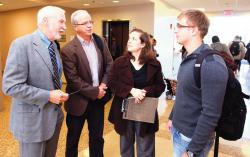 But do voters have enough information to decide who should serve as the next president of the United States?

Middlesex County College’s Democracy House: Center for Service Learning and Civic Engagement is helping to make sure of that. The program hosted an event called “You Decide — The Presidential Election: What we know and what we think we know,” held at Crabiel Hall at the college on Oct. 11.

Ross Baker, a political science professor at Rutgers University, and Tom Moran, a columnist for The Star-Ledger, presented a look at the candidates — Democratic President Barack Obama and Republican Mitt Romney — and some of the issues.

Both speakers are considered experts in the field and are well known statewide.

Baker had served on the staffs of Sens. Walter F. Mondale, Birch Bayh, and Frank Church, and as a consultant to the Democratic Caucus of the U.S. House of Representatives. In 2000, he served as a senior adviser to Sen. Chuck Hagel (R-Nebraska) and Patrick J. Leahy (D-Vermont).

Moran is an editorial copy editor at The Star-Ledger and columnist. He has covered politics for 20 years.

Baker told the crowd of mostly political science majors that this year’s election is rather unusual in that chances look pretty good for a president seeking a second term, despite factors that often derail second-term wins; one such factor is the economy.

“President Jimmy Carter defeated Ford then, but in 1980 when Carter was seeking re-election, the unemployment rate was 7.7 percent, [and] he was defeated by Ronald Reagan,” Baker said.

In 1992, President George H.W. Bush was seeking re-election with the unemployment rate of 7.5 percent. He was defeated by Bill Clinton, he said.

Baker said an economist colleague created a formula on the correlation of the economy and a second term. The formula — if the unemployment rate is under 7 percent, the president has a chance for another term.

Today, the unemployment rate is 7.8 percent after being above 8 percent for 43 straight months.

“If we just looked at this strict economic factor, Obama is toast. … Clearly he isn’t toast,” said Baker. “The presidency depends on a lot of factors … likeability can be a factor.”

Moran said when he was watching the first debate, he wanted to throw things at the television.

“It was a toss-up,” he said. He said both candidates made some misleading statements.

He said what scares him most are uninformed voters.

“These are the ones that don’t follow too much of what is going on and can easily be fooled and easily swayed by what is said in a 90-minute debate,” he said. “It’s scary to see the polls and how much they have swung after the first debate. The ball is in the hands of the undecided voters.”

Baker and Moran explained why most of the campaigning is done only in the nine swing states — Colorado, Florida, Iowa, North Carolina, New Hampshire, Nevada, Ohio, Virginia and Wisconsin.

“There’s no presidential election going on in New Jersey,” said Baker. “This is because we are a strong Democratic state. In 2008, people living in South Jersey got to see the Philadelphia television stations, [which was a swing state at the time].”

As campaigning goes on, Baker said, the candidates will pull out of the states they feel they cannot win.

The discussion opened up to the captive audience of 120 people, which touched on topics of Obamacare and Romney’s healthcare plan and the turmoil in the Middle East.

Baker said the Obama administration is slowly and methodically strangling the Iran economy.

“The rial [Iran’s currency] has fallen 80 percent,” he said. “It’s not the defense department here, it is the treasury department. Iran is really sucking wind.”

Moran said he urges everyone to vote. He said in New Jersey, not only are residents voting for the next president of the United States, but also for the Building Our Future Bond Act.

If approved by New Jersey voters in November, the Building Our Future referendum would authorize $750 million in bonds to provide grants to New Jersey’s colleges and universities.

Pat Cavanaugh, of East Brunswick, who is taking a constitutional law class at MCC, said she enjoyed the commentary by Baker and Moran; however, she said she felt the panel should have included someone from the other side — a Republican.

In the middle of the discussion, Cavanaugh, a Republican, expressed her feelings to Moran and Baker, which prompted Moran to admit that he was voting for Obama.

“We should have had all the faces,” she said. “I did learn something today and that was the education proposition. I support education.”

Cavanaugh explained that she is not your traditional student going back to school. She has worked as a nurse, and has a B.S. in nursing from Rutgers University and a master’s degree in nursing administration from Hunter College in New York.

“I’m thinking of trying law school,” she said. “That is why I’m taking a course [at MCC]; it’s a great program here.”

Jennifer Altman, faculty director of Democracy House, said she discussed with other faculty members about putting together the “You Decide” program.

“We feel it’s critical for students at MCC to have an opportunity to hear from top scholars and journalists in the state about the presidential election,” she said.

Democracy House, according to its website, aims to develop the civic confidence and competence of students by creating opportunities for them to work on community problems during their undergraduate years.

Also at the event were members of the nonpartisan N.J. Public Interest Research Group (NJPIRG) from Rutgers University, which provided voter registration. By the end of the event, approximately 20-plus voters were registered, according to Nick Divikar, a Rutgers graduate student.