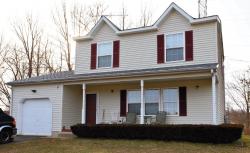 NICOLE ANTONUCCI Clement House, located on the grounds of St. Clement Church in Matawan, provides shelter and support services for families in transition. MATAWAN — A place to live and receive help building life skills can make all the difference to a family struggling to make ends meet and rebuild their lives.

After losing their home in Texas and exhausting their savings, and without anyone to turn to, Matawan natives Regina and Kevin Kaeser and their two children were homeless in 2010.

“We ended up back in Jersey and things didn’t work out right away for us,” said Kevin, who had moved his wife and two children to Texas, where he was investing in homes and rehabilitating them.

However, the economic recession short-circuited their plans and the family moved back to New Jersey.

“I ended up getting hurt and needed surgery on my shoulder,” Kevin said. 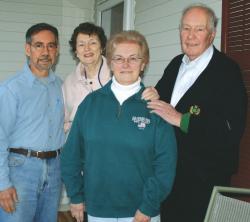 Members of the Clement House board include (l-r) Steven DiStefano, Joann Colot, Jane Slee and President Frank Mack. With no place to call their own, the family was split apart, with each of the two children living with a relative and Regina and Kevin living with a friend.

Then they heard about Clement House in Matawan through a friend who saw a posting about the transitional housing in the St. Clement Church bulletin.

After applying to live in the house and being interviewed, the Kaesers became the 15th family to move in.

The 2,400-square-foot, single-family home, located on the grounds of St. Clement Catholic Church, Route 79, provides shelter for one family at a time, rentfree, for up to 24 months.

The house is independent of the church and is operated by a nonprofit organization funded wholly by donations.

According to Frank Mack, president of Clement House Inc., the goal is to provide opportunities for building skills including education, job training and budgeting to families in transition.

Members of the volunteer group that runs the house meet with the family in residence on a weekly basis, helping them set financial goals so that when the family leaves, they will be financially independent.

Instead of buying breakfast and lunch on the way to work, Kevin gets up a little earlier each day to make breakfast for himself and his son.

Regina, who loved to stop at a coffee shop, learned how much money she could save just by making coffee at home.

“It taught us to budget better,” she said. “It taught us that if you can’t afford it, you don’t buy it. It taught the kids the same lesson.”

Upon returning to Matawan from Texas, Regina was hired by the Matawan-Aberdeen Regional School District as a dispatcher for the transportation department.

With assistance from Clement House, Regina is taking classes at Rutgers University so she can qualify for promotion in the department.

The first class was paid for by Clement House so that Regina could accrue funds for the remaining classes that she would need to take.

“That was a great help,” Regina said. “They are very concerned and whatever resources they provide, they don’t make you feel stupid. They are very encouraging.”

Louise Peddell, a new member of the Clement House board of trustees, said that after attending meetings with Mack and the family, she was impressed by the services that Clement House provides.

“It’s not like, ‘Here is a house, good luck.’ We are going to counsel you, we are going to train you, if we have the funds to do so,” Peddell said.

“It is bridging the gap to independence. Every county should have a Clement House,” she added.

In 23 years of operation, Clement House has a history of helping families in financial turmoil.

According to Mack, in 1990, Monsignor Edward Strano, pastor of St. Clement Church at the time, gave his approval for a house to be built on the church property to house families in need.

With the approval secured, the committee heard that the New Jersey Shore Builders Association was looking for a “good works” project.

“It took us two years to build,” Mack said.

The house, which was dedicated on Sept. 23, 1990, is used as a stepping stone for families to transition into more permanent housing.

Residents of Clement House are responsible only for the maintenance of the house and utilities, he said.

Mack said that after the Kaeser family moves on, the goal is to find a family that has been displaced as a result of superstorm Sandy.

“There are a lot of people that need help. They are in hotels, and they are cutting off the hotels at the end of the month so they are going to need a place to go,” Mack said.

“I am sorry that we only have this one house. I wish we had a lot more.”

Mack explained that the application process for Clement House looks at family history and current status, but with so many families struggling to recover from the October storm, choosing a family is going to be difficult.

“It is going to be hard to choose. We want to make sure that the family that comes in has a good chance for success,” he said.

“That means they are willing to find a job, willing to get an education. Those things are critical for us, because we want them to be self-supporting when they leave here.”

Two years after finding Clement House, Kevin and Regina have full-time jobs, money in the bank and are preparing to transition.

“Things are starting to turn around, slowly, but they are turning around. We are able to support ourselves again,” Kevin said, adding that the family plans to move out of Clement House by June.

“It’s a little scary to move on, but it’s something that we have to do. It is comforting that we see them every month, and in a couple of months we are not going to have that anymore.”

Regina added that without Clement House, the family would never have survived.

“Clement House saved our lives. I honestly don’t know where we would have ended up if they didn’t come along,” Regina said.

“When the family comes into the house we practically adopt them because we meet with them so frequently,” Mack said. “Sometimes when they leave its traumatic because we have grown so attached.”