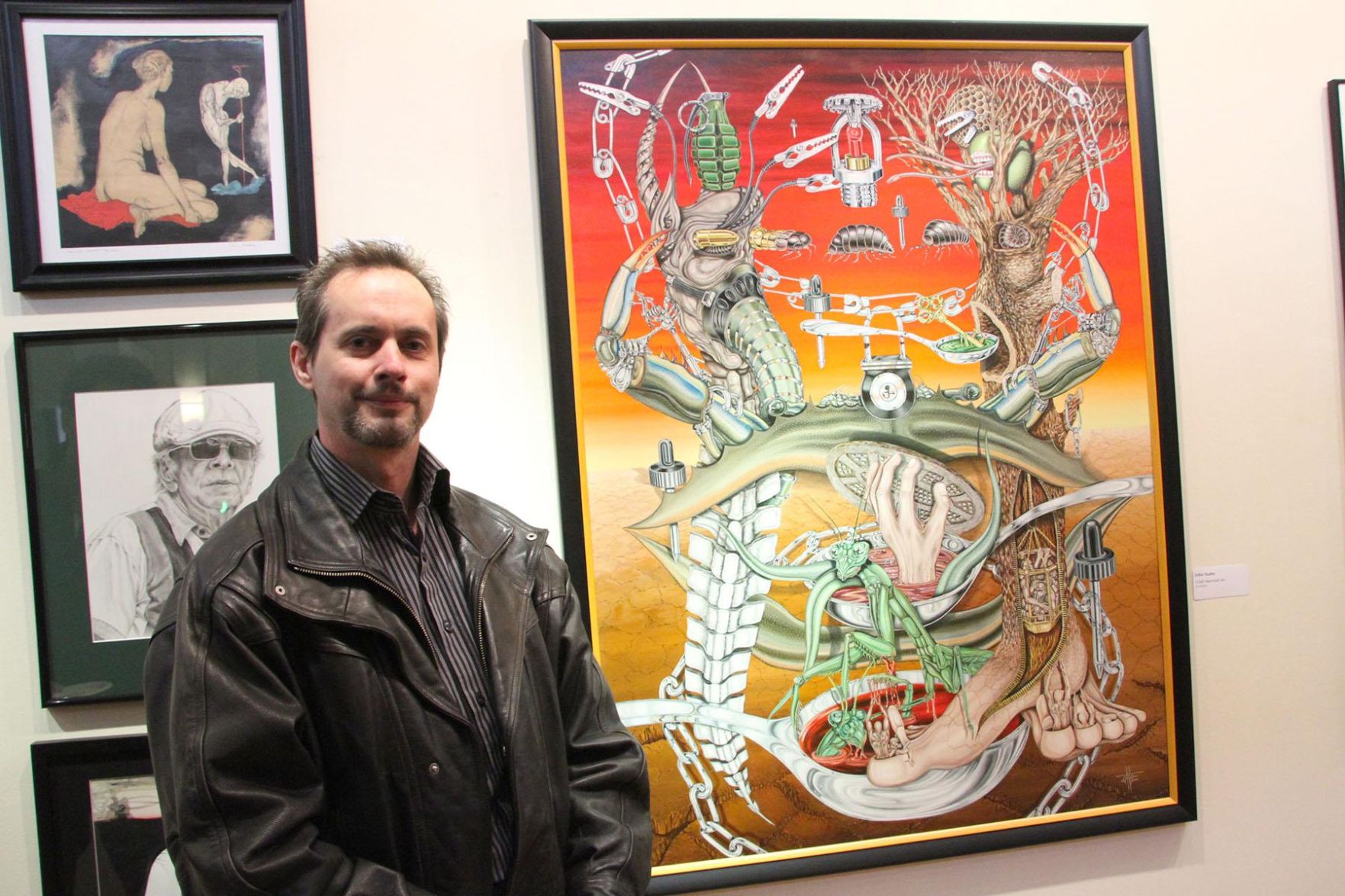 By Wendy Humphrey
Artistic vision comes in all colors, shapes and sizes at the Mercer County Artists exhibit now on display at the Gallery at Mercer County Community College through April 4. One-hundred-seven works by 88 artists include paintings in oils, acrylics and watercolors, as well as sculptures and mixed media collages.
The Gallery at Mercer is located on the second floor of the Communications Building on the West Windsor Campus, 1200 Old Trenton Road. Directions and gallery hours are available at www.mccc.edu.
The winners of 16 awards were announced at an Opening Reception on March 13. Participating in the awards ceremony were County Executive Brian Hughes and Mercer County Freeholder Pat Colavita, representing the Mercer County Cultural & Heritage Commission, which co-sponsors the exhibit. Also presenting was West Windsor Arts Council Executive Director Arin Black, who selected two West Windsor artists, Renee Kumar and Janet Fulton, from 14 West Windsor artists featured in the show.
Hamilton resident John Szabo, a 1987 alumnus of MCCC’s Advertising Design program, earned the Utrecht Art Supplies Best in Show award for “Unfit Survival,” one of two paintings he had accepted for the show. Attributing his inspiration to science fiction, Szabo said he captures themes that suggest the world is going in the wrong direction.
Mic Boekelmann, of Princeton, didn’t have to look far for inspiration for her two paintings selected for the show. They are portraits of her children, Max, 14, and Luisa, 8, who attended the exhibit with their mom and say they were proud to be her models and to be included in the show. Boekelmann’s painting “Max” won a Juror’s Choice Award. “This show is a nice opportunity for the art community,” she said. Boekelmann works out of a gallery in Hopewell, a space she shares with several other artists.
Inspiration sometimes originates from the most unexpected places. Trenton resident Arlene Gale Milgram’s “Dark Thoughts,” a mixed media on wood that received an Honorable Mention, was inspired by Milgram’s having broken a bone recently. “This is the last in a series of six pieces that suggests systems falling apart and incorporates imagery of scars and bone totems,” Milgram explained.
Margaret Miller, of Lawrenceville, who entered the show for the first time, was selected for a Mercer County Cultural & Heritage Commission Purchase Award for her oil painting “Autumn Tide.” “This was a wonderful first experience,” she said, adding that she was thrilled to have won a prize and beamed when another visitor deemed her painting “the best work in the show.” She notes that she has taken art courses at MCCC in the past and had focused on crafting before recently turning her creative energy to painting.
Said Princeton resident Priscilla Snow-Algava, a past award winner whose monoprint “Dance for Oneself was accepted for this year’s exhibit, “This is my favorite show. I like the space. I always feel good when I come here. It’s an honor to be part of this community of artists.” Retired from teaching, she now pursues her art full time in a studio space in Princeton.
Long-time painter Lynne Faridy, whose acrylic painting “Old Oaks” is featured in the show, perhaps summed it up best as she described her long-time passion for creating art. “There is problem-solving involved. I have an idea and I want to execute it. I like light and atmosphere and that’s what I try to capture. When I paint, there is nothing wrong with the world.”