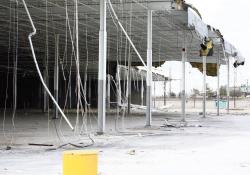 The former Sam’s Club on Route 18 in East Brunswick is being demolished to make way for a new Walmart supercenter that is slated to open next year. THOMAS CASTLES I n the face of the recession that left so many storefronts forlornly vacant, two Walmart stores are setting up shop along the Route 18 corridor in East Brunswick and Old Bridge.

The two stores certainly aren’t the first big-box retailers to spring up in central New Jersey — there are about 12 Walmarts within 20 miles of East Brunswick, including one on Route 9 in Old Bridge, and many Targets, KMarts and Costcos to boot — but they will be the first Walmart stores on Route 18, strategically located near the northern and southern borders of East Brunswick’s retail corridor.

“Both stores will be supercenters … and will carry a full line of groceries and other merchandise,” Walmart Director of Communications Bill Wertz said. “Both will have around 250 to 300 associates, most full time.”

The East Brunswick store is being built on the so-called Golden Triangle property at Route 18 north and Tices Lane. The property was formerly home to Sam’s Club, the Route 18 Indoor Market and Jason’s Furniture. Those three stores were all tenants in the same 236,809-square-foot building, which is being demolished.

The east end of the property, which was used for a commuter parking lot until the adjacent parking deck was built, will be the site of an approximately 400-unit, multistory apartment complex with internal parking, according to East Brunswick Mayor David Stahl. Most apartments will have either one or two bedrooms, he said.

“The [apartment complex] property is already creating revenue for the township, which takes some of the burden off homeowners,” he said.

The Old Bridge store will be built on the former site of Fun Mania, an indoor amusement facility and outdoor mini-golf course, and the Legends Golf pro-shop, putting green and driving range. Both buildings, which were located at the intersection of Route 18 south and Spring Valley Road, were demolished in late March.

The 150,000-square-foot Walmart, complete with a 7,200-square-foot outdoor garden center, will be constructed where the driving range was previously situated. Most of the property closest to Route 18 will be made into a 770-space parking lot.

Three drainage basins will be constructed to remediate water runoff issues in the area, which is surrounded at several points by wetlands. The basins were a point of contention for Old Bridge Mayor Owen Henry, who sat on the Planning Board and voted against the project when the original site plan was reviewed. “The town didn’t get enough back in return [for the project]. I thought the town should’ve gotten some more offsite improvements. Some of the residents in the area needed some drainage improvements and stuff like that. But if they didn’t build [the Walmart] in Old Bridge, they probably could’ve built it in Marlboro or somewhere to the south, and we would’ve gotten nothing for it,” Henry said.

Site plans in Old Bridge also include the extension of Spring Valley Road, which will run along the north side of the property and connect Route 18 to Marlboro Road, which serves as the property’s western limit.

Mayors Stahl and Henry agreed that the new Walmart stores would generate sizable revenue for the town. They disagreed with the idea that the introduction of the big-box stores would threaten small businesses in the area.

“I’m a capitalist at heart,” Stahl said. “If you work your business hard and never take your successes for granted, then you will be successful. Competition is not to be taken lightly, but we all have to adapt to survive in this climate, and so do businesses.”

Henry said the Walmart on Route 9 in Old Bridge has had a positive impact on the town.

“If you’re competitive and you’re good at what you do, you shouldn’t be afraid of competition.

[The new Walmart] is going to be bringing a lot of people into town. Maybe people will stop at the Walmart and then stop at a restaurant to eat dinner,” he said. “I think, in the long run, it’ll be good for the town.”

The plans for both new Walmarts were met with varying public resistance and support.

Henry said several residents of nearby Foxborough Village in Old Bridge complained that Walmart-related traffic would clog up nearby roadways. Local business owners said the store could cost them their businesses.

East Brunswick resident Lloyd Shepetin voiced his concerns about the incoming Walmart in a letter to Greater Media Newspapers.

Walmart “can have a negative impact on local economies,” he wrote, noting reports about the company’s wages and absence of unions. “What do you think will happen once Walmart opens its doors? Smaller stores won’t be able to compete and will be forced to close.”

But, the mayors said, many residents of their towns are excited about the opportunity for one-stop shopping at affordable prices.

Wertz said a firm opening date could not be determined for either building, but he speculated that both stores would likely open their doors in spring or summer 2014.

“We are looking forward to the opportunity to bring jobs and affordable shopping options to both Old Bridge and East Brunswick,” he said.