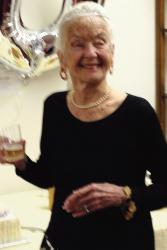 Carlotta Niles Carlotta Niles spends a great deal of time reading, cooking for company, enjoying the arts and theater, and playing bridge. She drives a Mercedes-Benz convertible and enjoys an occasional margarita. She still wears high heels to parties and embraces life with gumption and adventure.

Whether it has been her attitude, her guts, her personality, her genes, or all four, this gracious lady reached the age of 100 on May 27 and shows no signs of slowing down.

On a recent Saturday morning in Freehold Borough, Carlotta met up with about 40 other bridge players for her weekly game at the YMCA Community Center, Center Street. Her fellow card players celebrated her 100th birthday along with the birthdays of other members who were born in May, including Ed Fisher, 63, and Eli Duttman, 68.

Carlotta, who is a resident of Shrewsbury, was dressed in a red and black flowered print long skirt, black top and slingback “peek-a-boo” heels, and looked very much the gracious lady her fellow bridge players say she is. With an infectious smile and a well cultivated sense of style, Carlotta has crystal blue eyes that apparently do not need glasses to see the cards.

Cards and flowers graced Carlotta’s bridge table, greetings from her fellow players. The birthday party was arranged by bridge club organizer and player Arline Fulton of Freehold Borough, who prepares and serves refreshments every week for the players.

“Bridge keeps you from getting old,” Carlotta said. “Playing bridge not only keeps you mentally fit, but also helps you physically. When you are concentrating on the cards it keeps you from doing anything bad. I have a very ordinary life. I am lucky to be here.”

Sharing some of her life experiences in an interview, Carlotta Niles’ life seems anything but ordinary.

Carlotta is the daughter of June Elvidge, who was a star of silent films, and Roy Ramsey. In addition to her other film credits, Elvidge had a minor role in the 1922 film “Beyond the Rocks,” which starred two iconic silent film stars, Rudolph Valentino and Gloria Swanson.

“She played a vamp in the movies, so I was never allowed to see them,” Carlotta recalled of her mother’s appearances on film.

Carlotta said she is lucky to have seen some of her mother’s films since the advent of the Internet.

“My daughter found films on the Internet about five years ago, and we went to a film showing of one of her movies that had been restored. It was shown at the Museum of Modern Art and it was a lovely time,” she said. Carlotta was born in New York City and was raised by her maternal grandparents in Matawan because her mother traveled all over the country acting. One of her favorite memories is seeing her mother step off a train from the parlor car dressed in furs and finery.

“I remember seeing her walk down stairs the porter had pulled down for her,” Carlotta said of a memory she has from the time she was about 9 years old.

Elvidge was a trained singer and performed on Broadway before making her mark in silent films, according to Carlotta.

“I thought about going on the stage, but mother wouldn’t have it. She said I would never have a normal life,” the centenarian said.

Carlotta attended one year of school at Boston University on a course to become a physical education teacher, but life took her on a different path, which included falling in love and marrying cub reporter Jonathan Niles in 1931. Niles later worked for the Associated Press and the Wall Street Journal.

Over the years, Carlotta said, she has taken enough college courses to have earned a degree. From language to history, to art, literature and geology, among others, learning has always been a part of her life.

Carlotta has lived in the same home in Shrewsbury that she and her husband built in 1935. She said she has always considered exercise a very important part of her life, as well as “keeping busy,” which she said is paramount when an individual gets older.

“Some people close off their world and stop doing things little by little when they get older,” she said. “Pretty soon, you end up not doing anything at all.”

“Find something you love to do and then do it.”

Playing duplicate or competitive bridge is something she loves to do at least twice a week.

She said she always wanted to play the game, but her husband, who died in 1987, had no interest in it.

After their husbands died, Carlotta and Jonathan’s widow, Barbie, had a lot of time on their hands and needed to find something to move forward together. Bridge was the answer for Carlotta. In addition to playing bridge, Carlotta found traveling helped to fill the void of time.

“I always loved to travel, and my husband was a wonderful traveling companion, but he only liked going to Paris and London. I wanted to see the world,” she said.

After Carlotta’s husband died, she and Barbie set out on adventures that led them to every continent except Antarctica and Australia. Carlotta discovered a passion for hot air ballooning, which she did in Italy, England, France, Turkey, the Czech Republic, Kenya and Austria.

Her travels included an overnight visit to an ice hotel in Lapland, Greenland, and her favorite trip was to St. Petersburg, Russia, which she took shortly after the Sept. 11, 2001, terrorist attack on America, when some people may have been loath to fly overseas.

“You cannot give in to fear,” she said emphatically.

Carlotta speaks French and Italian, does crossword puzzles, plays chess, and will play any game someone challenges her to, according to her granddaughter, Betsy Ford.

“Carlotta is very competitive, as we all know. She played team tennis at the Sea Bright Lawn Tennis Club and platform tennis at the Deal Golf Club. She played tennis well into her 90s. She has become passionate for bridge over the years and has spent countless hours and dollars honing her skills,” Ford said, adding, “She believes you can always do better.“

This inspirational woman is guided by what she wants to do, not by what is expected of women her age. She continues to drive her Mercedes-Benz, wear high heels, entertain and cook for friends, and is looking forward to the weekly bridge club she hosts at her home in the summer.

Ford summed up her 100-year-old grandmother by saying, “She is fearless.”